On the ocean planet of Castilon, teams of sky racers live and compete in and around a massive floating structure called the Colossus, which somewhat resembles the atoll from Waterworld if it were higher-tech and existed in the Star Wars universe. As the teams compete to build the fastest racers to fly through rings suspended in the sky, word gets to the Resistance that there’s a First Order spy somewhere aboard, helping the new sinister faction prepare for a major attack against the Republic. Before the events of The Force Awakens, ace pilot Poe Dameron sends his trusty droid BB-8 and new recruit Kazuda Xiono (Christopher Sean) to join a team and see if they can catch the spy before it’s too late.At a recent press event for the new Disney XD series Star Wars Resistance, we learned a few more things about the show: 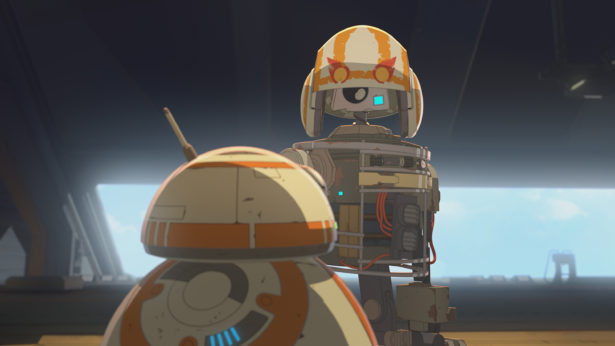 Star Wars Resistance takes place six months before the sequel trilogy begins, as the pilot episode concludes with a look at the nearly complete Starkiller Base. Not unlike in the original Battlestar Galactica, there’s conflict in the Senate regarding whether or not the First Order can be negotiated with as if they were mere political rivals, or something far worse. Kazuda’s father believes in the former, and is thusly reluctant to see him off on a spying mission. As Sean told us,Â “It’s a huge galaxy and we’re telling part of the story. A bridge of the many.”Head writer Brandon Auman added, “We’ll always ask Pablo [Hidalgo, head of continuity] and Dave and anyone who knows any of the deeper secrets of what’s going on with some of the modern movies, to help connect the dots at times when we need that. But the great thing is we get to carve our own way.”Obviously BB-8 has to return to the main saga before all is said and done, but Resistance makes clear that he has a history of bonding with complete strangers at Poe’s behest. 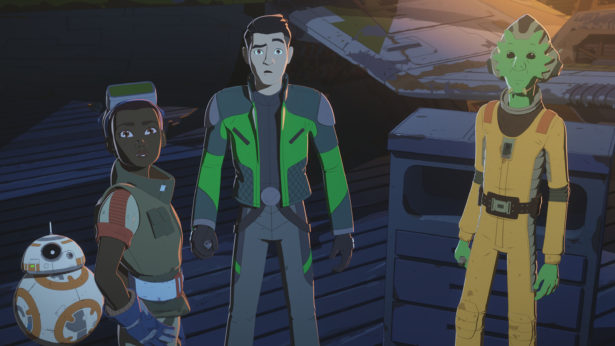 Bobby Moynihan plays Orka (not pictured), a Chadra-Fan mechanical parts dealer who’s somewhat sloppy, while his partner Flix (Jim Rash) is more fastidious. If their names seem somewhat familiar, it’s because “they’re kinda like Felix and Oscar, the Odd Couple!” Moynihan said. “[Flix]Â is much more serious; he’s the brains of the group and I’m the muscle, so we just settled into this Brooklyn-y kinda blue collar guy [for Orka], which hasn’t been really represented in the Star Wars universe, so it was fun to do that.” Moynihan had previously tried out for a couple of roles on Rebels, but Filoni had kept him in mind for subsequent projects. 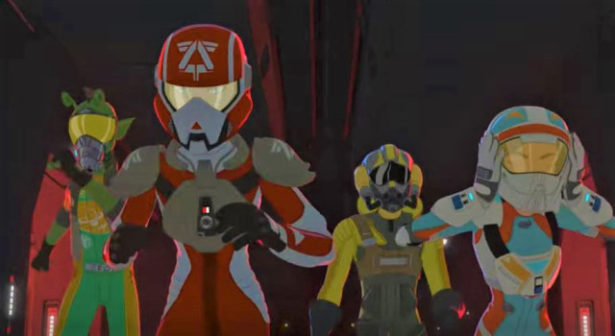 Donald Faison plays a Rodian pilot named Hype Fazon, so named because he was the only choice for the role. “When I went to the recording studio they showed me the layout of the character,” the actor said. “And they said to me, ‘This is Hype Fazon.’ I was like, ‘I’m sorry, great picture, great character…did you say Hype what?’ Fazon. I’ve lived my whole life for that day. It went from, ‘Aww man, I’m not Lando?’ to, ‘I’m Hype Fazon!’ Ten times better. It’s my name!”Obviously, we had to ask if he has anything in common with Greedoâ€”do his engines, perhaps, fire first? “He always finishes first, how about that?” While castmates like McGrath speak highly of Faison (“When Donald turns up, you know it’s gonna be fun”), he prefers to work alone in the sound booth. Faison said, “I don’t want to make anyone wait for me, and I feel like when I’m with a group of people, that’s what’s gonna happen.” 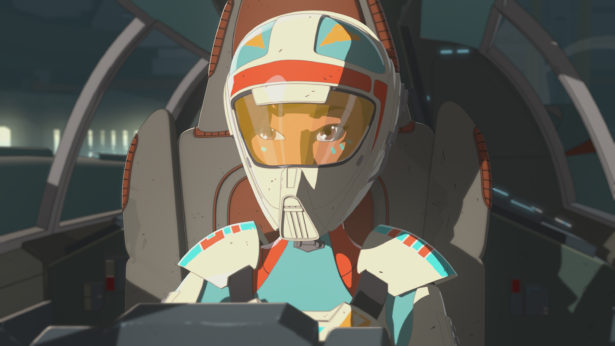 The shift from the pure CG of The Clone Wars and Rebels to cel-shading is a move to capture a younger audience, as fans who grew up with those shows are now older. “It was really influenced by a lot of the anime that came out in the ’70s and ’80s,” said executive producer Justin Ridge, “like Robotech, Macross, Lupin III.Â And so we wanted to do our own version of that for the show.Â We definitely want to give it our own twist…because it has a light-hearted, comedic tone, the characters are more expressive, the body breaks can squash and stretch more, so it’s kind of a cool hybrid.”Auman added, “It’s gotten very popular in Japan. [It’s] a well-known, respected technique, but then it just looks really cool.”Skewing younger also means the aliens will mostly be speaking English. “I don’t think kids could understand Rodian if it was put up on the screen,” Faison said. 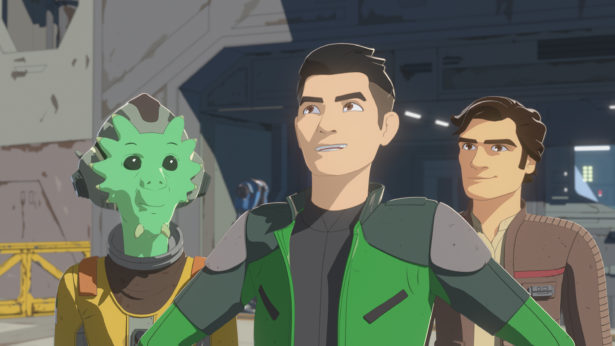 Christopher Sean is the first Asian-American male lead in a Star Wars project, andÂ  Suzie McGrath is among the first women of color to take on a major role in the franchise. Both are very conscious of the significance. “When I was a kid, I didn’t have a particular role model that wasn’t stereotypical; Bruce Lee or Brandon Lee doing martial arts,” Sean said. “You can probably count the Asian leading men in Hollywood on one hand. So now, to have inclusion, it shows that…this is a normalcy in America, and now we’re portraying that so these kids say, ‘Hey, that’s me, I’m not different, I am part of the Star Wars world, I’m part of all these worlds.’ And now we all feel we’re, A: more cultured and, B: we’re now what America is.”McGrath said, “I hope that there’s some young girls out there that can relate to Tam, and that she can help them.” The actress expressed great excitement to see fans eventually cosplay as her. “It’s a cool one, because there have to be some pockets in there, and she’s got her bandana, and gloves, she’s very resourceful.” She’s also pleased to be reclaiming English accents for the good guys.So what kind of role model will Kaz be? Sean breaks it down: “I definitely take in Han Solo’s charisma, Poe Dameron’s instinct, and, my father being military, I take in the regimen. I take in the respect, and then of course I take in my silliness and my clumsiness, and I throw it all in and there’s Kazuda!”Star Wars Resistance debuts on Disney XD this Saturday, October 7.