Before Star Wars Rebels premiered in October 2014, Disney XD and Lucasfilm released a series of character shorts. The one focused on Chopper, “The Machine in the Ghost,” gave us our first hint at a relationship between pilot and leader Hera Syndulla and the Jedi Kanan Jarrus. The astromech walked into the cockpit and seemingly interrupted a smooch. The Kanera ship has been sailing strong since then, but even though the characters have had many almost moments, they only kissed for the first time on screen in the season four episode “Kindred.”

Over the last four seasons, executive producer Dave Filoni and voice of Hera Vanessa Marshall have talked about how both characters, especially Hera, have been focused on the bigger issues at hand, namely fighting the Empire. In talking with Nerdist about getting to bring this moment to the screen, Filoni explained, “I’ve always felt there was this inevitability to it for me. We’ve given a lot of thought to it, and something that I really like is how Hera is very focused and independent and not apologetic about what she has to do, because she’s the leader. And it should never be this thing where she is having to sacrifice anything of who she is, for being in a relationship.”

“She loves Kanan, obviously, in her own way and he loves her, and what they both like about each other in some ways is why they aren’t completely together. I like that they have this very mature adult relationship that deals with the world around them, or what they need to do for other people. But there is something…you might know the way these people feel inside as the audience, or you might hope that they feel this way that you do about them. It’s like seeing two friends of yours get together after a long time, and you’re like, ‘Oh, thank God!'” he continued. 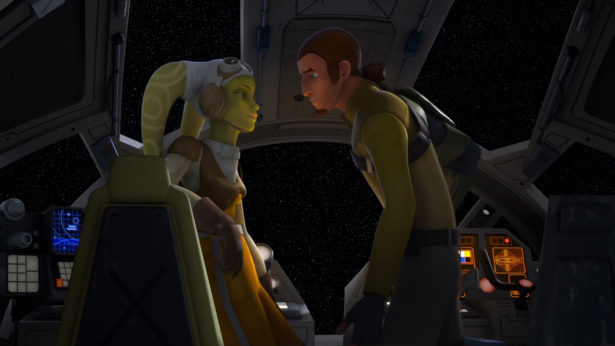 But now the timing is right. “A lot of elements came together for that to be the right moment for it to happen, not the least of which is she gets to say to him, “May the Force be with you.” Which I think has many levels, coming from her in that moment. Because it’s also in a way nodding to the fact, respecting that he’s a Jedi,” he said. “In short the answer is, yes, it’s really thrilling for the whole crew to see that happen and have that moment come together. So let’s see where it goes.”

As the crew worked on developing Hera and Kanan together, Filoni gave them some music to be inspired by. “There’s some songs I use to focus my mind on their relationship, in particular. Some lyrics that really…because I was always like, ‘How do I define for people what this relationship is?'” he recalled. “I would get these songs and I’d tell the crew, ‘You have to listen to this song, listen to the lyrics, hear the lyrics. This is what she’s thinking, this is what she’s about.’ And then there are other symphonic pieces of music that I listen to and I’m like, ‘This really pulls it, the drama of what I feel these two are about.’ I really like these characters, I like the people that play them. I think they’ve just done a great job at bringing these characters to life. One day, maybe when we’re done, when we’re through, remind me and after the season and I’ll tell you what the songs were.” 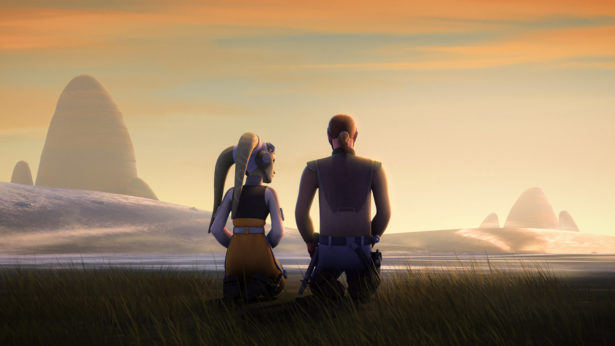 Have you been shipping Hera and Kanan? What do you think will happen to Kanan in the final episodes of Star Wars Rebels? Tell us your theories in the comments.