With each new entry this season, Star Wars Rebels has been shaking fans to the core. Between intimate character moments, surprising cameos from some of the galaxy’s most terrifying villains, and the death of a beloved character, the team behind Rebels isn’t holding anything back. But they’ve outdone themselves with the bombshell introduction of canon time travel in the most recent episode, “A World Between Worlds.”

The episode revealed a dimension that added layers to Obi-Wan’s iconic quote about the Force: “It’s an energy field created by all living things. It surrounds us and penetrates us; it binds the galaxy together.” Presenting a dimension in which all of history, past and present, is accessible via the portals in the Lothal Temple, Rebels exploded the notion of time and space as we knew it in the Star Wars Universe!This obviously has huge ramifications for Rebels and the final three episodes of the show, but it could also mean massive changes in the main Star Wars continuity, especially in the upcoming Episode IX. Why introduce something this groundbreaking and game-changing into a show that’s about to end? Strap into your Corellian YT-1300f light freighter, because we think it’s pretty likely that time travel is coming to J.J. Abrams’ finale of the new Star Wars trilogy! It might seem a bit outlandish to suggest that Episode IX will introduce Force-enabled time travel, but when you start to think about the way we’ve seen the Force change and grow within the new Star Wars canon, it actually makes sense. The Last Jedi spent lots of time introducing us to new Force abilities, from Rey and Kylo’s telekinetic connection to Luke’s astral projection in the final battle of the film. These radical uses of the Force were controversial, but very much in keeping with the Lothal Temple and its powers.

The Temple contained a secret dimension that held every moment in existence in one place, all accessible via circular doors (and, of course, the Force). And if there’s a centralized source where all of the moments in Force history collide, it would make sense that people strong with the Force could harness that power to connect two minds across the galaxy or project themselves to another place or time.

Since it was announced that J.J. Abrams would take over the final installment of the new trilogy, rumors about just what his plans might be have been plentiful. A fan on Reddit claimed to have met Abrams and asked him about the trilogy, saying that the director told him Episode IX “is also the film which unites all three trilogies and brings everything together.” Vague, yes, but an incredibly interesting statement after Rebels’ big reveal.

How easy would it be to introduce the portals seen in the Lothal Temple as a way of connecting the three eras of Star Wars? There’s been a lot of speculation about the potential for the film to be set a long time after The Last Jedi, in which case once again time travel makes a lot of sense, either to explain a time jump or connect the newer story to the stories of the past. 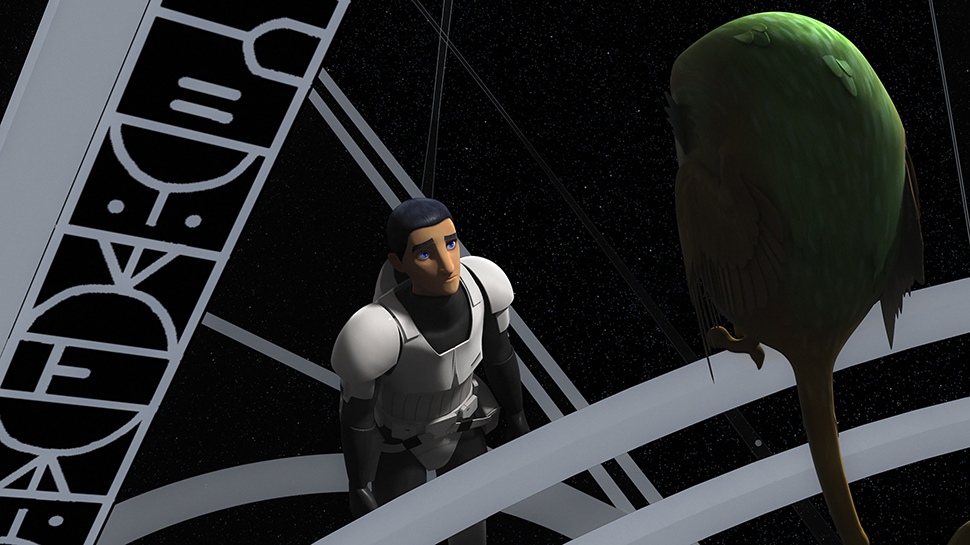 Star Wars Rebels and other contemporary non-film canon have already been used to introduce things that would later appear in films. Greg Rucka’s Shattered Empire comics introduced the parents of Poe Dameron and their Force trees, which would end up playing a role in The Last Jedi. Claudia Gray’s fantastic Leia, Princess of Alderaan novel introduced fans to a hero of the resistance, Amilyn Holdo, months before we met her in The Last Jedi.

Rebels also teased the controversial Force flight before her royal highness Princess Leia made us all cry and saved herself during that same film. So why wouldn’t the team use the final episodes of a beloved and critically acclaimed animated show to sow the seeds of a concept that will change the shape of the filmic galaxy forever?

This would also be a great chance to see the world of Rebels fully integrated into the main Star Wars film canon. Though there’ve been nods to Rebels in the live action films—in Rogue One, the Ghost ship can be seen over the battle of Scarif, and Hera’s droid chopper is seen on Yavin 4—this could be a chance to bring in major lore and locations.

What if Episode IX saw Rey, desperate for answers, heading to find the Lothal Temple after the destruction of the Temple on Ahch-To? Or perhaps Kylo discovers an old hologram that mentions the Temple and its powers, and heads there to try and connect with his grandfather? The possibilities are honestly endless.

Do you think Abrams is brave enough to bring time travel into the Star Wars films? Can’t wait to see the Rebels finale next week? Just wanna see Qui-Gon, Han, and Ahsoka go get a sandwich together? Let us know below!