Star Wars LEGO Builds So Huge, They Probably Have Their Own Gravity - Nerdist

Star Wars LEGO Builds So Huge, They Probably Have Their Own Gravity

LEGO offers deluxe sets in its Star Wars line, sure, but there’s definitely a limit as to how big and detailed they can get. Why, nobody would reasonably expect the average buyer to build a Nebulon-B Medical Frigate that’s to scale with the Empire Strikes Back effects model, composed of thousands of bricks, and with no manual to guide its construction? Right?

Lucky for us, and our viewing pleasure, Morten Svendsen is no LEGO dabbler. He’s a master builder. And he’s thoroughly photographed his magnum opus from many angles, so we can appreciate it in all its awesome complexity. Look closely at this pics, and you may notice a proportionately-sized Millennium Falcon docked in some little nook. Or you may even see a tiny viewing deck, wherein the heroes of the Rebel Alliance are posed just as they were at the end of ESB.

The Frigate is reportedly culled from over 500 other sets. Our minds tremble at the amount of pattern recognition needed to see such a grand starship in all those disparate pieces. And they tremble double-time when we behold this other great work Svendsen’s crafted in his foundry. LEGO has sold Star Destroyer model sets before, certainly, but have they ever been as colossal as this? 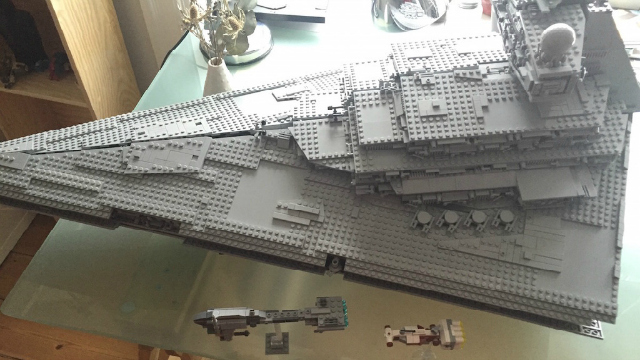 More than a little wizard, yes? Now, look at all these other photos from Svendsen’s gallery. The hyperspace engines. The communication towers. The turrets. All on a craft that takes up an entire table, and dwarfs a Rebel Blockade Runner model that’s already pretty impressive on its own.

If the LEGO Batman Movie kills next year, and we eventually get a Star Wars riff, it’s hard to imagine how the official models could ever be more impressive than these.

Could your LEGO creations compare? What other movie-inspired builds out there on the internet defy the definition of “hobby?” Fill the talkback with recs. We want to see them!