Despite the fact that Star Wars appears to have numbers and letters derived from a classic Latin alphabet, with droids named R2-D2 and BB-8, etc., the written language we see used in the films is actually called Aurebesh. You see it all over the consoles of Imperial technology and on the Rebel bases, and is the most commonly used language in that galaxy far, far away. It’s also used to create tons of Easter eggs, specifically in the animatedÂ  Clone Wars and Rebels. Now, fans can pretend they are making the calculations for the jump to light speed, thanks to theseÂ officially licensedÂ Star WarsÂ Galactic Empire DSA Keycap Set from NovelKeys. 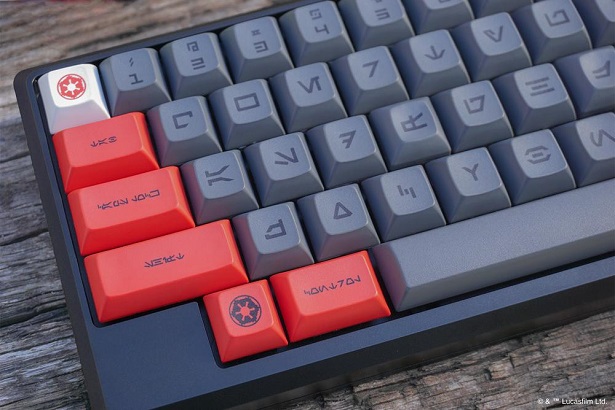 There will be two different kits offered: one for the hardcore Star Wars fan who knows their Full Aurebesh, and one in Aurebesh with English sub-legends. We imagine the second one might be a wee bit easier to use, at least for those of us on backwoods planets like Earth. Both kits come complete with ten unique novelty keycaps to show your loyalty to the Empire. And make no mistake, these are Imperial keycaps! No Rebel Scum here allowed here. There’s a Death Star, a Darth Vader head, Vader’s saber, and an Imperial Stormtrooper helmet. And, of course, the official symbol of the Galactic Empire.

Preorders have begun for these unique keycaps will run from December 10, 2018 to January 5, 2019, with estimated shipping in April or May of 2019. These will set you back about $250 per set. This set will only be available for the United States, Canada, Puerto Rico, and Guam.