The next era of Star Wars is here. With an array of new books and comics, The High Republic has arrived and it is glorious. After a huge launch, The High Republic #1 sold over 200,000 issues to comic book shops, and the second issue of the awesome action comic from Cavan Scott, Ario Anindito, Mark Morales, Annalisa Leoni, and Ariana Maher is on shelves now. Recently we sat down with the issue’s writer, Cavan Scott, to chat about the first issue’s success, his horror influences, and what fans can expect as the event series continues.

The massive response to issue one 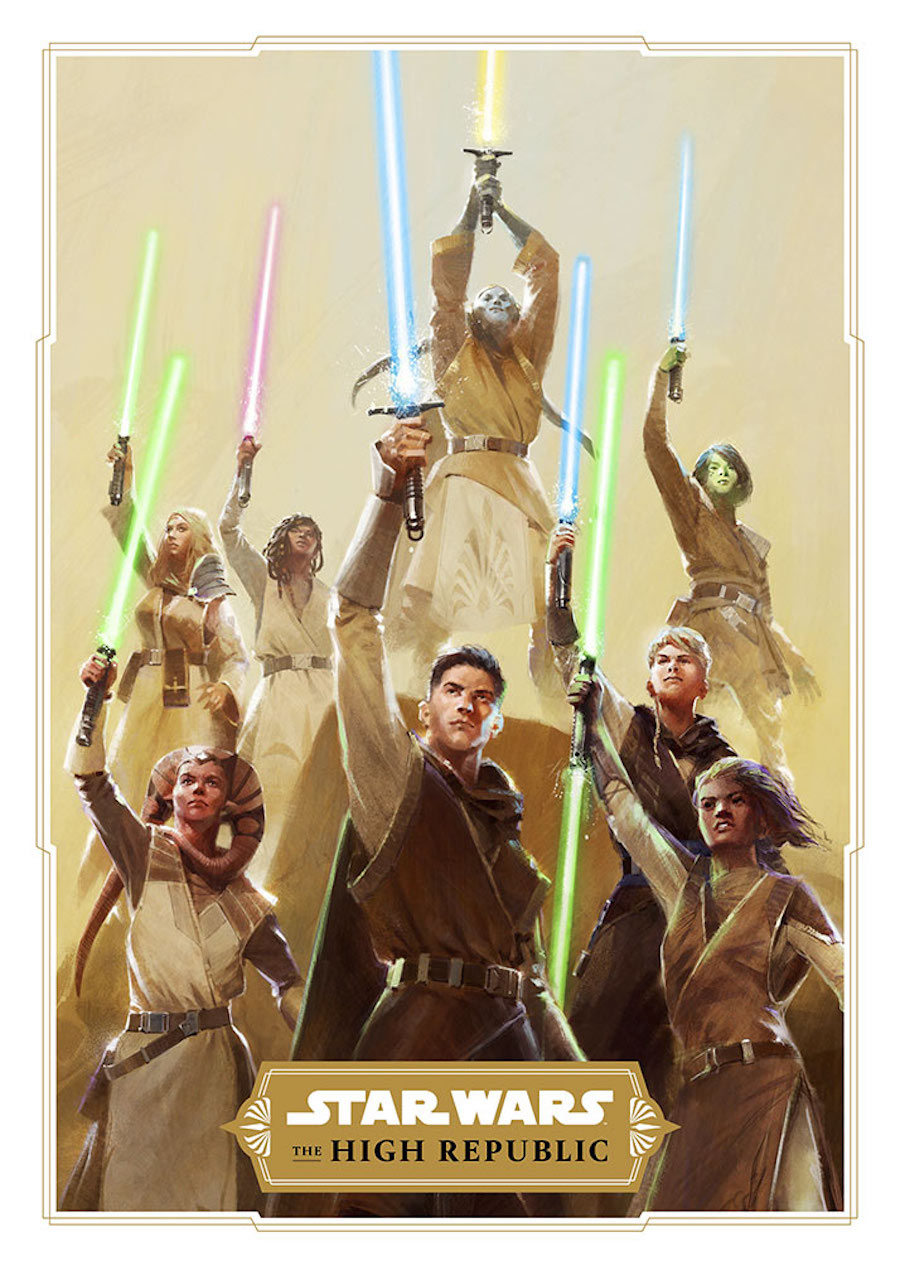 It’s pretty rare for a comic to sell in the hundreds of thousands these days. But The High Republic did just that. On the other side, the fan reaction has been passionate and positive. So what’s that been like for Scott? “Frankly, a bit insane,” Scott told Nerdist. “We’re on our third printing now and I keep getting tweets from people who are really happy to find one of the earlier printings in shops. It’s like they’ve gone to an old temple and found treasure from ancient times, which is amazing. It’s a relief that after years of work it seems to be landing.”

Issue one is selling out in shops everywhere, but don’t worry if you haven’t found it yet. Issue two works as a jumping on point. “In fact, the story in issue two was my original plan for issue one,” Scott shared. “Issue two throws Keeve into her first mission as a Jedi Knight. She’s working alongside a couple of new Jedi on the station, Ceret and Terec, along with Jedi Master Sskeer. That was going to be issue one, but it didn’t feel right. We all felt that we should take a step back and actually see the moment where Keeve becomes a Knight. So, in a lot of ways, issue one was the pre-title sequence, so you can absolutely jump in on issue two. Even though issue one is still important for understanding where Keeve comes from and her relationship with Sskeer which becomes a major part of this arc.” 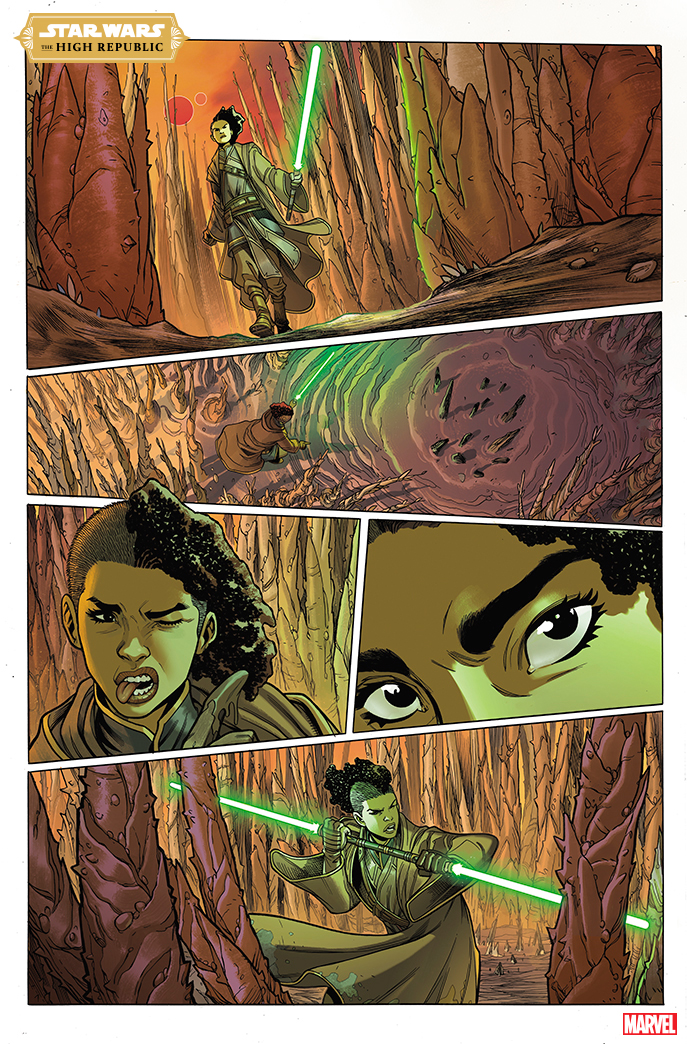 Digging into The High Republic #2

While the opening of The High Republic comic series was a tone-setter for the new world where Jedi rule and are worshipped as heroes, the follow-up is a deep space adventure. According to Scott, that tone shift was key. “We now see Keeve thrown into a world that she didn’t really expect. She would have seen danger before. She would have been in situations like it before. But now she’s feeling the added pressure that she’s supposed to be part of the light for this part of the galaxy. That’s the whole reason that Starlight is there. And on her first mission they find something that they don’t expect, and they realize how dangerous the Nihil can be.”

The villainous organization of the Nihil is the key antagonist in the sprawling event series, as Scott explained. “In the wider story, if you’re reading Charles’ novel and Justina’s novel, the Jedi at this point think they’ve sort of dealt with the Nihil. But this is the beginning of realizing perhaps they haven’t gone away, and perhaps they had a bigger hand in everything that happened.” 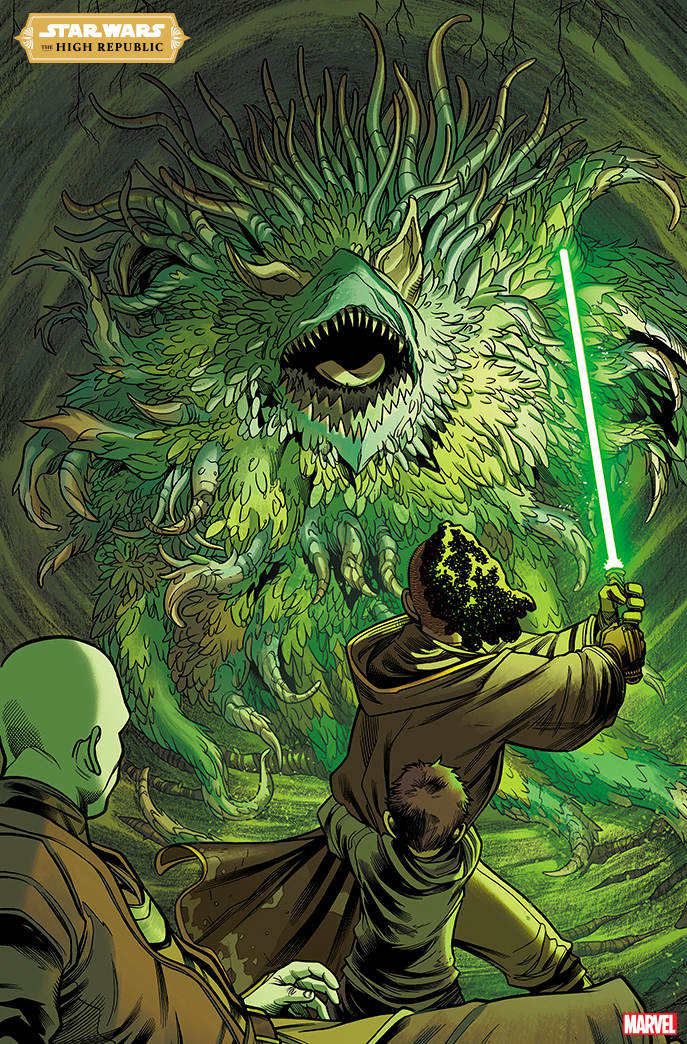 The High Republic #2 also establishes another key part of the series: a group of Jedi working together. It’s something we’ve rarely seen in Star Wars lore, as we usually see the ruined order and their struggling remnants. Here, though, new recruits and possible friends join Keeve. “That was important. We wanted this to feel like a team,” Scott said. “On this particular mission you have Sskeer, who has been her master since Keeve was a child, and suddenly she’s his equal. And she’s immediately noticed there’s a difference in him. So, you know, their relationship is definitely a bit more rocky than she’s used to. Then we have Terec and Ceret, who are characters we came up with quite early on. They’re a pair of bond-twins who pretty much almost share a mind across two bodies. It’s not really clear where one begins and the other stops.”

If you’ve been reading the other stories in The High Republic event, then you can expect to see some familiar faces in issue two as well. “We start to see Jedi who first appeared in Justina Ireland’s book [A Test of Courage]. And Vern and Imri, they have a little tiny cameo in this one as well. So it’s drawing together all those characters. I think this is the point where you start to realize all those first books we had in the first wave introducing all these characters are interconnected. And they all center on Starlight going forward.” 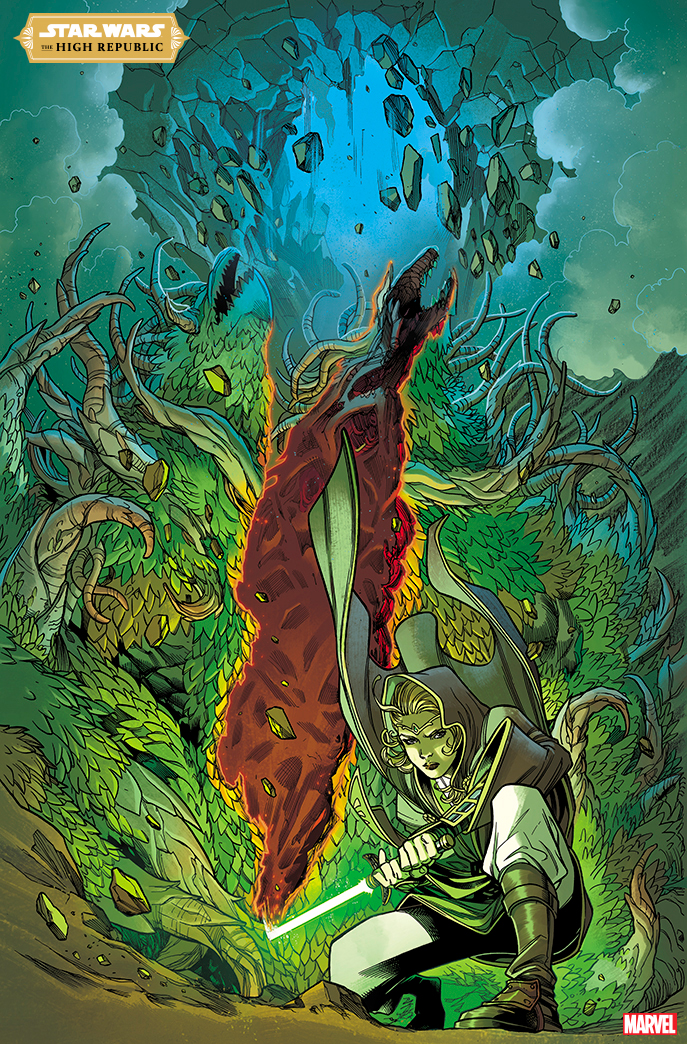 Dipping into horror and where the series is going next

Scott’s first introduction to Star Wars was the awesome ’70s Marvel Comics series. The High Republic feels in very much the same vein. So far each issue has shifted in tone and feel, with the second entry leaning hard into horror. “If you ever get to see one of my scripts, it’s just packed with, ‘Remember that bit in this film?'” Scott laughed. “I’d say we go full Children of the Corn here. The good thing is that Ario [Anindito] is a massive horror fan. So as soon as I say that, it’s such a great shorthand and he knows where we’re going.”

As for the bigger ongoing mystery in the comic series, right now it has to be the strange changes going on with Jedi Master Sskeer. While Scott couldn’t tell us everything, he did tease what’s to come. “All I will say is that Keeve isn’t the only one with insecurities. And something is happening to Sskeer that he’s afraid to admit. One of the touch points for all of these stories was the question we came up with: what scares the Jedi? As we know, fear leads to the dark side. That doesn’t mean the Jedi aren’t scared. They still fear and it’s how they deal with that fear that makes them a hero. That makes them strong because fear still exists in their life. With Sskeer, it’s not something he’s done. It’s something that’s happening to him. And it’s something he doesn’t think you can control.”