Since Disney bought Lucasfilm in 2012 the company’s done a fantastic job at crafting an expansive and wide-reaching canon including the new films, brilliant books, animated series, and shorts like the lovely Forces of Destiny series. And now, they’re trying something new. Lucasfilm has announced the launch of a new kid focusedÂ  websiteÂ and YouTube channel, called Star Wars Kids, with a trailer for a gorgeous-looking new series of animated shorts called Star Wars Galaxy of Adventures.

Lucasfilm describesÂ Star Wars Galaxy of Adventures asÂ “a new series of animated shorts that will introduce the classic themes, pivotal moments, and iconic characters from the Star Wars saga to the next generation.” From the teaser trailer it’s clear the series will focus on and expand upon classic moments from the original trilogy in a striking animated style that seems reminiscent of anime and classic French animation like Time Masters. 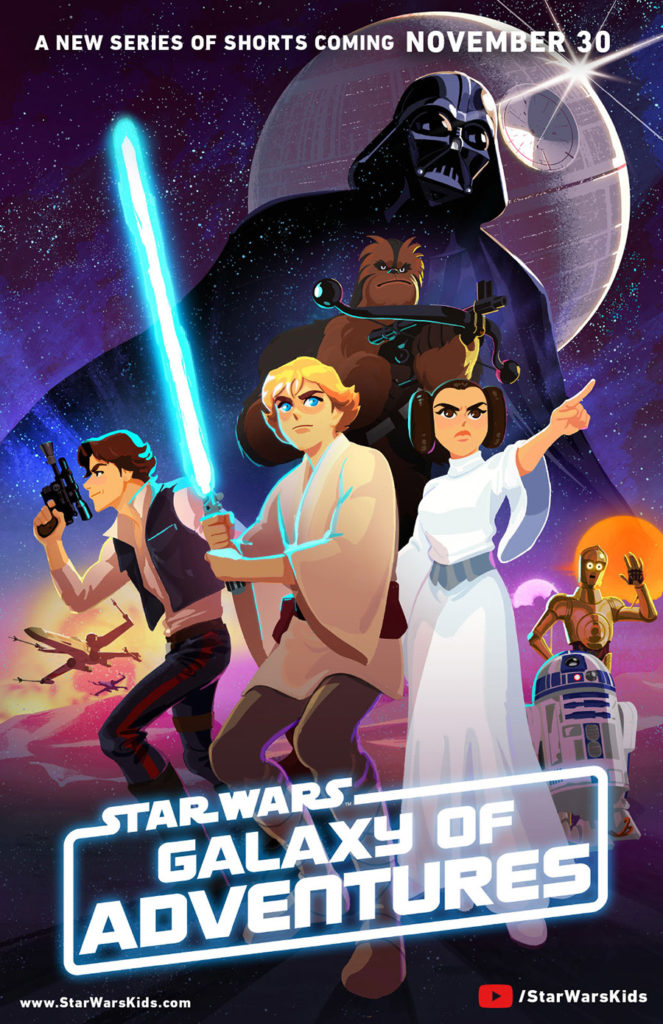 Over at StarWars.com James Waugh, Lucasfilmâ€™s vice president for franchise content and strategy, explained the vision and thought behind the series. â€œGalaxy of Adventures is a fresh way to introduce an entirely new and younger generation to those concepts, characters, and themes.â€ He continued, â€œCreating content that is unabashedly for kids in this bite-sized, unique animated form, allowed new moments to evolve out of the old, new ways to look at the content, and ultimately expanded the potential of how Star Wars should look and feel. Hopefully it expands the horizons of younglings everywhere on their path to becoming Padawans and ultimately Jedi Knights.â€And now you can watch all of the shorts over atÂ  Star Wars Kids, or right here, as we run down all seven vignettes!

The first of the series confirms that the shorts utilize iconic audio from the original films, and animate around it. “The Journey Begins” is the perfect introduction to the concept. We see Luke Skywalker dreaming of becoming a Jedi, and being given his father’s lightsaber. The animation as he trains with the iconic weapon is particularly breathtaking.

Unlike the first short which has a slight narrative, this short is just a recreation of one of the most famous sequences in Star Wars history as Darth Vader moves through the Tantive IV eradicating anyone who gets in his way. It’s an iconic scene, and is brought to life brilliantly here. The slight running time mean that these are are great introduction to well known moments, rather than an expansion on them like Forces of Destiny.

This is easily one of the most fun of the shorts as we get to see Luke face down a very scary Wampa on the ice plains of Hoth. It’s another reimagining of a beloved moment, and this one works particularly well as the Wampa works brilliantly as an animated character. Also is that Dante Basco we hear doing the voice over??

R2-D2 is a very good droid, and this entry into Galaxy of AdventuresÂ focuses on the vital mission that sparks the original Star Wars trilogy as R2 and C3-PO smuggle an important message from Princess Leia. Some really good droid action in this one.

The closest to an original moment that we get, in this short we see Chewie and Han trying to jump start the Millennium Falcon, and luckily for both of them Chewie’s brute strength saves the day! Love that Wookiee!!

As we know the galaxy is made up of both the light side and the dark and the final of this first wave focuses on the might of the Empire! Very scary stuff!! So far these are definitely fitting the bill as a great way to introduce youngsters to the original Star Wars trilogy.