STAR WARS: FORCES OF DESTINY is Changing The Narrative - Nerdist

STAR WARS: FORCES OF DESTINY is Changing The Narrative

Star Wars: Forces of Destiny has been focused on elevating the women of the galaxy since the start. From Leia to Rose Tico, Maz Kanata to Padme, Rey to Sabine and beyond, the animated shorts have been an utter delight. As Disney releases the show’s second season, I was moved to explore the radical nature of utilizing cartoons to give space and time to women who’re often written out of some of the more important moments in galactic history, and the joy of getting to learn even more about these characters that’ve become so important to us over the years.

Though Star Wars: Forces of Destiny is ostensibly a marketing tool for Disney to sell toys to girls, that has historically led to the creation of some of the most beloved cartoons in the world. Shows like Transformers, G.I. Joe, He-Man, and Teenage Mutant Ninja Turtles were all conceived as a way of selling toys to children during an age of strict rules about advertising to children. Because of this, many of our nostalgic favorites don’t always hold up. Although Forces of Destiny fits this model, it elevates the form by creating gorgeous shorts which add to our understanding and knowledge about the women of the Star Wars universe, building on important moments in canon as they create a more inclusive vision of the galaxy we grew up with. Star Wars has, over its forty plus years, often been criticized for having very few women at the front of the multi-billion dollar franchise. Rewatch the original trilogy and it’s awfully hard to find a named female character other than the queen of our hearts, Leia. There’s Mon Mothma—who appears on screen for a whopping 28 seconds—Aunt Beru, Sy Snootles of the Max Rebo Band, and the iconic and short-lived Oola, the green dancing alien from Jabba’s palace. The prequels introduced Padme Amidala, who gave an entirely new generation of Star Wars fans a new woman to love and look up to. But like Leia before her, much of Padme’s story was defined by the men around her. In Forces of Destiny, however, both women are given their own paths, stories, and interactions—and it’s not only joyful to watch, but positively refreshing. With Rey at the center of the new Star Wars trilogy, it makes sense for Disney to build up the profiles and stories of the other women from their universe. Nearly all 26 episodes of Forces of Destiny have put women front and center in the narratives, making a truly great start for this animated series. Whether it’s showing iconic meetups we never before got to see on screen (like Maz and Leia in Season Two or Rebels’ Sabine helping out Rogue One’s Jyn in season one), Forces of Destiny has created a space for these characters to interact and get to know one another outside of the main filmic canon and it’s wonderful to watch. It’s not only incredible as a female Star Wars fan, but also as someone who adores knowing the ins and outs of things that I love; getting to see these characters from television, film, and beyond interact is an exhilarating way to learn more about Star Wars.

Though Star Wars has gotten better at focusing on women in main canon—whether it’s Rey, Leia, or Hera Syndulla in Rebels—they still often struggle to include women of color. Star Wars Rebels worked to change this by introducing two fantastic characters of color in Sabine Wren and her friend Ketsu Onyu. Sabine is a regular on Forces of Destiny, and her and Ketsu share two episodes of the animated micro-series. It’s pretty radical and unexpected to see Star Wars: Forces of Destiny giving women of color space to share a friendship and adventures, something the show will hopefully do more of going forward. 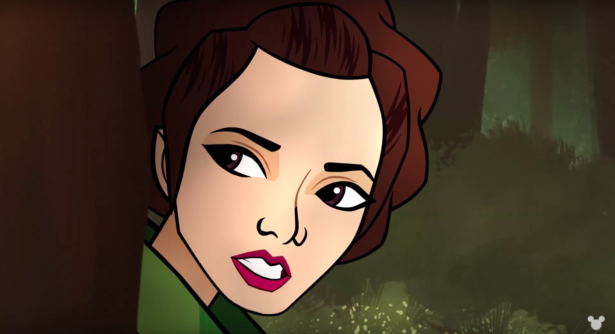 And it’s not just Forces Of Destiny, as Claudia Gray introduced us to the incredible and conflicted Ciena Ree, a burgeoning pilot in the Empire, in her fantastic novel Lost Stars. It’s amazing to see Star Wars attempting to tell more diverse stories; I just hope we’ll start to see that reflected on the big screen soon.

The best thing about Forces of Destiny is the work it does to normalize women in the Star Wars universe. It’s making every little girl who watches believe she can be a pilot, rebel, or princess all whilst expanding on the fantastic women who’ve been at the heart of Star Wars over the years. During season two we see Leia team up with Maz Kanata to disarm Boushh the bounty hunter, whose armor Leia wears during her rescue of Han in Return of the Jedi. It’s a fantastic example of the power of Forces of Destiny–it builds on an iconic moment whilst cementing agency and camaraderie between two strong women in the Star Wars universe, and it’s really quite magical.

What do you think about Forces of Destiny? Let us know in the comments below!

More from the galaxy far, far away!