It’s been six years since Disney bought Lucasfilm, and it’s safe to say that the world has since returned to peak Star WarsÂ saturation. Whether it’s the brilliant animated shows, the new trilogy films, or the spin-off Star Wars Stories, there has been a whole lot of Star Wars to go around sine 2012. SinceÂ large parts of the films are shot at the iconic Pinewood Studios, fans in the UK have often been treated to exciting behind-the-scenes news and random Star Wars fun as a bonus. But hundreds of miles away in Devon a mysterious AT-ST has appeared in a field by one of the areas busiest roads, and no one knows where it came from! 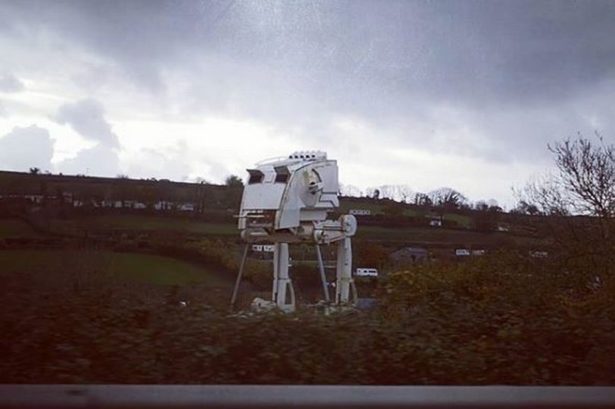 According to DevonLive news, the iconic Scout Walker has been sitting on the side of the road for a few weeks but no one has claimed responsibility or explained where in the galaxy they got the 15-foot-tall prop. You might recognize theÂ All-Terrain Scout Transport from their first appearance on Hoth in The Empire Strikes Back, or being destroyed by cutie Ewoks in Return of the Jedi. If you’re a fan of the new trilogy then you might remember BB-8Â taking charge of a First Order one and saving the day in The Last Jedi!

Who knows where the mysterious chicken walker came from, but we’re sure it’s been giving locals joy as they’ve been driving up the A38! Do you wish that you got to see this Imperial relic on your daily commute? Let us know below!