Star Trek Cats Boldly Meows Where No Cat Has Meowed Before

Artists often take to drawing their favorite characters to flex their talents and show their love for their fandom at the same time.  Chances are artwork from Jenny Parks has made it into our readers’ feeds. She’s most well known for reimagining sci-fi characters into their feline equivalents. If there’s one thing the internet loves more than nerdy TV and movies, it is pictures of cats. Parks has combined these two great tastes for many years but recently was able to officially collaborate with one of the biggest sci-fi franchises in the galaxy for an official book licensed by Chronicle Books: Star Trek Cats.

“I loved drawing,” said Parks. “Loved nerdy stuff, but hated drawing people. I liked drawing animals most of all, and especially tigers and cats. In my desire to draw the characters I loved, I started drawing them as cats since I felt more comfortable drawing them. So it started out as a weird, fun hobby, until I did a more “serious” version, with more realistic cats some years after I graduated from art school. I got a chance to sell a few Doctor Mew posters at a San Diego Comic Con back in 2011, and it did really well, so everyone was asking for what was next.”

Parks sold her artwork at conventions and at her website. In addition to Doctor Who, she’s created pictures of characters from Star Wars, Avengers, Supernatural and the Strange Fur Things poster that burned up social media feeds over the summer due to the popularity of the show. Her booth has appeared at C2E2, WonderCon, San Diego Comic Con and several other conventions throughout the US. A fateful appearance at San Diego Comic Con allowed her to connect with CBS and propose an official book of cat art. 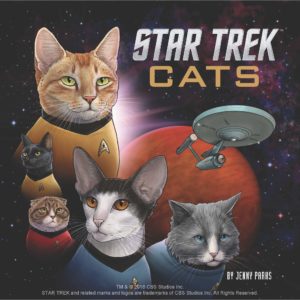 “It was actually the awesome folks at Chronicle Books who approached me during one year at San Diego Comic Con” said Parks. “They knew they wanted to do something with cats, but it took a little bit of deliberation to decide on Star Trek, which just seemed like a perfect match once we really started to think about it. From there they went to CBS with the proposal, and I heard that all of the licensing people there loved the idea.”

Star Trek Cats is a 64-page hardcover book that recreates classic scenes from the Original Series with cats. Scenes from episodes like “The City on the Edge of Forever” and “Mirror, Mirror” sit along more common pictures like the cats on the transporter or on the bridge.

What does Jenny Parks have in store for the future? “The best way to find out what I’m working on next is to join my Patreon,” said Parks, “where I post a lot of exclusive stuff and works in progress. The next piece I plan on working on but haven’t started yet will star the two main characters from a sci-fi show from the 90’s… I won’t say anything more than that. But I will say that fans of Star Trek Cats should keep an eye out for what’s next in Spring 2018.”

What is your favorite work of cat art? Let us know in the comments.