The age ofÂ Sony’s Universe of Marvel Characters is almost here. Venom is hitting theaters on Friday, October 5, and fans will soon be able to see Tom Hardy step into the titular role as Spider-Man‘s greatest enemy. But without Spider-Man, can Venom stand on its own and potentially lead the way for other Marvel spinoffs? The first reactions to Venom are in, and they’re kind of mixed at best. Although it is kind of hilarious Lady Gaga fans are being accused of piling on Venom to pump up A Star is Born. Today’s Nerdist News is cutting through the chatter “like a turd in the wind” to bring you the good, the bad, and the ugly responses to Venom.[brightcove video_id=”5843493210001″ brightcove_account_id=”3653334524001″ brightcove_player_id=”rJs2ZD8x”]Join guest host Amy “Symbiote Smasher” Vorpahl, as she runs down a few of the most memorable Venom reactions from social media. To kick things off on a positive note, the dynamic between Hardy’s Eddie Brock and his alien symbiote was praised for its humor. Essentially, it sounds like Venom is a one-man buddy comedy, which could be a lot of fun to see onscreen. 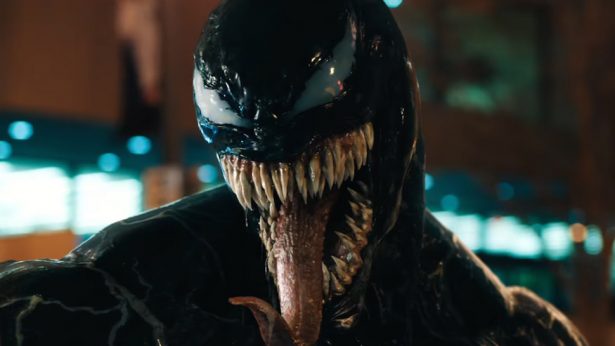 Our very own Animation Investigation host, Hector Navarro, brought along some visual aids to demonstrate the jokes that used to appear in Venom‘s solo comics. According to Navarro, the movie revisits that “weird sense of humor.”

#Venom was surprisingly funny! I had a freaking great time watching it. Despite some problems, it did right by its main character, Eddie Brock/Venom. People forget he’s always had a weird sense of humor in the comics, and that humor is fully on display in the movie! pic.twitter.com/20ufNrbGU4

However, some viewers were less than charmed by the comedy or the movie itself. IGN’s Tom Jorgensen likened Venom to the less than perfect comic book films that came out over a decade ago.

Sorry to say that #Venom is pretty much a complete failure – a tonal mess that feels 15 years old, ignoring the storytelling strides that the superhero genre has made in recent years.

A few fun Venom-centric moments aside, it has nearly nothing to offer. Don’t get your hopes up.â€” Tom Horrorgensen (@Tom_Jorgensen) October 2, 2018

“Catwoman level bad?” That’s harsh, Super Bro! For the rest of us, we’ll have to reserve judgement until we get a chance to see Venom for ourselves.What do you think about the initial responses to Venom? Let’s discuss in the comment section below!