Each week here at Geek & Sundry we’re taking a look at new and upcoming exciting titles on Kickstarter! This week’s Kickstarter of the week is Sparkle*Kitty Nights, which has currently funded to over $30,000 as of this writing.

When Sparkle*Kitty first appeared on the shelves last year it was an instant hit. The family-friendly game (and unintentional band name generator) that plays a little bit like Uno mixed with Epic Spell Wars of The Battle Wizards: Duel at Mt. Skullzfyre was so well received that an expansion was imminent. But what started out as a game to play with kids, which even included a penalty for swearing, turned out to be popular with adults as well. So when it came time to make something new, Breaking Games decided to bring a little innuendo to the party with Sparkle*Kitty Nights, now on Kickstarter. 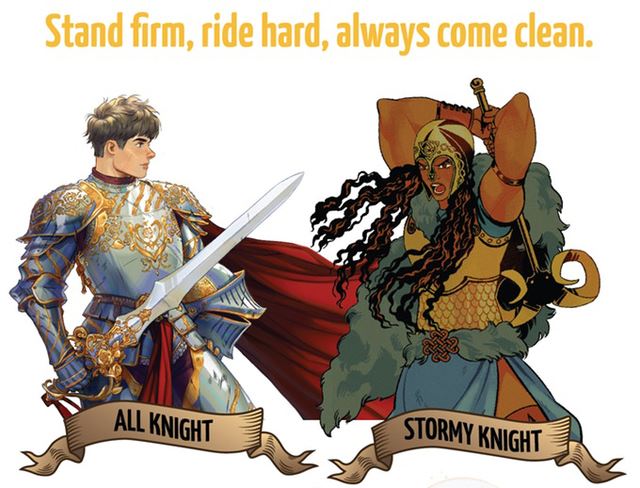 First off, if you haven’t played Sparkle*Kitty, it’s an excellent party game that you can learn in less than five minutes (in fact, you can watch Becca teach you in four). Basically, a bunch of princesses have been locked in a tower by the evil Sparkle*Kitty and need to escape, which they do by casting a series of spells from their Spell Book. Each card they play must match the color or symbol of the card before it (ala Uno) and will then be said aloud (ala Epic Spell Wars yada yada yada), leading to silly combinations like “Tickle Vortex.”

When you run out of cards, one of the cards that make up the tower you are in is removed. Remove all of the tower cards and you free yourself from Sparkle*Kitty’s evil clutches. There are a few wild cards, abilities, and penalties to go along with it, but that’s where we’re starting off. The real draw of this game isn’t just in escaping, but in trying to say things like “Twinkle ‘Splosion” with a straight face. 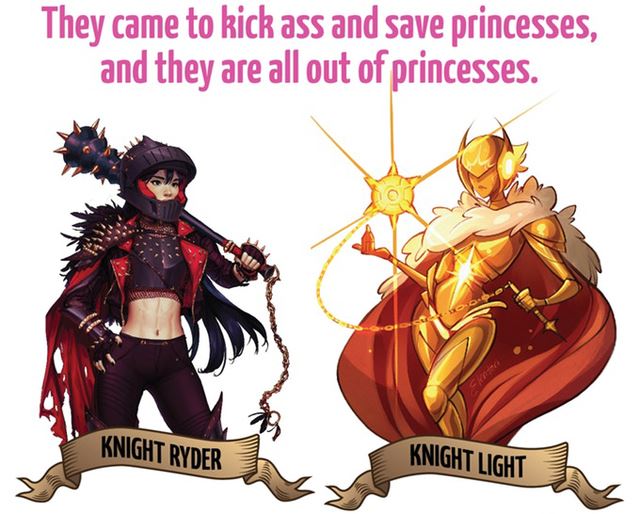 Sparkle*Kitty Nights, which acts as a standalone expansion, doesn’t change the gameplay that much, but there are a few key differences. In this game, each player is a Knight, come to save the princess. Of course, as we all know, those princesses were strong, independent women and didn’t need saving. Unfortunately for the Knights, this means that they’re getting locked up instead, and will need to fit something into the Key Hole in order to escape. As you might have guessed, the spell cards from the original have been replaced with slightly more adult-themed words to use.

Fueling your dirty minds isn’t the only thing that Nights brings with it though. Now each player will be secretly assigned to a team, Naughty or Nice. When you escape your tower you’ll expose your card, but you’ll only win if your whole team escapes. And if you’re playing with an odd number, one player will secretly be the Dragon, acting like Knights until they choose to expose themselves, after which they get to play against everyone.

Nights has also added a flock of artists to design these beautiful new Knights. The artist for the original game, Leah Artwick, is joined by Manda Schank, Sara Kipin, Elentori, and Sandara Tang. Besides designating your team, the Knight cards don’t bestow any special powers, but seeing which Knights people identify with is part of the fun. (For the record, I’m Last Knight all the way). 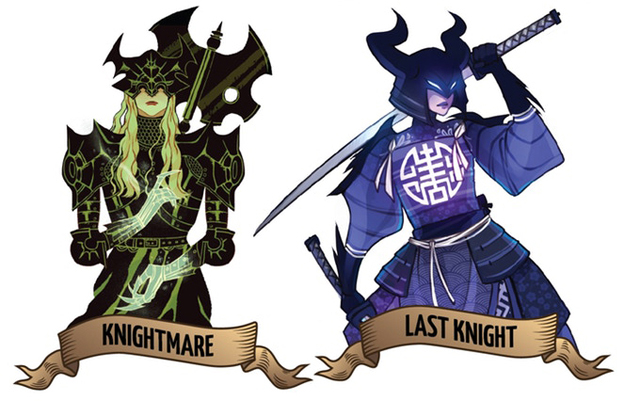 Nights reached its funding goal in less than two hours and has its sights set on some great stretch goals like new words, new Knights, and higher quality components. They’ve also made the website Dragon Finger, which lets you suggest words to be added to the game. And if you already have Sparkle*Kitty, then Nights can easily be mixed in with the base game. If you feel like joining in on the debauchery, the Kickstarter ends on May 31st.

What’s your best Sparkle*Kitty spell combo? Let us know in the comments below!

As well as writing for Geek and Sundry, Shea teaches board games on his YouTube channel RTFM. You can also talk to/follow/stalk him on Twitter @Sheasayswords