Someone Turned Moby Dick Into A Dungeon Crawl - Nerdist

Someone Turned Moby Dick Into A Dungeon Crawl

“It is not down on any map; true places never are.” -Herman Melville, Moby Dick

RPG genius Gareth Ryder-Hanrahan has taken Herman Melville’s classic tale of Ahab and the whale, and re-imagined it as a dungeon crawl. In a massive campaign entitled Eyes of the Stone Thief, you and your hardy crew of adventurers must take down the beast.

How is it possible for a tale of man versus animal to evolve into a dungeon crawl, you ask?

In 13th Age, a D20 fantasy role-playing game from Pelgrane Press, dungeons are not lost and abandoned castles, mines, or crypts. Rather, they are living things that can swim through the earth like a whale through the ocean(!).  Ryder-Hanrahan describes them as

chaotic spasms of hate-filled architecture that swim up from the depths and erupt on to the surface, their corridors and chambers spreading out like a cancer beneath the ground. 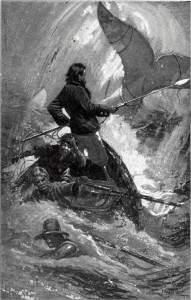 During character creation for the campaign, players should come up for a reason to want revenge on this dungeon. Perhaps it swallowed a character’s home village, or crushed their favorite uncle. During the campaign, the dungeon is no passive foe. After it is attacked by the characters, it will go after their families, their homes, and the ones they love.

Vengence-obsessed characters pursuing a nigh-unbeatable foe is indeed an apt analog for Moby Dick, but it is worth pointing out the raw creativity displayed by Ryder-Hanrahan in thinking to equate the living dungeon with Melville’s white whale. Great game designers, like great writers, can take something old, and make it new again. With Eyes of the Stone Thief, Ryder-Hanrahan has created a commentary on Moby Dick in game form, while simultaneously birthing a dungeon unlike anything you’ve seen before, despite the fact that gaming greats have been making awesome dungeons since bell bottoms were cool.

We here at Geek & Sundry cornered Gareth Ryder-Hanrahan at Gen Con, the largest tabletop gaming convention in the world, to ask him where he got such a whiz-bang idea. He replied, “I didn’t fall down and hit my head on a whale or anything. I don’t know where the synapses fired exactly.” Like so many creatives, the origin of his ideas remains a mystery.

The final question, is whether or not the fate of player characters in Eyes of the Stone Thief will match that of the Pequod‘s crew. Will anyone at all escape the dungeon to tell the tale? There’s only one way to find out.

What other classic tales do you think should get the RPG treatment? Let us know in the comments below.