For $400, you can pick up the new Playstation VR this October. Or, 44 pounds of Jelly Bellies.

However, you could throw that fat stack at Adam Poots for his independently released Kingdom Death: Monster. This huge beast needs its own shelf, comes chocked full with dozens of hobby quality miniatures, and houses nearly a thousand cards. Just as Cypress Hill accused—insane in the membrane.

This is exactly the type of project that doesn’t happen without Kickstarter. Adam was making resin miniatures for his Kingdom Death dark fantasy world when he took a chance on a big box board game and raised a cool two million. The idea was to switch his terrific and horrifying sculpts to the plastic medium and put together a $100 MSRP game on par with a Fantasy Flight Games or CoolMiniOrNot big box offering. The whole project ballooned to fit his vision and the miniatures evolved to achieve the desired quality. It was the first enormous game to garner such huge swathes of greenbacks via crowd funding and opened the door for many to follow.

And damn, what an excellent usher this is. The setting is a cold alien realm of constant black where frail survivors walk across a ground of stone faces. The elements are harsh and the monstrous entities hunting in the void will swallow you whole. The tone and game-play most closely resemble a strong mix of the popular Dark Souls and Monster Hunter video game franchises. If that doesn’t get your loins tingling then I don’t know what will. 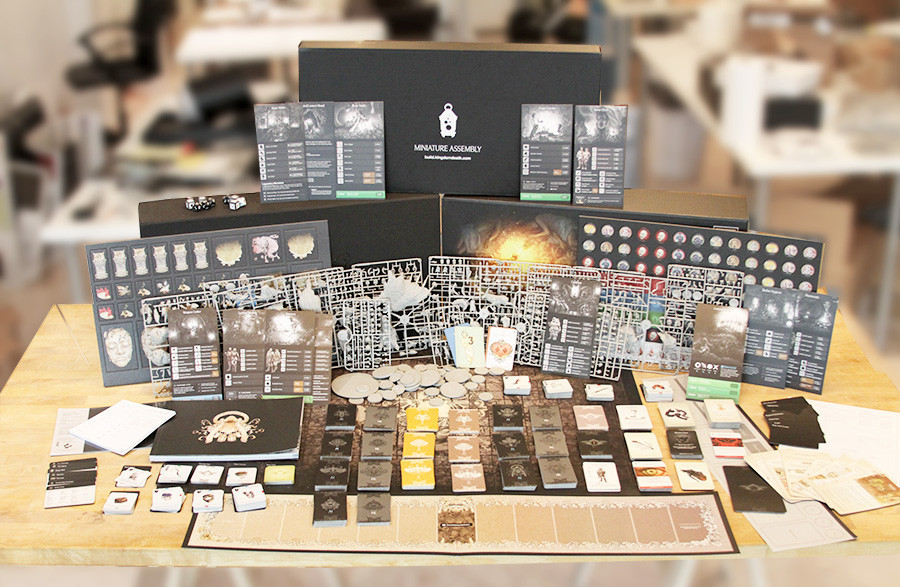 After you spend the requisite days assembling the highly detailed figures and sorting that Himalayan-sized mound of cards, you can embark on the nightmare. Players cooperate to hunt down feral beasts with twisted visages and hopefully survive without losing more than a single arm or eye. If you achieve glory and fell your prey, you are rewarded with “resources” of its fur, limbs, and bone that you will haul back to your settlement and utilize to craft unique gear and equipment. This takes place over an extended campaign that can last up to 25 sessions of grim masochism.

This tempo of hunting down a creature, engaging in a huge boss-style fight, and then utilizing bits of its carcass to build up your settlement and weapon stores is the heart of the game. It’s a cyclical lifestyle with harsh jagged claws tearing at your flesh while you try to run the gauntlet. Story events trigger during the settlement phase and sometimes you will lose half of your population to plague. Other times, you’ll spend a precious Endeavor (a metaphysical resource earned from succeeding on a hunt) to attempt to trigger Intimacy only to lose two of your characters in child birth. Occasionally a Nemesis will show up and fillet four of your people just so that it can wear their skin. Presumably for fun, but I’m not sure the Butcher is physically capable of experiencing fun.

A game that’s predicated roughly half of its experience epic showdowns and the other half being quirky civilization builder has already positioned itself in a weird niche that offers something wholly unique. It would fail to reach its potential if both portions weren’t so damn satisfying. 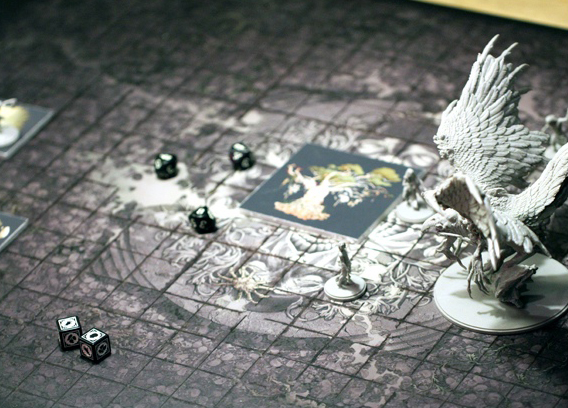 The culmination of the hunt and confronting a Screaming Antelope with a huge gaping maw where its belly should be is nothing short of exhilarating. Enemies utilize a unique AI deck that changes with each confrontation, so you may have a general idea of what a White Lion is capable of but you don’t know exactly what cards will show up. Sometimes the twisted thing will resort to Ground Fighting and play possum while others it will continually bite at your noggin.

When you put in the work and finally get some lucky dice rolls to tear the horror apart, you’re showered with an eyeball, clumps of fur, and a hoof. Then you go back to your cheery town of death and depravity and finally put together the elements needed to make that final piece of Rawhide armor or that shiny new Katar you’ve been yearning for. This combination of momentous action that explodes with a piñata of squishy organ currency is addictive.

A narrative campaign game with such a unique world as this lives and dies on the longevity and creativity of its content. Similar in spirit to the adventure game genre, you need to feel a living and breathing ecosystem that keeps surprising you. If you start to reach the end of the line and things become stale as you bump up against the narrative edge, the game loses its magic.

Kingdom Death: Monster has a longevity and expansive environment like no game I’ve ever seen. Perhaps due to the ridiculous amount of events and encounters, or maybe through some dark sacrificial magic, Adam has crafted a world that seems limitless. You don’t hit that invisible wall or start to see cracks. Everything is interwoven masterfully and atmosphere hits you like the warm breath of a Gorm.

This game is the table top equivalent of going to Disney World–it’s an experience that you’ll never forget. But, is it worth $400? Well, are you insane in the brain?

What’s the most you’d ever spend on a table top game? Do you think people are crazy for even considering a boutique game like Kingdom Death: Monster? Let us know in the comments below!