Based on the 2002 novel Altered Carbon, the self-proclaimed neo-noir cyberpunk series is expanding into a tabletop roleplaying game. The Netflix show just launched its second season. Combining a healthy mix of Blade Runner, Total Recall, and Transhumanism—the setting rocks as an RPG. Apparently, the Kickstarter did too, raising over 1000% of their funding goal and hitting over 3,900 backers by the end of its run. Hunters Entertainment (Outbreak: Undead) headed up the design with an amazing team of people, so it’s no surprise that this Kickstarter slew expectations.

The Kickstarter page contains the vital information any prospective player could need. We still wanted to take a moment to highlight some things that are… unique to a world in which you can’t “die”. Imagine the prospects for a moment. Villains can be “killed” only to return later, potentially wearing the face of the party’s friends. A full TPK can happen, and the adventure continues with the consequences of that folly. Or bar fights suddenly become far more bone-breaking. Not only does this concept present interesting ideas for storytelling but Altered Carbon RPG is also flipping our dice on us.

Using the Hazard system, the game encourages you to roll natural 1’s. Which is frankly, glorious blasphemy. I think this gameplay difference is important to differentiate the setting and game for long term roleplaying game players. If you’ve been rolling D20’s for a while, changing the dice mechanics on your table does work as a tangible reminder of the new world.

For as long as I’ve been a storyteller; I’ve often been running Cyberpunk, Transhumanism, or modern settings as long-term campaigns. I love high-tension, cheeky, dystopian conspiracy games so naturally Altered Carbon stole my interest. But every group needs one person to take up the mantle of Gamemaster. Let’s take a look at how two major aspects of storytelling in a Transhuman or Cyberpunk setting in order to inspire other storytellers!

Immortality For All! (If You Are Rich) 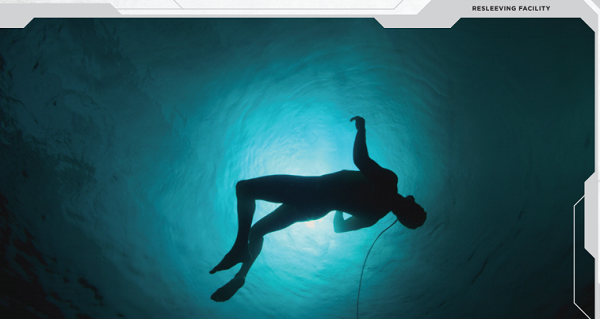 In this transhumanist world, the human mind is  “Digital Human Freight”. Stored in a small, diamond-hard device at the base of the skull, everyone calls a cortical stack it. Some people have their brains sliced and scanned in layer-by-layer while others take a more digital approach. The end result is the same: you can “re-sleeve” your entire consciousness into a new body. With remote digital back-ups, needle casting your mind to other planets, or having a variety of custom bodies on hand—you can become an immortal god. The ability to change bodies or sculpt your frame like an automobile is a dream for many.

So how do you storytell for nigh-immortal body-swapping player characters?

Permanent death is possible for anyone whose stack is destroyed, but namely, you focus on an uplifting style of storytelling. Re: The characters’ backstories. Create elaborate backstories with wonderfully fleshed-out characters with full narratives by spending time with your players. The concept of a session zero is infinitely more important in settings like AC. Once created, weave those delicious backstories together into one yarn-ball of a plot. Since characters can be hundreds of years old, it’s okay to hop a few decades. Long-term gameplay in a transhumanist setting isn’t going to be about TPK’s, rather, about the parties’ choices around that ball of yarn. Some threads will get tugged, others will get knotted, and at least one will be hacked with a chainsaw. Meanwhile, villains at the beginning of the game can become allies later on. Only to swap sides again later. Embrace this fluidity as a storyteller.

“Playing in a Dystopian Neo-Noir world like Altered Carbon is fascinating because a ‘sleeve death’ becomes a story point in a way feels incredibly different than other RPGs. Rather than just crunch a bunch of diamond dust and go on ‘business as usual’ that player now has the ability to ‘spin up’ in a new sleeve (be it beg, borrowed, or stolen – rarely purchased) and go out and investigate why. Also, considering the divide between ‘have’ and ‘have nots’ in Altered Carbon is so extreme – it creates a sociopolitical background that really creates stakes in unique ways. Who did you have to borrow from in order to get that sweet sleeve upgrade that allows you to punch through concrete? The Russians? What’ll happen if/when that sleeve gets damaged? Who’s gonna pay for it?” -Ivan B. Van Norman.

Since the characters and NPC’s will remain under the campaign spotlight for a long time, time invested into them is well spent. This also opens several new tactical options for both sides of that storyteller screen. For example, if the party knows they will resleeve they might consider one-way-ticket missions with no extraction. Nothing says a salty faction can’t strike at the party’s prized bar in the same way.

Cyberpunk worlds are both storytelling gold and a daunting task of finding where to start. Altered Carbon gives us a major campaign focal point called Bay City. Focused into three, easy to identify, and easy to dabble in factions: The Ground, the Twilight, and the Aerium. Poor, middle, and methuselah godlike rich respectively. Narrowing down a multi-planet cyberpunk setting to former San Francisco is exactly what gamemasters need to focus on a campaign. I couldn’t be happier with the QuickStart guide for doing exactly that, and I really want to give a special shout out to the designers for making that call.

To prevent getting lost, shine a spotlight on local beats. Basically, in a setting with billions of people teeming on top of each other location bloat can be a major design problem. It’s easy to fall into the pit of infinite information, and your players suffer from the noise. Cities are nearly infinite in story, filled with vast sprawling segments, and can make the PC’s feel tiny. Unlike fantasy campaigns, the pulse of an urban fantasy or cyberpunk campaign beats inherently different. Less territory control or nation wars, and more investigation and fights contained just out of sight.

Keeping everything setting wise sorted into factions or companies creates instant bonding with players. The Meths and the Grounders are easy factions to grasp onto and weave into a story. For added flair, toss in some company products and branding on your player characters weapons and you’ve seeded your immersion. Instead of having named NPC’s, simply use faction representatives. If a pair or duo of them keeps recurring, feel free to start fleshing them out a little more. By keeping motives and goals orientated around the faction or company, you can brand it, and use that branding in the world. Plus your party will naturally start to separate the employees, from the company. Pelican Corp is an evil weapons manufacturer, but Debbie in shipping is a heckin’ saint.

Have you tried the Altered Carbon RPG yet? Try the Quickstart Guide here and let us know your adventure in the comments!