There are obviously a lot of people out there that own various game consoles, if only to get different experiences out of each one. But how many go the extra mile to own special collector’s editions of these consoles?

And this goes deeper than the special edition Xbox One consoles (like Halo 5: Guardians and Forza Motorsport 6) or the Star Wars-mapped PlayStation 4 console that are available. Some folks have gone as far as building their own game console, custom-built from the ground up to add to their collection or sell online. While these are pretty rare machines in their own right – some are even one of a kind – they’re remarkable in their design, while at the same time maintaining the same level of performance you’d find in a regular machine.

We’ve scoured the Internet to find seven of these standout custom consoles, to show you just what kind of savvy some of these folks have when it come to design. And, yes, you’d be lucky to add them to your collection. 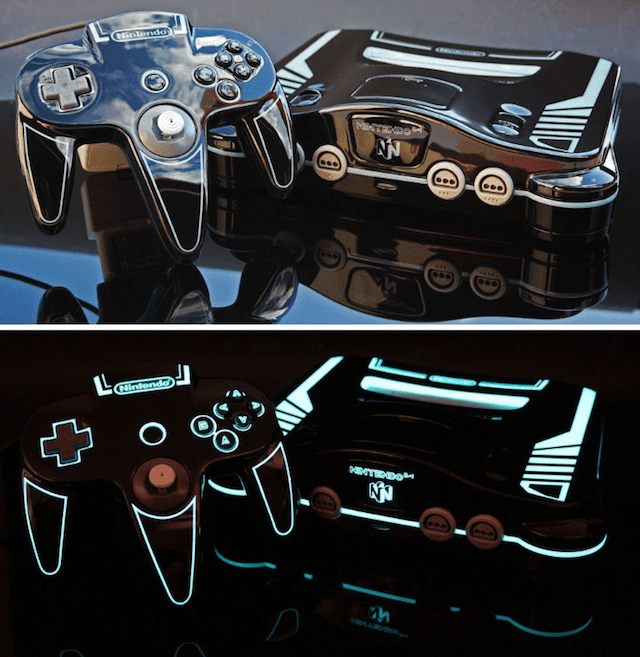 There are a number of colors available for Nintendo 64 units, but how many glow in the dark like Zoki64’s design? The answer: none. This slick matted console not only looks great with its blue and black design, but it also glows in the dark with neon colors straight out of the Tron films. You won’t find this on sale anywhere (it was made for a private collector’s N64 collection), but that won’t stop us from dreaming. 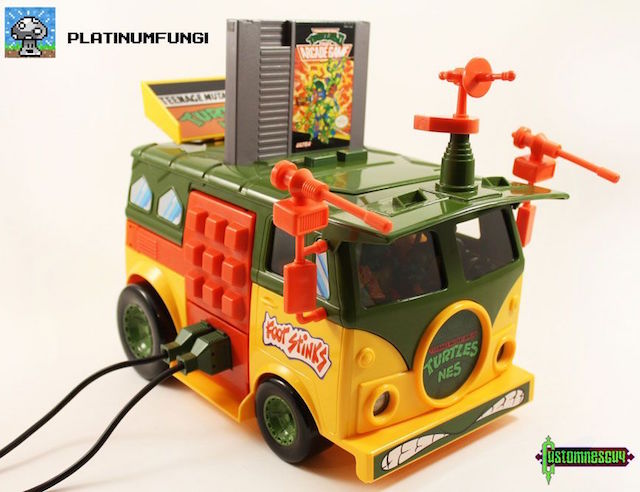 Cowabunga! This custom-built system, created by Platinum Fungi and painted by Custom NES Guy (another specialist in the building game) resembles the party van from the classic Ninja Turtles cartoon series, with cartridges fitting in on top. The system also features a classy plug-in system on the back (so they don’t stand out – it looks like it goes right into a gas tank) and two custom-painted controller. We’d totally play Teenage Mutant Ninja Turtles II: The Arcade Game on this. 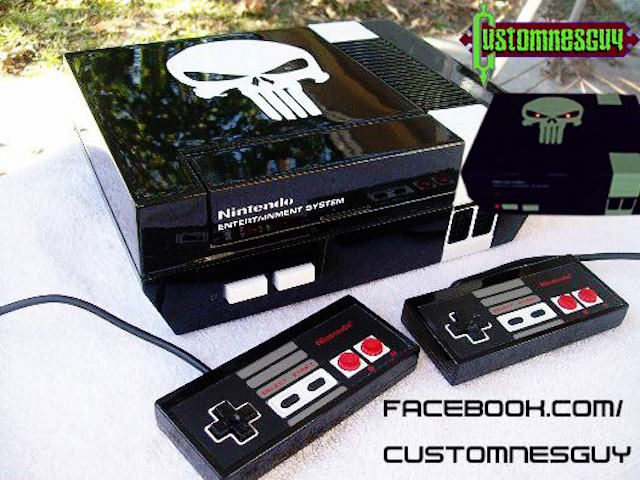 Speaking of Custom NES Guy, he works on a number of system creations of his own, some of which are lucky enough to be sold on eBay. Among his selections include favorites based on old-school games, but this particular model, featuring Marvel’s gun-toting Punisher character, resembles something every comic book fan would love. Whether it’s the solid black matte design (with Punisher logo) or the way that the eyes light up on the top of the system when it’s on, the design will make any gaming or comic book fan jealous. If only one of these would go on sale… 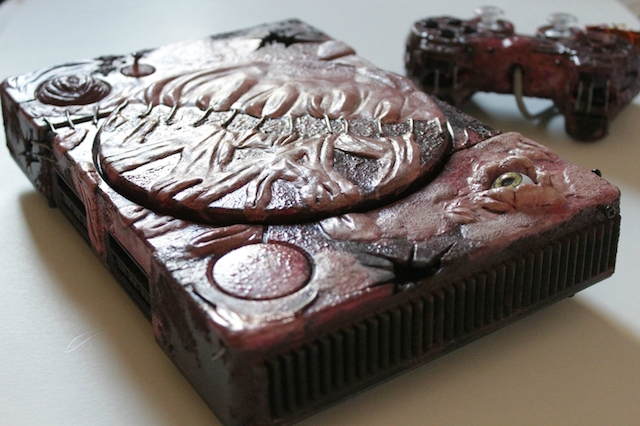 Those of you who love the Evil Dead films or series, or are just in the mood for a good horror-based system, will love what artist Vadu Amka has done with a Sony PlayStation. This thing looks like it crawled out of hell, with a console and a controller mapped in what resembles human skin, and with a few extra creepy effects like the eyeball peering out atop the system. What better way is there to play classics like Silent Hill and Resident Evil than on a console that’s always watching you? 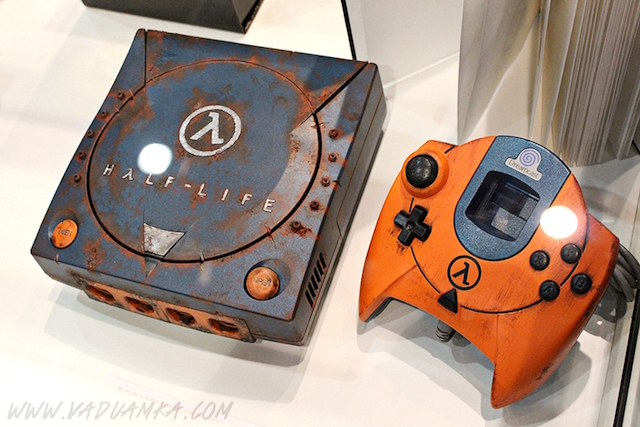 Another amazing design from Vadu Amka, this Dreamcast is one of the best designs we’ve seen, as it pays loving tribute to Valve’s Half-Life series. The shocking thing is Vadu only took a month and a half to finish up the design and it looks like a professional quality model. Whoever ended up with this is no doubt very lucky – or managed to steal it with the help of a crowbar. 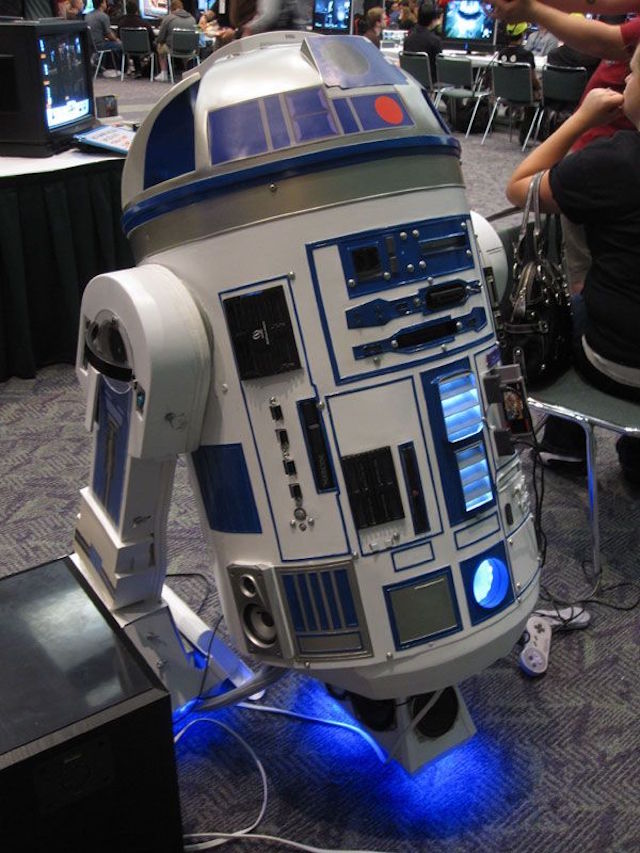 There are various custom consoles out there based on R2-D2 units, including PlayStation 3 and Xbox 360. This creator, however, went all out and put ten consoles into a single operating R2 unit, including PlayStation 2, Xbox, GameCube, PlayStation, Dreamcast, Nintendo 64, Sega Saturn, SNES, NES, and even the Atari 7800. There’s even a projector installed in the head to let you play games anywhere, even in a galaxy far, far away. Now that’s multi-tasking and it looks amazing to boot.

Which classic console do you want to see get a makeover? How would you customize it? Let us know in the comment section below!