GM Tips Our series to help Storytellers and Game Masters improve their craft and create memorable roleplaying experiences. Last week, we talked about the plague of favoritism and how to avoid it, this week we shift gears entirely to discuss running games out of a single location.

Your typical campaign reads like something from Middle Earth, bounding across field, forest, and mountain to engage in noble quests. Players enjoy the variety of environments and storytellers avoid fatigue by revealing hidden truths in new locales. Despite the benefits of running campaigns over vast landscapes, there are some compelling reasons to run games in single locales as well.

Perhaps you are running an Eclipse Phase game and the entire group is locked on a space station orbiting Titan. World of Darkness games often are based upon a single city as a location, and many roleplayers have played in Waterdeep as a main city campaign. But how do you add longevity to those campaigns or build vibrant locations from scratch? I love city-based or confined space games more than others because I tend to run conspiracy based games. When you increase the complexity of your storyline, you need to cut back on the revolving door of fresh NPCs players always see. Here are some other ways to spice up your single location games.

Get Dirty With Infrastructure

Perhaps because I’m an electrician by day, I always notice the piping in any building I walk into. Who installed it? How did it get there? What were they paid? These questions applied to any setting add significant depth to a location. Everyone knows the mayor, or the dominant faith in a region or perhaps even the cities main export—but I’ve not seen enough games where trash removal was given any thought. Let’s not even get started on plumbing and other waste disposal logistics.

Pay attention to the oft-forgotten systems of civics that are obfuscated from our daily thought process. In sci-fi or space exploration games, it’s a trope to use a labor uprising due to poor working conditions, so avoid that. Instead, try your hand at young people being trained on systems, or the political clout of various trades. What happens when in the city of Waterdeep when stonemasons end up killed or roof thatchers all get a mysterious plague?

When something is taken for granted, and then it’s removed, a story is going to unfold. 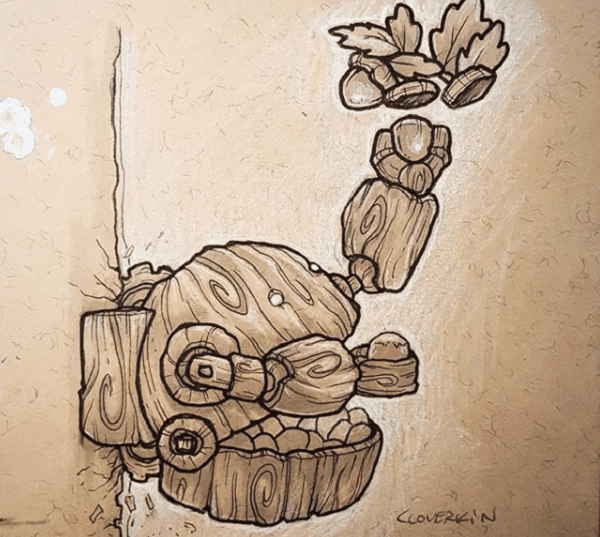 When you stay in static locations, at first glance, you lose the ability to explore a monsters manual or move through an entire rogues gallery. Rather than restrict yourself to humanoid criminal organizations and politics, with a little elbow grease, every monster can be worked into a campaign.

In fantasy settings; you may create a more cosmopolitan city and have non-human races living and working alongside their humanoid counterparts. Another option is to take monsters and have them perform various tasks tied with infrastructure—like Rust Monsters working as part of construction crews, or Bullet’s being involved with sewer operations. Toss in some magical rings of command and you can create entire economies. The little robot pictured above, designed by Ashley Erickson at Cloverkin, screws the bottoms of acorns to the acorn’s top and and is a whimsical, cute, construct.

In sci-fi or futuristic settings, alien creatures naturally fall into place as lab experiments or visitors with hostile intentions. You’ve also got the liberty and freedom to engage in cloning, or artificial intelligence gone awry, or nanomachines that start eating everything. We aren’t limited to rehashing old Stargate SG1 plotlines either—sometimes evil is just, well, evil. Adding a wraith, or a banshee into a cramped space station can turn your campaign from a standard future game into a rehash of Event Horizon or Dead Space.

Use Seasons To Show Growth 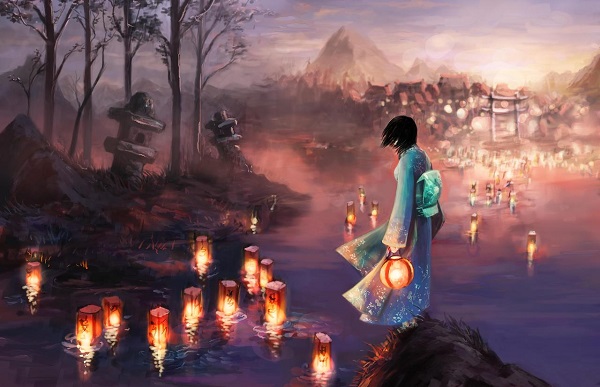 I love festivals and cultures. Legend of the Five Rings once had supplements out there that detailed the calendar year of Rokugan and how each clan celebrated various festivals. Take advantage of the culture in your setting location and build a calendar out with holidays. It’s not like you’ll have to build another for a different area. Festivals allow special events to happen and storylines to unfold without you having to change locations, but if possible, always have seasons in your game with four quarterly events (even if it’s just four different temperatures of hot).

Each season you’ll want to have a larger event where your prominent NPC’s showcase their growth. Unlike a traveling game, your NPC’s simply must evolve as the setting changes. Teenagers should be trying out to join the military and perhaps failing, bartenders should find love, other characters should die of sickness or old age even. Festivals are a way to showcase NPC growth without having to put brainpower into it every day. When your characters attend the festival and they ask where Jeff the Innkeeper is, that’s the perfect time to point out that Jeff got Dysentery and died, and the inn is closing down because of an abnormal number of bar-fights. Then next season, if the characters changed that situation (in my case, the inn is now burned down completely), they will be able to see the growth and consequences of their actions!

What’s your favorite campaign that took place in a single location? Let us know in the comments below!

Image Credits: Ashley Erickson at Cloverkin and Festival of Drifting Souls by AEG