Shut Up & Sit Down, one of the funniest and most charming tabletop game review sites, is teaming up with Monikers to create an expansion for the hilarious party game. The Shut Up & Sit Down Nonsense Box, which doesn’t require the original game of Monikers to play, has kicked off its crowdfunding campaign.

“The Shut Up & Sit Down Nonsense Box is no less than 112 cards that were dreamed up and playtested by… us!” writes Quintin Smith in the expansion announcement. “We didn’t get the memo that the card descriptions were only supposed to be informative, so we made those really funny too. Oops.” 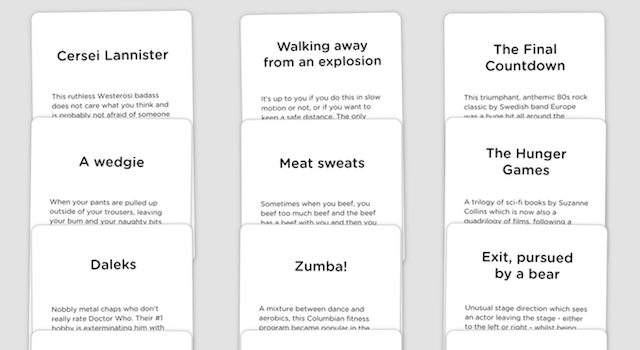 Beyond their comedy chops, which makes them perfect to write this box of goodies, the folks at SU&SD know games, having written on and reviewed many as well as consulted on games like one of our favorite board games of 2016, Mechs vs. Minions.

Monikers is a charades-type party game that removes most of the embarrassment factor by letting players first choose the cards they feel best suits their group. The game is played in three rounds that increase in difficulty, but use the same cards for those rounds. The first round uses verbal and physical clues, the second only one-word clues, and the third is charades only.

Shut Up & Sit Down’s review of the original game is so funny and so exuberant that it’s plain to see why they were the perfect choice to help create an expansion.

The Nonsense Box can be yours beginning at pledges of $10 and up. That’s 112 cards for just $10, no base game required (although you can add one on to your pledge). The project reached funding quickly, and you still have time to add your support.

Is charades the most embarrassing game ever? Tell us in the comments.

All Images: Monikers / Shut Up & Sit Down