Shing Yin Khor is the internet’s favorite crafter. Their gorgeous keepsake games constantly hit crowdfunding goals in hours. Khor’s Four Seasons Landscaping Gritty shirt raised over $150,000 for the Georgia runoff elections. And with their new book, The Legend of Auntie Po, the artist showcases their vital talent as a historical cartoonist. The powerful and beautiful graphic novel reimagines the myth of Paul Bunyan through the tale of a young girl called Mei, who along with her family works at the Sierra Nevada logging camp in 1885.

For Khor, the historical fiction was a chance to recontextualize one of their personal passions. “I’ve been fairly obsessed with Paul Bunyan history for some years,” Khor told Nerdist via email. “It really just started out as being into lumberjacks and huge roadside statues and all sorts of goofy road trip Americana. But the more I researched these stories, the more I realized that Paul Bunyan mythology actually dovetailed with a lot of my other interests, such as the history of working class Chinese people in America, and how much of the American story is shaped by clever marketing but built by the marginalized.” 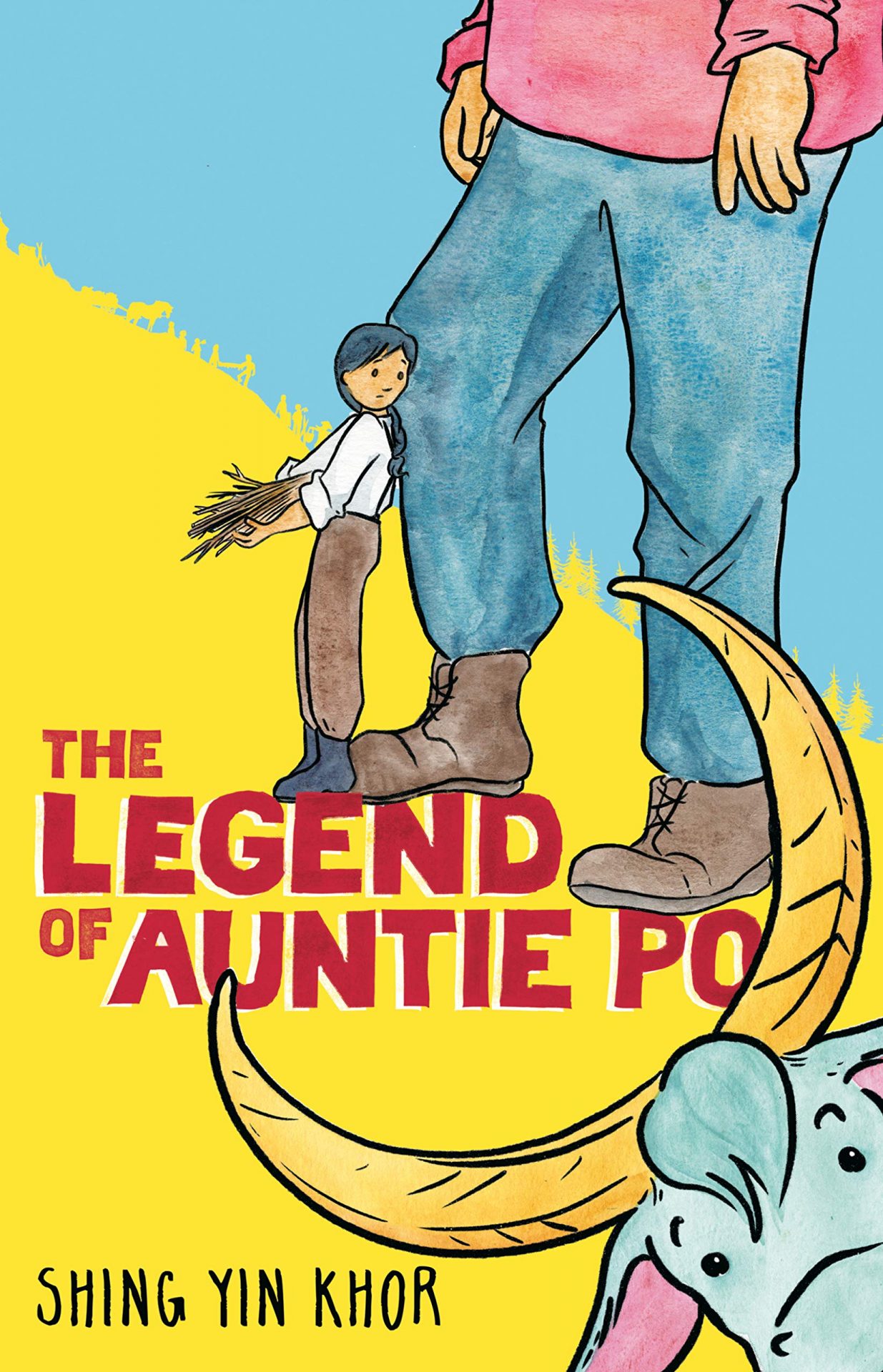 The appeal of Bunyan ties into Khor’s astute observations about Americana and mythology. “I’m really into the myth of Americana,” Khor shared. “Specifically how myths evolve away from oral traditions and become more reflective of dominant narratives because of the people who document them. A lot of the early Paul Bunyan stories acknowledge the racial and cultural diversity in logging camps at the time (even if they were racist!), in a way that has actually been whitewashed out as the Paul Bunyan legends evolved. The first academic paper on Paul Bunyan was written by a young college student, K. Bernice Stewart, and her advisor, Homer K. Watts. That paper even acknowledges Japanese cooks!”

Khor continued, “The myth of Paul Bunyan gets progressively more sanitized as he becomes a patriotic character during the World Wars, and then becomes a pretty individualistic story for children about a quaint big lumberjack in the woods. But the stories closest to the oral tradition are very deeply about the working class, even if Bunyan himself is not necessarily the hero of all these stories (there is a story where he cheats his workers out of their pay, for instance).”

The story came to the artist as they researched a “chunky non-fiction” book about Bunyan. While that’s still a passion project for the cartoonist, Auntie Po “came together really quickly.” Khor explained. “It sort of sprung into my head while I was reading a non-fiction book about Chinese logging workers ( Chinese in the Woods). I already had years of Paul Bunyan and logging camp research behind me, so many of the pieces were just waiting to be slotted in place. The final story is very similar to the pitch, which I wrote in just two days, immediately after having the idea for the book.” 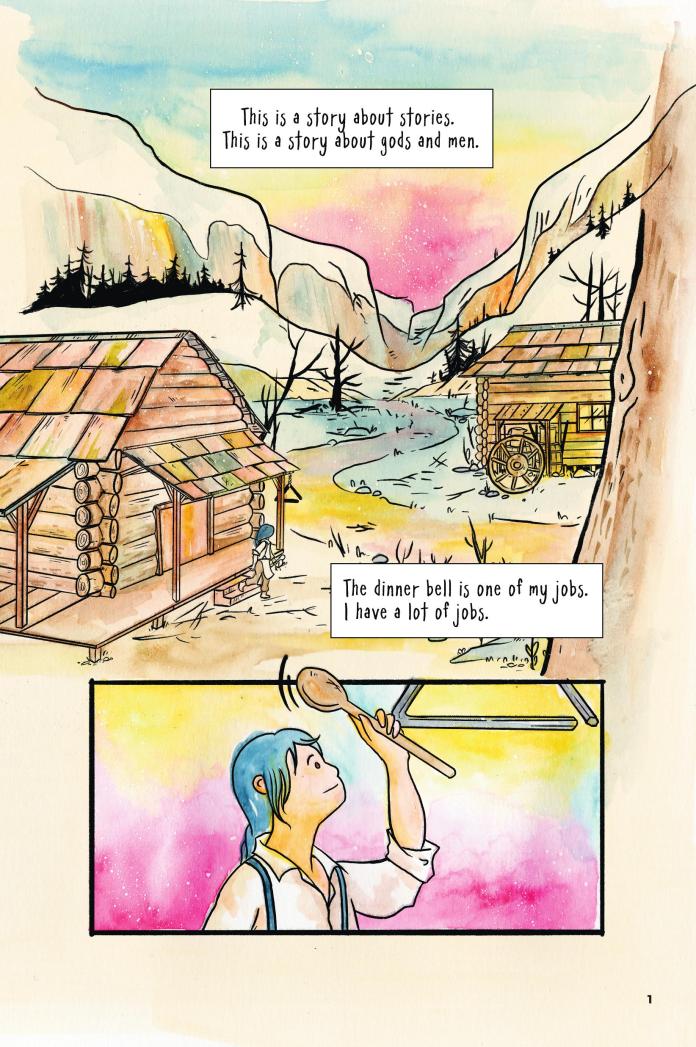 Mei is the gregarious, smart, hilarious lead, and for Khor, she was a chance for representation they’d never had. “Mei’s just a goofy kid, y’know,” Khor shared. “When I was a kid, I loved stories about bright, adventurous, funny girls, but I never saw myself in them because they didn’t look like me. Mei is an absolutely indulgent character. She has my build, she has my hair, she has my aunt’s name, she dresses how I would dress and she reacts to the world around her in the manner that feels most instinctive to me. I don’t bake pies, but I like building things and I like cooking. I don’t know if Mei is the perfect lead for my story, but I didn’t get to star in any of the stories I read about adventurous, competent girls when I was a kid, so I’m indulging myself here.”

The Legend of Auntie Po is a story about mythology, family, and race. One of the most powerful recurring themes is that of the realities of allyship. “Almost everyone in this book has good intentions, and wants to be an ally, but intentions are not enough. You can be both well-intentioned and harmful, and intention does not forgive effect. There are many intersections of privilege and even Mei does not understand all of them. Martha, who is a Black woman, is extremely cautious (for good reason!) when Mei tries to make her son feel safe, because she does not feel comfortable making that promise to her children.” 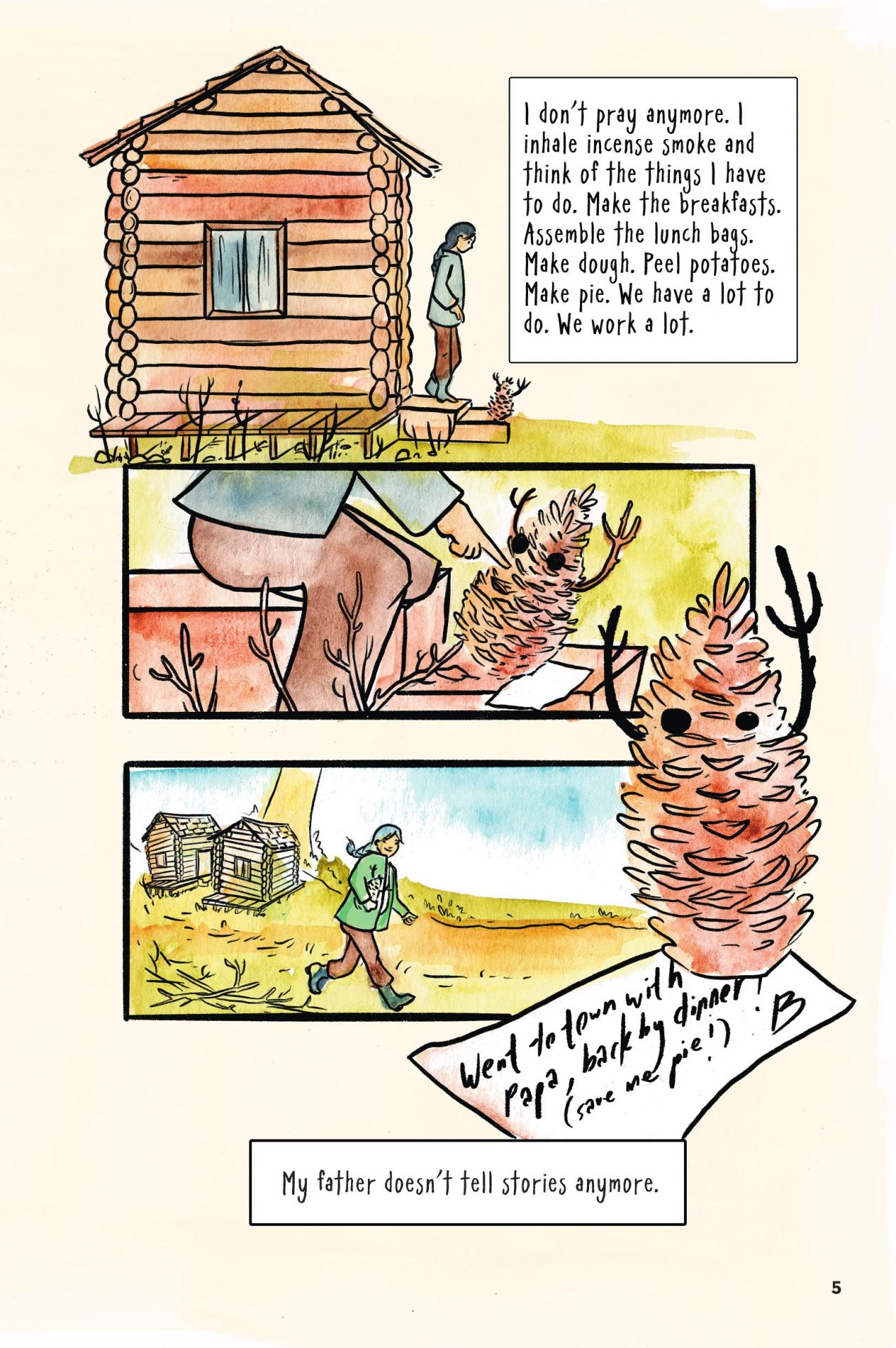 They continued, “In a sense, Mei does live in a reasonably sheltered and privileged environment that her dad has tried to build for her out of the privilege of white proximity by leveraging his white friendships. A lot of the experience of being a non-white person in America is about trying to navigate whiteness. This book is very much a book about both Mei and her dad beginning to understand that catering to that is not sustainable, and that they do have to find more community that isn’t solely defined or controlled by whiteness.”

Like all of Khor’s work The Legend of Auntie Po is a beautiful piece of craftsmanship. But it was a new process for the artist who “switched from a completely traditional hand-drawn style to adopting some technology” as they began the book. It was a choice that greatly expedited the creative process! “I am very grateful for how much faster my iPad made it. I think I might have spent five years drawing this otherwise. I did everything from the thumbnail to the pencils parts of the process digitally in Procreate on the iPad. I feel like I am a very functional artist; it’s not a book with a lot of artistic flourishes, but you can still tell I got indulgent with the things I like, like charts and maps and two page spreads of nighttime.” 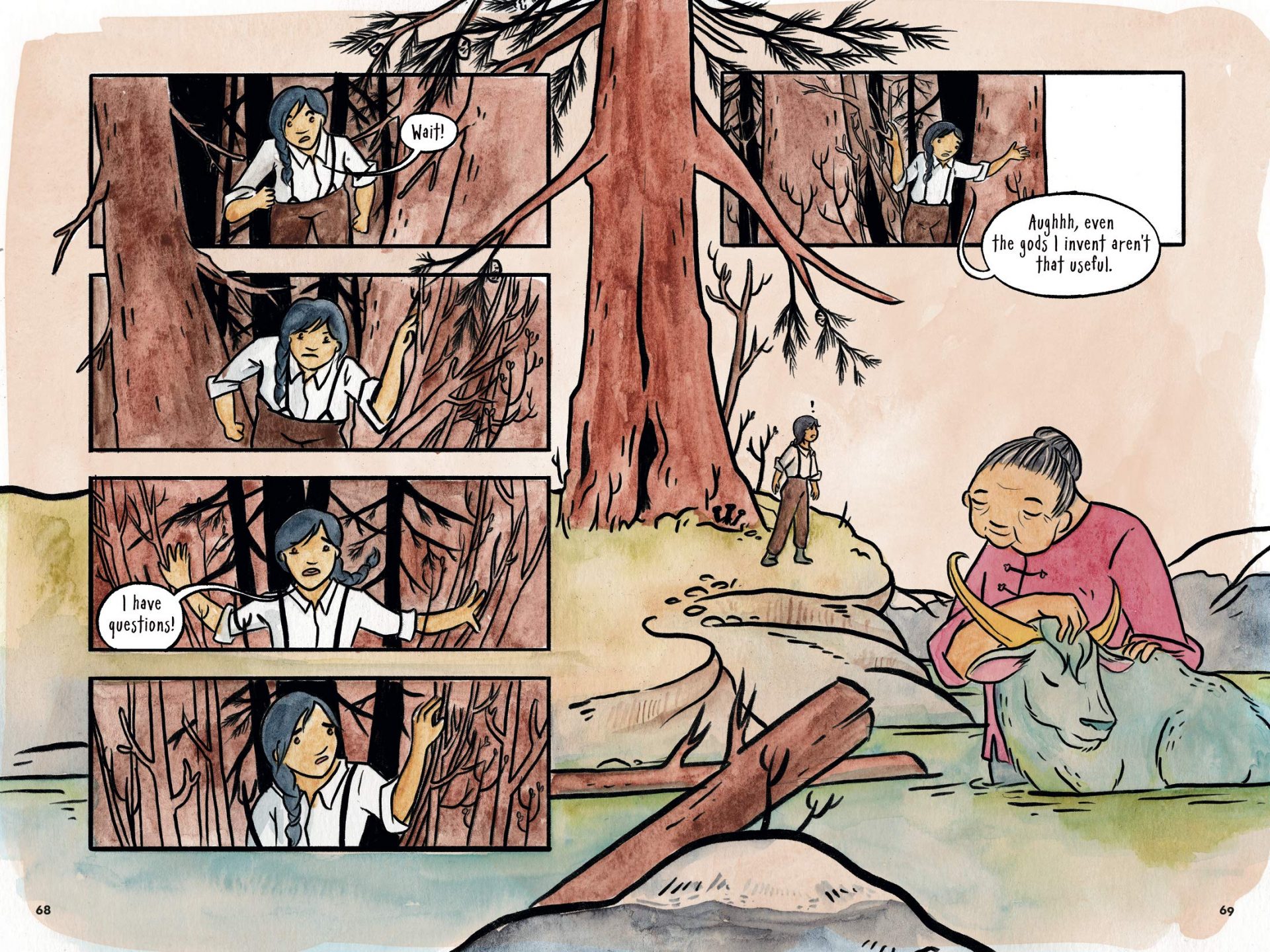 While technology was key, the gorgeous interiors boast delicate watercolors. “I watercolored the entire book traditionally,” Khor shared. “That was extremely fun, even though I think you can tell that I am much more excited about painting landscapes and buildings and food than I am about painting people. The first thing I do when beginning to color a long project is establish my color scheme. It’s easy to get lost in the wide range of options a fully stocked watercolor set has to offer, especially if you’re a paint hoarder like me. I know that immediately limiting my choices will make the book more cohesive in the end. I’ll put my paint options in an entirely new palette, and set aside all my other colors.”

Though it feels very much like a Khor project, the artist pointed out a note on the horses: “I have to admit that I drew none of the horses (or other ungulates) in this book. I got my horse girl friend, Heather Gilbraith, to do that for me. Heather is a horse drawing professional. I would sketch my very awkward horses into my pages and send them to Heather. She would redline them and provide a horse sketch with all the horse muscles in the right place. I would pencil and ink over those sketches for final art.”

They continued. “If any horses look great, that’s because of Heather. If they’re still wrong, that’s entirely on me and I must have screwed it up somehow. I would avoid putting horses in my book for the rest of my career, but sadly, I really do love historical fiction.” 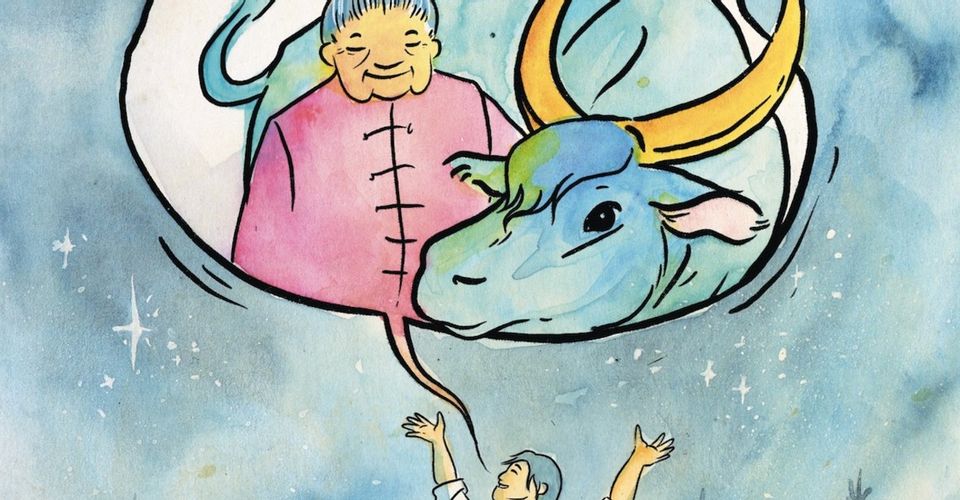 Khor of course brought their own crafty and creative tendencies to designing the stunning tome. “One of the things I loved most about working with Jasmin Rubero to design the book was getting to build on each other’s ideas. One of the early text treatments she chose for the book’s title was styled like a woodblock print. I loved it, but if we were going in that direction, I wanted a chance to make a truly unique title block. So I carved it. The title for Auntie Po is made from hand carved lino block stamps. I accidentally carved them in reverse and had to flip them in Photoshop, and we ended up fixing a lot of the stamping artifacts digitally, but I am delighted that you can still see the stamp texture on the “THE” and “OF” on the cover.”

Readers can spot a Paul Bunyan Easter egg in the striking cover design. “If you lay the cover flat, the background image forms a pyramid, a reference to the ‘Pyramid 40’ (also briefly referenced on page 166 of the book), a 40 acre plot of land shaped like a pyramid which Paul Bunyan worked. The shape of the land meant that it could have a significantly larger amount of trees than a flat piece of land.”

Now that the book is out in the world Khor wants readers to take away one thing from the graphic novel: “The knowledge that they have the agency to tell their own stories.”

The Legend of Auntie Po is available now.