From the first glimpse of DC’s upcoming superhero flick Shazam, it’s been clear that the film is going to be a fun-filled adventure closer to the classic age of ’80s comedies like BigÂ than your average dark and gritty caped crusader fare. But in a new TV spot, the studio has unleashed the true power of Shazam with an action heavy trailer with some goosebump-inducing moments that still never loses the humor that has made the project so unique and anticipated.

For those of you who still don’t know, Shazam tells the story of a young boy named Billy Batson who gets chosen by a wizard to wield the powers of a clan of immortals, thus making him the titular hero anytime he says the word… Shazam! This new TV spot is the first which really shows Billy after he’s gotten a handle on his powers and features a breath taking moment where he launches himself of the side of a building before invoking the powers of Solomon, Hercules, Atlas, Zeus, Achilles, and Mercury, flying into the vast city scape of Philadelphia where the film is set. 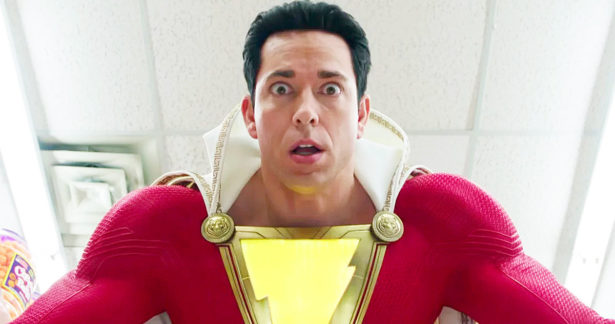 We also get our first proper look at Mark Strong as Billy’s nemesis Sivana, who looks incredibly strong and appropriately scary. Strong is always riveting to watch, and seeing him fly after Levy’s Shazam is a thrilling moment. Also, do we perhaps see a matching lightning bolt under that fancy jacket? Whatever could it all mean??If you’re here for the comedy of Shazam you won’t be disappointed; there’s a great new clip of Shazam and Jack Dylan Grazer’s Freddy Freeman trying to acquire a superhero lair from a confused realtor.We’ve been excited aboutÂ Shazam since the first trailer at Comic-Con last year,Â but this new preview has definitely awoken our inner kid. We can’t wait to catch the film when it hits theaters on April 5, 2019!