After nearly a decade of producing the hit deck-building game Ascension, Stone Blade Entertainment brought its latest deck-builder, Shards of Infinity, to gamers last year. Featuring four factions and two types of currency to manage as well as combat points the game was an immediate hit, with many fans enjoying the fast card play and huge combinations that Shards of Infinity offered.

And just like its predecessor Ascension, Shards of Infinity is getting the digital treatment. Temple Gates Games is producing the game, which is currently in beta testing. Set to be released on Steam, iOS, and Android, the digital version of Shards of Infinity will mirror the analog game, with a 30-minute gameplay time, support for 2-4 players, and all of the unique faction abilities of the original. It will also feature cross-platform support for multi-player games as well as local pass-and-play capability. The neural network AI is based on Keldon Jones’ research. 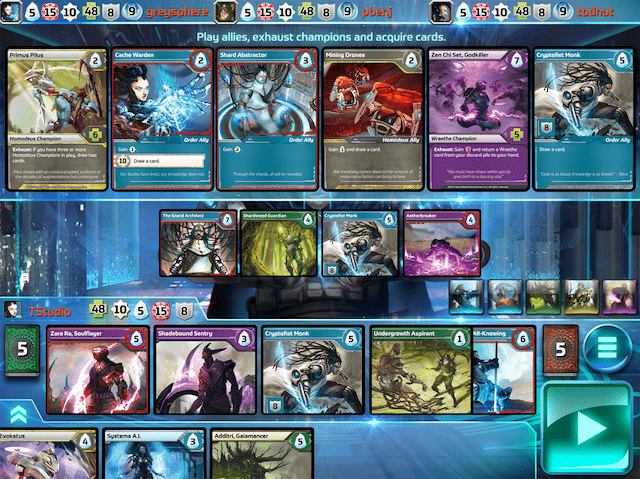 Designed by former Magic: The Gathering U.S. National Champion Justin Gary, Shards of Infinity takes players into the distant future, where the world is in shambles, thanks to the destruction of the Infinity Engine. Players use their cards to rebuild the Engine, gathering shards in an attempt to harness its power before their enemies do.

Like the classic deck-builders Ascension and Dominion, players shuffle and draw five cards at a time, hoping to gain enough currency and combat strength each turn to add more powerful cards to their decks. Shards of Infinity, however, introduces new elements such as Mastery and Mercenaries that speed up play without losing any of the feel or depth of established deck builders. Players build Mastery during each turn apart from their normal actions, eventually unlocking stronger abilities on their cards. Mercenaries allow players to use a card’s ability immediately without adding them to their decks.

Look for the digital implementation of Shards of Infinity coming soon.