Throw Down In Epic Comic Character Battles With ‘Marvel Contest of Champions: Battlerealm’

It’s an argument most comic readers have gotten into at least once during their time as a fan: who would win when their favorite heroes are pitted against each other? You could take the time to scour through the comics themselves (and see the awesome post-Civil War beat down Thor gave Iron Man) or you could settle it yourself.  That’s where Marvel Contest of Champions: Battlerealm comes in handy.

Getting set up and into the brawl is fast and easy. Becca’s more than happy to teach you How to Play:

Now you don’t have to be a comic book aficionado to enjoy this game. Even if you know nothing about the comics (or have only watched the movies), you can jump right on in.

The components are to die for: each of the 13 heroes comes with their own card with counter wheel and a thick cardboard standee that will hold up to multiple games. Not to mention that the box is laid out in such a way that your pieces won’t get jumbled up and mixed, so you will always be ready to throw down.

One of the cool things they did was to make sure each character stands out from the rest.  They did this by giving them unique different power cards that go off of different dice rolls. So Ant-Man’s Ant Swarm doesn’t go off the same dice combination as Captain Marvel’s Energy Absorption. Each character also starts with varying amounts of PVP on their wheel, basically showing how tough it is to knock them out of the game. Because let’s face it, it is way harder to knock out the Hulk than it is to kick the crap out of Hawkeye (as much as we adore Hawkeye, you know it’s true).

They each have three special abilities on their cards. Flight makes it so Iron Man can move around the board and collect sweet PVP points from multiple locations easier, but don’t knock Survivor’s ability to get an extra turn after you lose your last PVP point (we’re looking at you Guillotine). 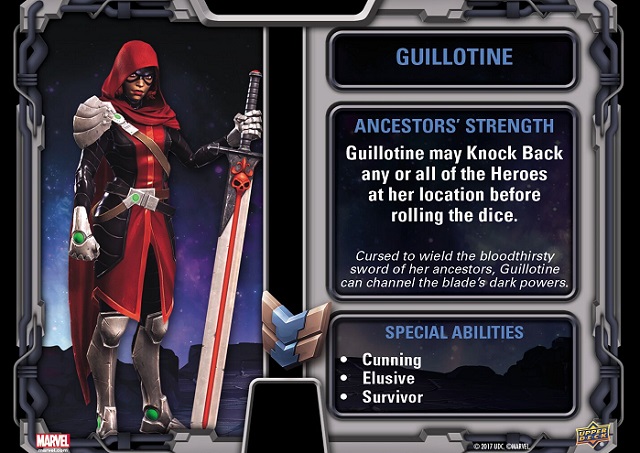 Yahtzee-style rerolls keep you from getting bogged down by completely random dice luck, although it makes it more likely that you will roll three Science or Mutant dice. They make each symbol unique to its element, so colorblind players can easily distinguish what they rolled without having to ask another player. Just beware of those three Mutant symbols, as those send you to the Crystal Prison where you need to roll three of a kind to break back out. Three Science dice equals an explosion on your location, so be super careful when you are doing your science experiments.

The deck of location cards is huge, especially when you consider you are only using up to seven of them in any one game. Each location gives you PVP points when you first land on it, and yes, you can move multiple times in your turn if you get enough Cosmic symbols. They also have special abilities that can either help or hinder you during the game (some give you extra symbols to use after your roll).

If a hero gets knocked out, the location they were on gets removed from the game. This is a cool cinematic effect that shows how hardcore and explosive hero battles can be. It also shrinks the board so you can get to other heroes faster.

Gameplay is quick, with an average game taking between 30 to 45 minutes, making it a great addition to your game day. You can see the game in action on our Game the Game playthrough:

You can also catch the action as we’ll be busting it out on our  International Tabletop stream this year! So be sure to tune in on April 28, starting at 9AM Pacific on Twitch, Alpha, and YouTube.

Are you ready to throw down and settle old scores? Learn more about  Marvel Contest of Champions: Battlerealm by visiting  Upper Deck’s website. Who’s your favorite Marvel hero? Tell us in the comments!