Set Sail for Adventure With This Amazing Pirate RPG! - Nerdist

Set Sail for Adventure With This Amazing Pirate RPG!

7th Sea, a role-playing game of piracy, bold exploits, and derring-do, is finally available for sale after being the most-funded tabletop RPG in Kickstarter history. The game combines a fun, fascinating world of intrigue and adventure with a 21st century role-playing game design.

Originally released in the late 1990s, the world of 7th Sea has become legendary. It is set on Théah, which is like 17th century Europe, but not. There is an abusive monarchy in a nation ripe for revolution called Montaigne. The island nation of Avalon has a strong navy and is led by a queen. There are equivalents for Ireland, Italy, Spain, Russia, and the list goes on.

All this may seem confusing at first. If the Highland Marches are really Scotland, why not just call the place Scotland and be done with it? Setting the game in un-Europe allows history to become a smorgasbord from which designers can pick the most interesting things that ever happened in Europe and make them occur nigh-simultaneously. For example, in Théah, the analogs for the French Revolution, Protestant Reformation, and discovery of America all happen close to each other in time, while in European history they were scattered across centuries.

Behold the glory of Théah! 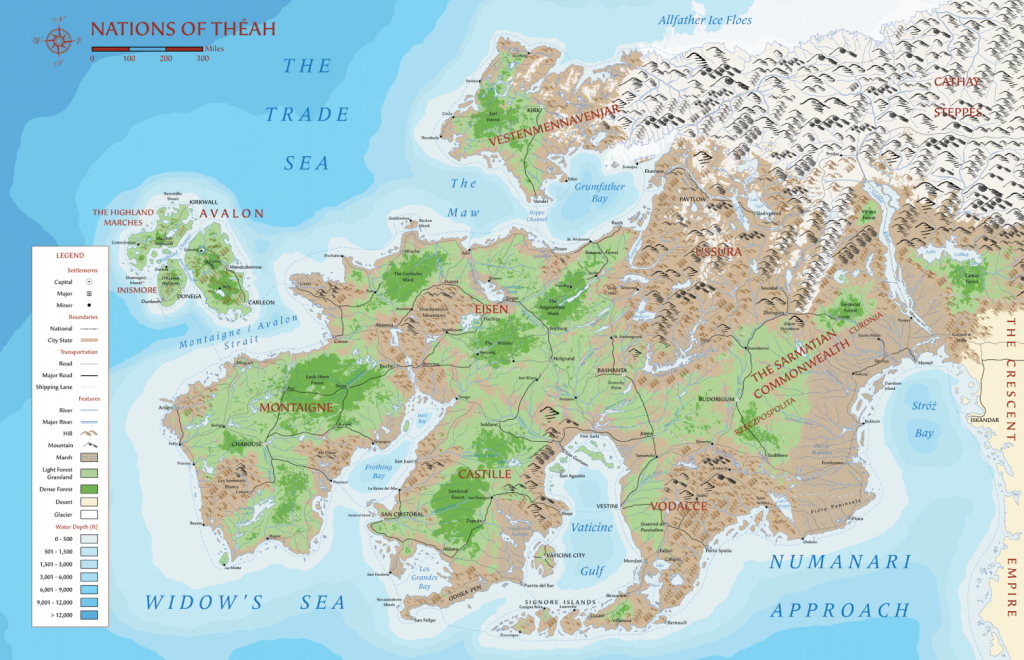 In addition to all the fun of European history, the world has magic, secret societies, and ruins to explore. In 7th Sea, sorcery is what sets the nobleman apart from the commoner. He rules because he has better blood, and he can prove it by doing magic. Scattered everywhere across Théah are ruins of a previous civilization called the Syrne. Objects of mysterious but potent power are often found in the ruins, along with terrible dangers… Théah is also rife with secret societies; Sophia’s Daughters seek to free women of their bondage in the nation of Vodacce and the Rilasciare wish to overthrow monarchy and the church in the name of freedom.

How the Game Rolls

As an old fuddy-duddy of an RPG player, I grew up playing in incredibly detailed game worlds, such as the World of Darkness and the Forgotten Realms. While those worlds still call to me, the mechanics of many of those games have aged poorly. 7th Sea keeps the detailed world it had in the 90s, but marries this rich background with sleek, modern, game design.

The core mechanic of the game is that of the Risk. Say your scurvy sea dog wishes to swing from her ship, The Grog Fighter, to a frigate of Her Majesty’s Navy which has just pulled alongside to broadside you. After the GM describes the scene, you decide on your character’s Approach (how will she accomplish her desired task). Will she jump from ship to ship? Swing on a rope? Throw down a boarding plank? This also defines the skill rolled. 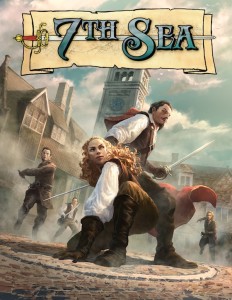 The GM then lists the Consequences your character will face. Consequences are “everything that can hurt or hinder your Hero while attempting her Risk.” In the example above, your character would have to contend with the rocking decks of both ships, and the shark that is eagerly circling the waters below.

But it’s not all bad. Risks sometimes come with Opportunities for your character to exploit. Perhaps the captain’s wife has fled to the side of the ship nearest you, and if you cross and take her hostage, this battle will be over before it starts.

Now, you roll ten-sided dice, and total them. For every ten rolled, you can buy an Opportunity, or buy-off a Consequence. Roll 20 in the example above, and your hero will successfully swing over to the naval frigate and take the captain’s wife hostage.

The reason I have described the mechanics of the game at such length is because they so perfectly fit the source material. You want to scale a wall? Well, instead of the GM simply coming up with a difficulty number for you to succeed at the task, she is forced to describe the wall, and how it is slick with algae from the recent rains, but there is a stone a different color from all the others. Could it be a secret passage? The 7th Sea mechanics encourage excitement, risks, and moving the plot forward at a breakneck pace. And the buying off of Consequences and Risks means players must engage thoughtfully with every roll. There is no simple, “I rolled a 16. I guess I climb the wall.”

The past few years have seen a number of deep world role-playing games cloned or rebooted with 21st century mechanics. Dungeons & Dragons and White Wolf’s World of Darkness were cloned using the Powered by the Apocalypse system into the vastly easier to play Dungeon World and Urban Shadows respectively. Vampire: The Requiem 2nd edition likewise took an old and beloved property, kept the world, and improved the mechanics. Call of Cthulhu 7th edition fixed long-standing mechanical problems.

We appear to live in a Renaissance of game mechanics, so roll on gameratti.

You can pick up a PDF of 7th Sea here, and preorder a physical copy here.

Thanks to Mark Diaz-Truman for his help with this article.