'Seikatsu' is a Beautiful Game of Perspective, Tension, and Birds - Nerdist

‘Seikatsu’ is a Beautiful Game of Perspective, Tension, and Birds

Seikatsu begins when you sit down at the table. In most games, where you sit only affects turn order which rarely makes a difference. In Seikatsu, where you sit determines your perspective and that is the game. Where you sit – and thus what you see – will determine your points at the end of the game in a clever scoring system I haven’t encountered before.

I’m a big fan of tension in board games. I want to be hiding my hands under the table so my opponents don’t see how nervous I am, heart racing as I plot my turns. This usually comes to me in the form of negotiation, arguing, and cajoling. There isn’t really any of that in Seikatsu. Players are working together, sort of, to fill a Japanese garden in the center of the table. The tension comes from the unique end game scoring system that sees you realizing that you gave your opponent more points than you scored for yourself.

In Seikatsu players take turns laying acrylic tiles onto a communal board. Each tile features 1 of the 4 different types of birds and 1 of the 4 different types of flowers. These gorgeously illustrated tiles are used to collected two different kinds of sets. The first is pretty easy to do. Birds score for flocking together; place a bird and you score 1 point for each bird of the same type it’s adjacent to, including itself. This is the only way to score points while taking your turns. 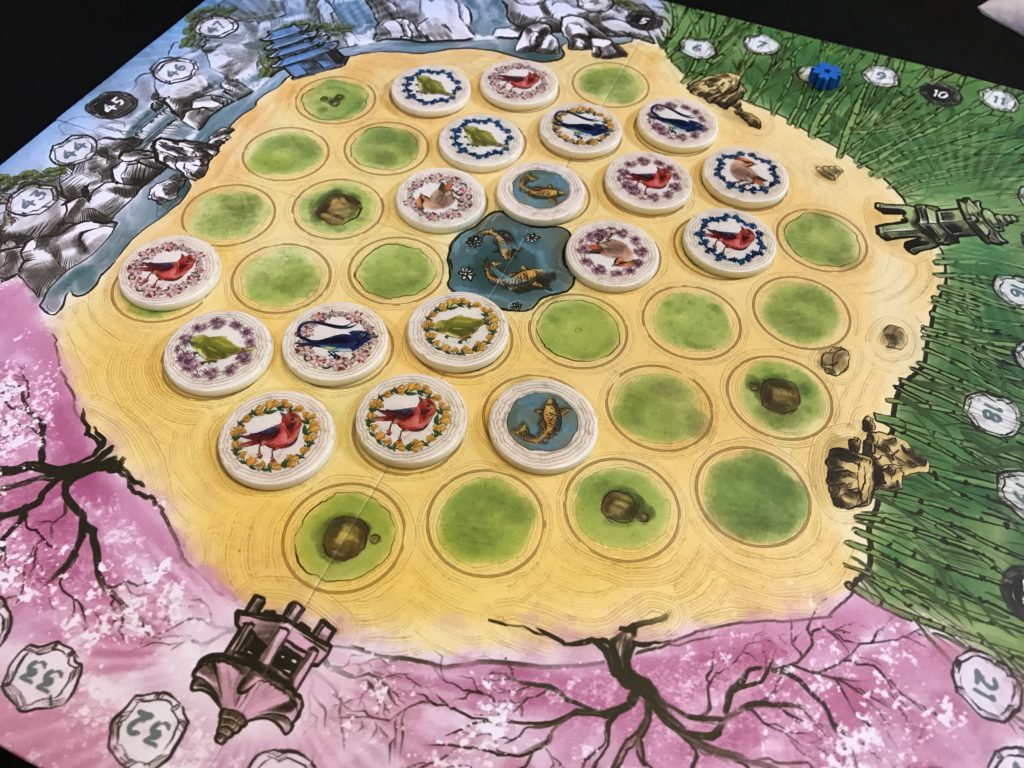 The flowers also score as sets, but the mechanism is completely different. The playing surface is large hex made up of tile spaces arranged so they make columns. At the end of the game, each column will score based on which flower type exists in the highest quantity. Having 3 blue flowers in a column is worth less than having 5, and so on. This is where your perspective comes into play. The board is positioned such that each person is looking down a different set of columns. My leftmost column may have 2 blue flowers in it but each of those flowers is in a different one of your columns.

This simple scoring feature gives Seikatsu dramatic tension. You aren’t just deciding which space to put a tile on to increase your count, you’ve got to recognize that each space is actually an intersection of 3 competing columns. Ideally, you’re placing some pink flowers in such a way that adds to your set while blocking your opponents from piggybacking off that placement. It adds a clever spatial wrinkle to every turn as the threat of your opponents scoring big points off something you played earlier looms over every placement.

This is the same board from 3 different sides. Each player has 7 columns, but which tiles are in them is completely different. Note how Green’s center column has 1 empty space but Blue’s has none.

Seikatsu is a game of balance. You must play your tile adjacent to one that’s already on the board which means you won’t always have a great play. There is a push and pull as you press an advantage and stack a column at one point in the game only to have to play defensively later to prevent an opponent from doing the same. All along the way, you’re watching for the chance to eek some point out of a flock of birds or set up for the future.

This peaceful ebb and flow is broken up in only two ways. The first is the end of the game. I usually sit back at the end of any tile laying game, content with the little world I’ve built. There is no easy contentment in Seikatsu; my world is also my opponent’s world and watching them score more points with the same tiles hurts. Unfortunately, the lack of hidden information also means there’s the potential for the game to stall. Every placement has three perspectives to consider so if your group is the type to want to consider every option then things can move a bit slow.

This problem is less present with 2 players and non-existent when played solo. The solo mod is a lot of fun for when you have 10-15 minutes to kill and is surprisingly tricky. There are slight rules tweaks, but nothing significant. While you are comparing your score to a phantom player, the game doesn’t feature an unsatisfying “dummy player”. It’s more of a shifting puzzle that you attempt to navigate and hope to not give up too many points.

Nothing about this game is complicated – the sets are easy to understand, the rules simple – yet the actual play is a beguiling puzzle. The pleasant art and simple systems bely a deeply tactical experience I keep coming back to play. I haven’t played a game that relies on different player’s perspectives to dictate scorings but I found myself really appreciating the nuance it brings to tile-laying. It takes advantage of physical space in a way few games do and the result is an excellent game.

What’s your favorite flower? Tell us in the comments!