There’s nothing quite like laying on a blanket on a cool summer night and watching the stars gently glide across the dark sky. Summer nights might be ideal for stargazing, but they’re also the best for game nights with friends.

These three celestial-themed games will have you and your friends seeing stars during an unforgettable game night. And even better, you won’t need mosquito repellant for this kind of stargazing.

Colorful dice roll across the table like shooting stars in this game from Wiz Kids. Dice Stars is a family-friendly dice game that seems simple enough on the surface: roll the dice and then decide where to fill out the score sheet to earn the most points.

On a player’s turn, they begin by announcing the number of dice they’ll be drawing and rolling from the bag. After the roll, they must decide whether to mark down dice of the same color, same numbers, or stars. Dice are then discarded or added to the reserve, and it’s the next player’s turn. Stars can double the score or reduce it to 0, so be careful when you shoot for the stars.

This card game combines classic trick-taking gameplay with real celestial objects that will make you an expert in the moons of the solar system with almost no effort at all. Different objects in space mark the four suits. The first player chooses a card, and each player around the table must then play a card in that suit. The player with the highest number on the card of that suit wins the trick.

They then take a token matching one of their cards on the tableau. Collect 3 or more tokens of a kind or a set of 4 different tokens for more victory points, or earn one victory point per token collected. Asteroids mix up the gameplay by letting you mess with your fellow players or protect your own cards. 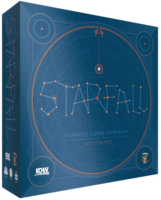 StarFall is an all-ages set-collecting game from Scott Almes, designer of Tiny Epic Galaxies. Players are astronomers at the Royal Hinterland Observatory, competing to discover and claim the most celestial objects. Each player begins with a number of white and orange stardust pieces. On each turn, a Sky Tile is drawn from the pile and placed around the Stargazer Board.

If a player is ready to discover that Sky Tile, they buy it with the stardust pieces matching the number the tile is adjacent to on the board. Previously purchased Sky Tiles can also be used to pay on other tiles. When the game is over, use the scoring sheet to tally the points and determine who is the top astronomer.

Which games do you like to play on a warm summer night? Tell us your picks.