Even by the dubious standards of the Nightmare on Elm Street franchise, Freddy’s Revenge has always been considered one of its worst entries. But if there’s one thing fans can be relied upon to do, it’s to reappraise condemned, dismissed or forgotten films and give them new life. Though outwardly purported to be a celebration of this weird, deeply uneven, subtext-heavy follow-up to what has rightfully become one of horror’s all-time greatest films, Scream, Queen! My Nightmare on Elm Street holds far different, and far more meaningful ambitions than convincing people to go back and give it a second chance.

Focusing on star Mark Patton and his return to the entertainment industry after decades-long, self-imposed exile, Roman Chimienti and Tyler Jensen’s documentary looks at a person whose life fell apart at the exact same moment his dreams came true, and about how he handled those twin burdens before learning to accept his legacy – and recognize it as a gift he can pass on to others.

By 1985, Mark Patton was poised to become a big star; he’d already appeared in both the stage and screen versions of Robert Altman’s Come Back to the Five and Dime, Jimmy Dean, Jimmy Dean and was being groomed for other high-profile television and film roles. He was also gay, not that anyone other than those in his inner circle knew, including his partner, Dallas star Timothy Patrick Murphy, knew that. But when Freddy’s Revenge came along in 1985, Jack Sholder’s follow-up oozed with strange details that departed from the mythology of the original Nightmare on Elm Street, and seemed particularly odd in the mid ‘80s, when the AIDS crisis was exploding into the mainstream and homophobia was rampant.

Was it a “gay” movie, intentionally or not? No one would explain, but Patton’s performance would later earn him the title of “scream queen,” a distinction reserved for, well, women, thanks to a performance that seemed to amplify all of those questionable elements. But the combination of attention – mostly bad – that the film received, the loss of Murphy to AIDS in 1988, and the discovery that he’d himself contracted HIV not only drove the actor deeper into the closet, but prompted him to leave Hollywood altogether at the exact moment he’d achieved mainstream success. 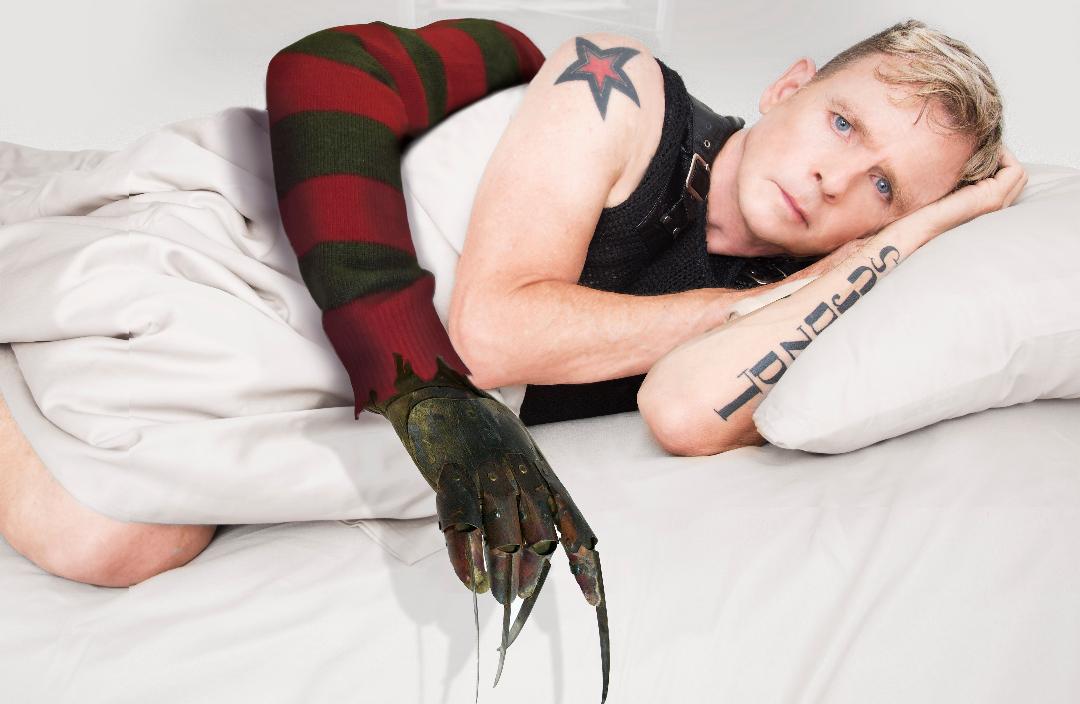 Patton disappeared to Puerto Vallarta where he restarted his life as an art dealer when Dan Farrands contacted him in 2010 for the Nightmare on Elm Street documentary Never Sleep Again. It was the first time he had spoken publicly about the film in almost 25 years, but it wouldn’t be the last; he soon became a fixture on the convention circuit, making appearances and speaking with fans. But what he discovered is that there were whole generations of moviegoers who had embraced the film’s homoerotic twists and turns not just as a camp classic, but as an essential gay text that had piqued their own sexual discoveries and shown them there were unique and different stories to tell within the framework of a genre story.

That said, his reclaimed stardom felt increasingly bizarre in the context of interview comments from director Jack Sholder and especially screenwriter David Chaskin, who’d only embraced those elements in recent years after claiming Patton’s performance had shoved his straightforward text into mincing, cliched territory.

Scream, Queen follows Patton as he embarks on a series of convention appearances, culminating first in a reunion with his fellow cast and crew members. Finally, a showdown of sorts with Chaskin, from whom the actor seeks an apology for shouldering fans’ enmity for so many years about the film, and to some extent, for feeling compelled to abandon his career at the height of the AIDS scare. That second motive drives him through much of the film, but what eventually happens is sort of wonderfully revelatory as he realizes that confronting Chaskin is less about getting the screenwriter to confess his choices than for Patton to reckon with his own. What happened to the gay community in the 1980s was absolutely brutal – almost unimaginable – but Patton discovers that his own survival, his identity, and his legacy is up to him to define.

Forgiveness is an interesting phenomenon in a time where so much cultural effort is dedicated to punishing transgressors and eradicating offenses, because the former is always about ourselves and the latter two about others. Patton’s journey in the film is one of acceptance, and of grace – not just about his connection to a movie that has shifted in the popular consciousness, but in recognizing that Chaskin has become an unfair target for decades of his own resentment and anxiety, just as he was that for people who held him responsible for the film’s quality as its lead actor. In confronting Chaskin, and participating in Chimienti and Jensen’s extraordinary Scream, Queen, Patton comes full circle on who he was, is and wants to be, bringing his long nightmare to an end that’s cathartic for him, and deeply enlightening for us.