Save the Universe from Destruction in Glorantha: The Gods War - Nerdist

Save the Universe from Destruction in Glorantha: The Gods War

Glorantha: The Gods War is a tabletop geek’s dream. Just ask the many, many backers who have so far donated over $300,000 to the upcoming game’s Kickstarter campaign. It’s a strategy heavy project set in Greg Stafford’s Glorantha universe, which saw its origins in his fantasy wargames way back in 1975. Since then, Glorantha has inspired a slew of roleplaying games, graphic novels, video games, and now, this new board game project by Sandy Petersen, who worked with Stafford’s own publishing company, Chaosium.

Each player assumes control of a cosmic elemental force, establishing their own little in-game empire. There’s a lot to do when you’re the ruler of an empire during the end times. You’ll need to pursue Heroquests and earn gifts in order to spread your influence and defeat your opponents. 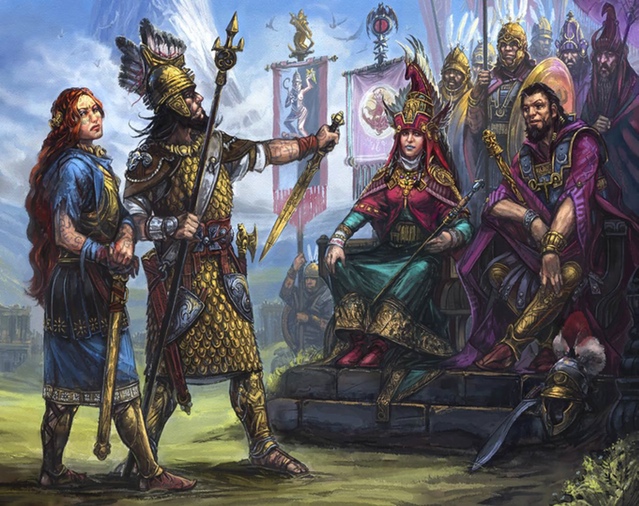 Empires differ greatly depending on the faction with which you ally; with varied units, heroes, gods, buildings, and gifts. Players must develop unique strategies designed for each cosmic force, allowing for deep gameplay with plenty of options to keep things interesting each playthrough.

The Gods War plays similarly to Cthulhu Wars, also published by Petersen Games. The game is split into three phases, and players will need to complete each phase before moving onto the next. You’ll rotate through the phases until one player earns 40 Victory Points, after which players tally all of their points to determine the winner.

Each phase is packed with smaller sub-phases. First on the docket is the Action Phase, where players can construct or upgrade buildings, summon a unit onto the board, and move characters across the map. If it’s glory in battle you seek, the Action Phase is the opportune moment to strike against your enemies and conquer territory. As the game progresses, you’ll be privy to gifts which offer their own unique actions you can spend during this phase, too.

The second phase, dubbed the Power Phase, is a bit more simple in that you’re basically taking this time to collect power from buildings and units you gained in the Action Phase. Your power is charted on a Power Track to help you remember. Some abilities and gifts are also active only in the Power Phase.

The final Council Phase is sort of where the “story” happens. Players tally up additional Victory Points based on buildings and units on the map. When a player reaches a set number of points, different in-game instances activate, and the players work together to complete them. These events involve high-stakes, world-saving stunts like closing the Chaos Rift.

It’s a lot to take in, but if you love resource management and empire building, The Gods War is shaping up to be a layered fantasy experience with lots of changeable gameplay. The game looks quite nice, too, with dozens of intricate miniatures that will delight any enthusiast. You can try out a printable version of the game for free over at The Gods War’s Kickstarter, which runs until September 15.

Excited to add Glorantha: The Gods War to your own collection, or think you have a gaming Kickstarter project we should know about? Tell us in the comments!