The Evolution of Queer Humor on SNL

To say I grew up with Saturday Night Live would be an understatement. When I was still too young to watch, I would listen through the grate outside my bedroom door as my parents watched. At family parties, we would watch the “best of” VHS compilations. But I also knew “It’s Pat” before I’d ever heard the word transgender, or that there were real options for kids like me to live beyond the binary. The closest thing to “representation” I remember on SNL in the ‘90s and 2000s was “Ambiguously Gay Duo” and “Mickey the Dyke”—characters created by straight people. SNL is now something I look forward to because the show is finally for and by us.

It’s damning that, in its 46-year history, SNL has only had six openly gay cast members. Three of whom—Kate McKinnon, Bowen Yang, and Punkie Johnson—were part of the most recent season. Terry Sweeney became the first openly gay person to join the cast in 1985. But Sweeney faced harassment from the likes of Chevy Chase and was only on the show for one season. It was more than 25 years before SNL hired another gay man, John Milhiser, in 2013; he too only stayed on the show for one season. Denny Dillon, a member of the 1980-1981 cast, was the first lesbian cast member, although she wasn’t out at the time. Danitra Vance, a cast member on the same season as Sweeney, was also an early queer cast member, though she remained closeted from the public for her entire life.

For decades, SNL has made hay out of dudes kissing dudes, and they do to this day. Another popular genre is “look at this weird/creepy queer!” It appears with the likes of Mango, Jeffrey’s, and Stefon. Though the latter character is beloved by many, he was written and performed by straight dudes, and it showed. He lacks the authenticity of later work from head writers Chris Kelly and Sarah Schneider or writers Julio Torres and Bowen Yang, as the character is constructed as a way to say increasingly offensive things in an effort to make Bill Hader break. 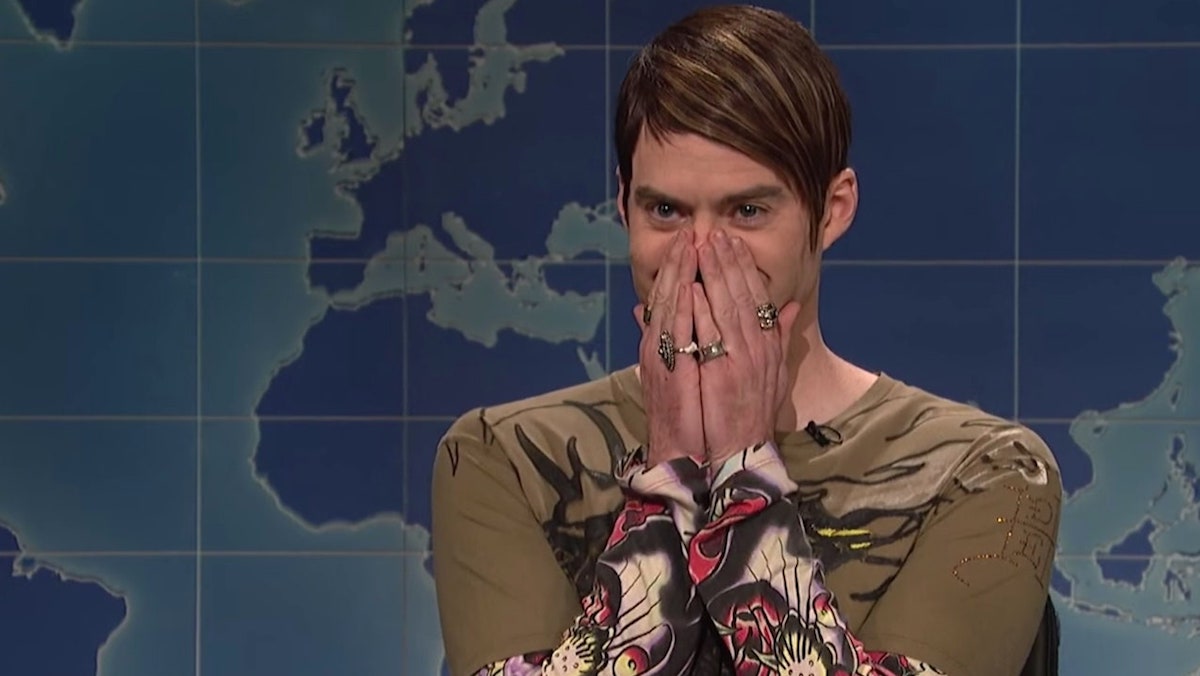 The ’90s were an especially rough time on SNL. The show really put in the work on transphobia and homophobia when they created “ It’s Pat.” The premise is an inoffensive, unassuming androgynous person, played by Julie Sweeney, going about as other people continually try to discern Pat’s gender. What could honestly be a PSA in the value of both gender neutral terms and politely asking someone their pronouns has instead been used to torment kids and adults across the LGBTQ spectrum since 1990. The character, referred to as “it” and “that” in the theme song, appeared in over a dozen sketches and a movie. “It’s Pat” has staying power. On Freeform’s Good Trouble, a bigoted mentor compares Lindsay, an aspiring stand up comedian played by real life comedian RB, to the character Pat. Over on Showtime, Abby McEnany’s comedy Work in Progress contends with her experiences being compared to Pat her whole life.

Cheri Oteri’s “Mickey the Dyke,” a one-note butch stereotype literally named Mickey the Dyke who wonders if she should come out, debuted in 1995. It’s bizarre and jarring to hear Will Ferrell cavalierly say “Mickey the Dyke” like he’s reading the name of a Christmas story. Thinking about the kid who followed me home from middle school calling me dyke and throwing rocks at me, it’s not hard to imagine he might have picked up the word from a show like SNL.

It’s even less funny when you consider that writer Paula Pell started working at the show the same season “Mickey the Dyke” premiered. Pell didn’t come out to her colleagues for at least another five years; she came out at work in February 2001, the week she wrote “ Homocil,” a medicine for parents of gay kids with longtime writer James Anderson, who is also gay. With the tagline, “Until you come around,” Pell and Anderson’s queer take on the show’s tradition of fake commercials shows little boys baking and bedazzling while Will Ferrell writhes in pain and Tracy Morgan gobbles down pills. But the commercial is clear about two things: the parents can’t change these boys, and any anxiety the parents experience is their problem. See also: the 2013 sketch “Xanax for Gay Summer Weddings,” for boring heteros anxious about attending perfect gay weddings.

In 2011, SNL hired Chris Kelly, who went on to become the show’s first gay man as head writer. Under him and co-head writer Sarah Schneider, the show got good ratings and multiple Emmy nominations. They also prioritized hiring LGBTQ folks, including Julio Torres and Sam Jay. After Kelly and Schneider’s departure, Bowen Yang was hired first as a writer in 2018 and then as a cast member the following season. Yang’s addition to the cast was somewhat overshadowed by the controversy over Shane Gillis‘ hiring (and subsequent firing after his anti-Asian, homophobic, and anti-Semitic comments came to light).

In 2017, host Kristen Stewart used to opening monologue to iconically confirmed that she’s “Like, so gay.” Opposite Vanessa Bayer, she was the heart of the queer coda to the painfully straight 2015 and 2016 Totino’s sketches, sublimely changing the series’ gag (from “look at this sad, bored housewife” to “Kristen Stewart is so hot, and straight men are so unfulfilling, that she can make a pizza roll Cannes-level romantic) and immediately overshadowing the previously installments in importance. 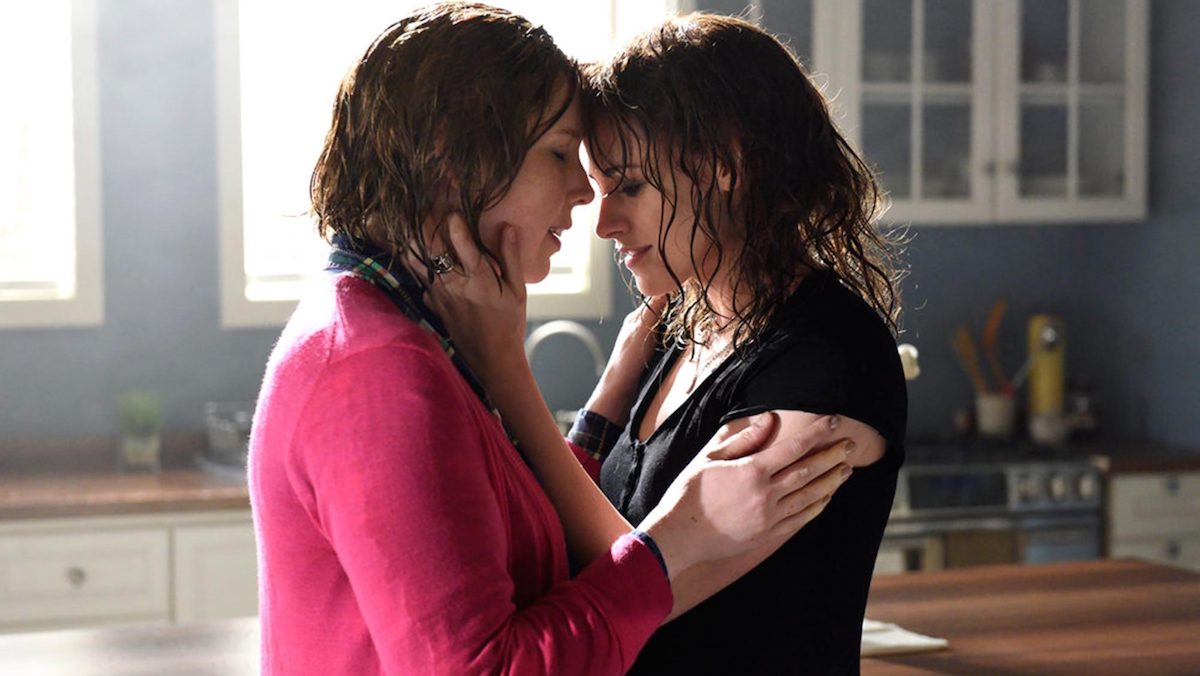 Contrast the 2014-2016 fan-favorite “ Dyke and Fats” with “Mickey the Dyke.” Both use a word many cishets might (now) find uncomfortable or even objectionable. But “Dyke and Fats” is a fun, silly take on the buddy cop genre while “Mickey the Dyke” makes my skin crawl. As Aidy Bryant’s Fats reminds their commanding officer, “Only we get to call us that!” The sketch underlines the fact that you can only reclaim words that belong to you in the first place.

Similarly, this year’s “ Lesbian Period Drama” could have been a disaster in the wrong hands. Instead, the jokes that really hit (Oscar-nominated glance choreography, lesbian site review: “Sure, I mean I’m gonna see it”) could only be written by someone who has actually watched dozens of lesbian period dramas, fruitlessly hoping for something other than a tragic ending. The sketch uses Kate McKinnon and voiceover to comment on the male gaze and Hollywood’s practice of casting (and rewarding) straight, white actors in LGBTQ roles.

Some of the best queer sketches are full of niche references and don’t particularly bother to explain themselves to SNL’s long-presumed-straight audience. A 2017 episode with Billy Porter stopping by for a cameo saw Kate McKinnon channeling drag queen Sasha Velour as Elizabeth Warren at CNN’s LGBTQ Town Hall, offering no context or explanation for the sketch’s climactic wig-and-rose petal reveal. In 2021, Kate McKinnon and Aidy Bryant competed in the Supermarket Sweep sketch as just two good friends living in a one-bedroom in Vermont and dominating the straight couples on the gameshow. There are plenty of jokes for all audiences, but queer folks will recognize the “gal pal” phenomenon.

In recent years, more sketches have benefited from simply a touch of queerness. In the sexy Zillow ad, host Dan Levy and Yang, the only couple in the sketch, scroll through the app together. It’s hard to remember another time on SNL when a sketch calling for a generic couple represented a gay relationship.

Moreover, there’s a queerness to many new sketches that aren’t explicitly about anything gay. This season’s “Driver’s License” pool hall sketch, for instance, subverted expectations of both toxic masculinity and, frankly, SNL sketches. 1990s SNL would have seen a group of straight men in a bar mock the one guy who likes a song written by a teenage girl. But 2020s SNL sees the group having an in-depth conversation about women’s pop music before swaying and singing along at the top of their lungs.

During 2021’s Anya Taylor-Joy episode, which was so gay that Lil Nas X’s pants could scarcely contain him, a prerecorded Pride song featuring Nas himself (and Yang in a harness!) called out rainbow capitalism and straights taking over pride. With this sketch, from Yang, Sudi Green, and Celeste Yim, the queers of SNL have gone beyond being in on the joke. They unlocked a new level of DGAF, making fun of their straight neoliberal audience, while also lamenting unfulfilled crushes, lesbians moving in too soon, and the desire to be hot instead of funny. 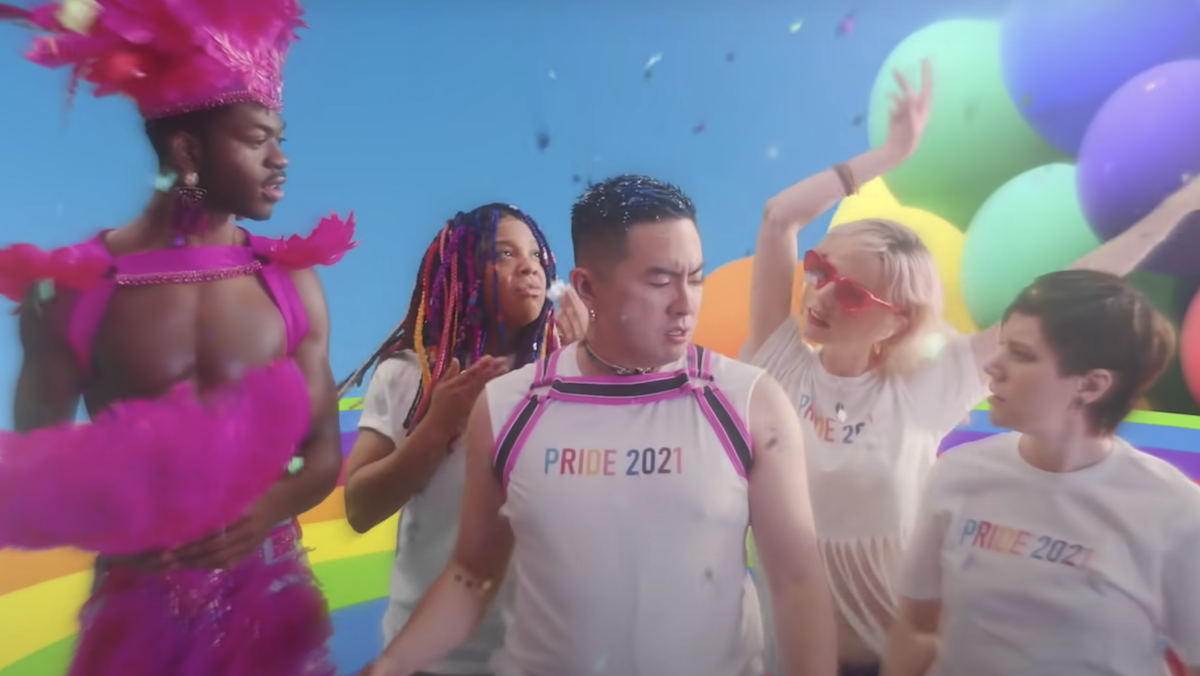 Of course Saturday Night Live is by no means a queer utopia these days. Much of the problematic material focuses on men kissing men and transphobia. “Weekend Update” is a frequent offender, relying on cheap laughs like Michael Che’s “ don’t ask, don’t tuck” line. Instead of mocking the then-president, who imposed the ban on transgender people in the military, or even Biden, who repealed it and whom the joke saddles with giving the policy the offensive name that forms the basis of his joke, the real target is transgender folks. The continued use of jokes like this sets a tone, both for viewers and those involved in creating the show.

SNL has come a long way in its nearly 50 years on the air. While the show still has room for improvement, particularly in terms of racial diversity and transphobia, it’s no coincidence that much of the best material involves queer cast and writers. Entire sketches are written from LGBTQ perspectives, skewering queer culture in the way that only those who know it can, without worrying if the heteros are upseteros because they don’t understand. After decades of being the butt of the joke or simply being tolerated, it has felt good to look forward to watching SNL and actually getting to laugh, like everyone else.