You might think you’ve seen all the cat videos on the internet, but here’s one you haven’t: the first known footage of sand cat kittens in the wild. It takes a lot to make us squee nowadays but wow—LOOK AT THEIR LITTLE FACES.In case you aren’t familiar with them, sand cats ( Felis margarita) are an adorable species of impossibly tiny cats that are perfectly adapted to live in the deserts of North Africa, the Middle East, and Central Asia. They have a light brown/tan fur that blends in with sand and brush, and their extra-furry paws protect the sand cats from hot sand (and barely leave a trace of where they’ve been). Those oversized ears are not just super cute; they also give the sand cat exceptional hearing for tracking down its prey, typically small rodents, birds, or lizards. 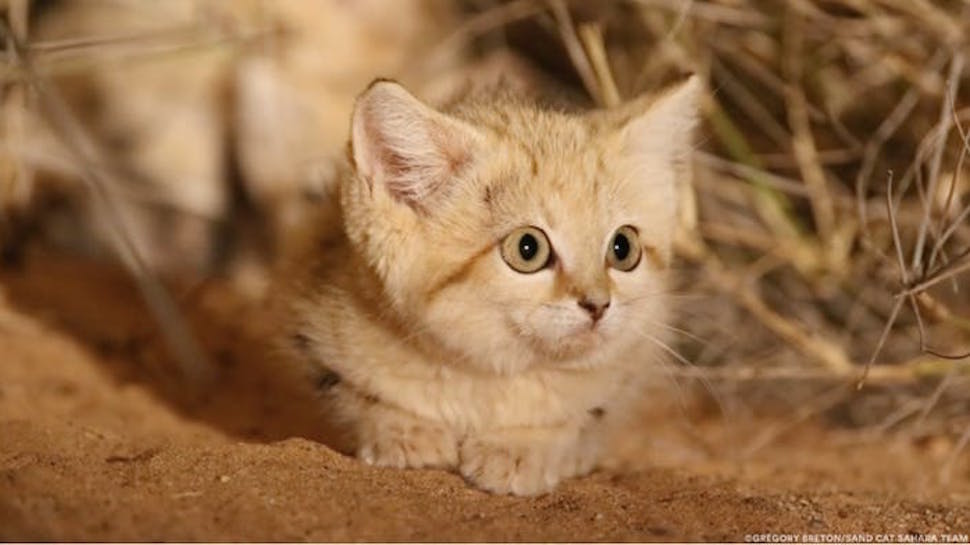 Because sand cats are so well-adapted to their desert environment, footage of them in the wild is pretty hard to come by, and video of wild sand cat kittens was completely unheard of. Until now, that is. Breton, a wild cat expert and managing director of Panthera France, spotted the kittens during a recent expedition in Morocco. According to a blog post on the Panthera website,

It was 2 a.m. in the Moroccan Sahara, and I was heading back to camp after seven hours of driving through sand, dust, and prickly vegetation on my fifth and final expedition to document sand cats. I was chatting with our local driver, Elhaj, to keep him awake, while my colleague Alexander Sliwa spent a few more minutes squatting on the roof of our Toyota Land Cruiser shining spot lamps into the bushes, close to giving up.Then, it happened. Three pairs of eyes gleamed back at Alexander through the darkness about 4 kilometers from our campsite. They belonged to young sand cats, yellowish, small wild cats with broader faces and larger ears than domestic cats.

Sand Cat Kittens Spotted in the Wild for First Time from Panthera Cats on Vimeo.

Breton’s team spent an hour getting pictures and video of the kittens, as well as an adult sand cat they believed to be their mother. Because the kittens were pretty young Breton estimated them to be between six and eight weeks old. His team did not catch and radio-collar them, though they did put a radio collar on the adult in order to learn more about how sand cats act in the wild.

But while sand cats are hard to track down in the wild, they aren’t currently endangered; the International Union for Conservation of Nature categorizes sand cats as “least concern.” In addition, about 200 sand cats live in 45 zoos around the world, so there might be a sand cat near you.

Who Is SPIDER-MAN: INTO THE SPIDER-VERSE’S Spider-Ham?