Roll the Bones With These Five Great Board Games - Nerdist

Roll the Bones With These Five Great Board Games

Just because we can’t talk about Rush’s awful departure into rap, doesn’t mean we can’t celebrate these dice chucking table top games. There’s nothing quite like throwing chunky plastic or wooden chance cubes. If you’re looking for a little bit of random chance to spice up your gaming love life, you could do much worse than the five games below.

ESCAPE: CURSE OF THE TEMPLE 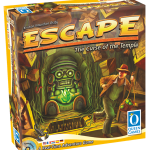 This game’s unique blend of furious dice rolling and real-time pressure is off the hook. You and several friends cooperate to place stolen gems back into a secluded temple by rolling dice and performing actions based on your result set. You can re-roll as much as you want but eventually, the beating rhythmic drum circle in the background is going to end, so you best be prepared.

That fantastic Indiana Jones theme coupled with a quick experience that is elevated with a bit of third party pressure is sublime. The fact that it’s cooperative softens the blow and removes a good amount of potential frustration. You can lean on allies for help or laugh it off and return again for another 10 minute rapid throw-down. 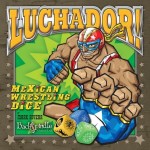 Luchador is a game you may not have heard of, which is a crying shame. This Mexican wrestling themed dice chucker has you competing head to head in the square. The game comes with a cardboard ring complete with elastic ropes that you toss the dice into. Any that fall off the mat are not counted and you can even attempt to force your opponent’s off the curtain.

This is a simple affair of trading overhand chops, chair shots, and dropkicks. It’s livened up with a dose of bravado and participants getting into their roles. Insults and trash talking are mandatory. 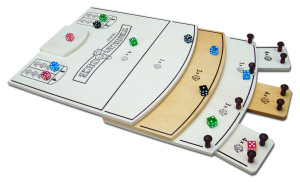 When you pull out that huge box and assemble the wooden platform, your group will pause in collective awe. Toss a die down the wedged planks and their eyes will light up as their brain connects shuffle-board with dice-rolling.

It’s addictive as players take turns tossing dice down a series of cascading wooden steps, trying to land near the bottom for big points. Multiply what you roll by the number on the step and that’s your score. If you roll too far your dice will fall off and you get nada. Oh, and you can also knock off your opponent’s rolls. Stick a knife in their back and twist away. 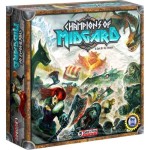 Champions of Midgard is a worker placement style game that has players taking on the role of Vikings and vying for leadership in their village. You will collect dice that represent fierce warriors and take on trolls, dragons, and even an errant Kraken if you are unlucky.

This is a meatier selection than the preceding games on this list, relying on strategy and forethought as opposed to instinct and gusto. Dice still afford a sense of drama missing from similar titles and kick this game up a large notch. This journey is totally worth braving rough waters in your Viking longboat. 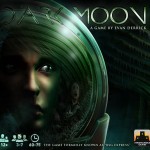 Battlestar Galactica is a popular game for good reason. However, not everyone has two or three hours to delve into a web of suspicion and lies arguing over who’s a kitchen appliance. Dark Moon smoothly enters the room boasting a 60 minute playtime and a similar level of social debauchery and backtalk.

The theme here mimics the classic film The Thing, with players isolated (on a moon base) and unable to trust one another. Dice come into the picture through the Battlestar Galactica-like crisis system where you vote with positive or negative die results you roll behind a screen. No one knows if you really rolled that poorly or if you’re pushing forth horrific results on purpose. That’s the beauty of mixing the chance cube with devious intent—opportunity for sabotage runs rampant.

Do you enjoy dice? What are some of your favorite games featuring dice? Let us know in the comments below!