Roleplay in the Mortal Realms - WARHAMMER: AGE OF SIGMAR RPG is Coming - Nerdist

Cubicle 7 relaunched Warhammer Fantasy Roleplay late last summer, but that’s not the only thing they’ve been up to when it comes to Games Workshop’s worlds. They’ve also been hard at work on an RPG for Age of Sigmar. That game’s setting, the Mortal Realms, is cool enough that you should be keeping an eye on what’s coming. Toss in that Cubicle 7 rarely messes anything up and you’ve got a recipe for something very compelling.

Why care about the Mortal Realms? If you want heroic fantasy with a grimy underbelly and a dose of the weird, it’s there. Each Mortal Realm is a nearly infinite plane of existence corresponding to a flavor of magic, from the fiery Aqshy to the ashen death realm of Shyish to the savagery of Ghur. You can do nearly anything in the Realms, alongside both old Warhammer favorites like goblins and newer groups like the Idoneth Deepkin. It’s a varied, vibrant setting, owing as much to Warhammer’s past as it does to classic RPG worlds like Planescape.

The best Age of Sigmar worldbuilding so far has been found in smaller, more intimate places than the grand battlefields of the Realms. In Warhammer Quest: Shadows Over Hammerhal, we learned what a city in the Realms looks and feels like (spoiler: it’s weird and dangerous). Shadespire revealed how omnipresent magic effects the living. Cubicle 7 clued us in today that we can expect more of that, with the RPG letting players able to play all of the major factions on the Order side of things and providing a focus on everyday life in the Realms.

The just-released cover art for the core book illustrates why this should be one of the most anticipated games of the year. You can see all the good stuff right below: sea elves, ghosts, Stormcast, flying dwarves, and tree people. Toss in Black Library authors David Guymer, Josh Reynolds, and Clint Werner, and it’s going to be a long wait til release later this year! 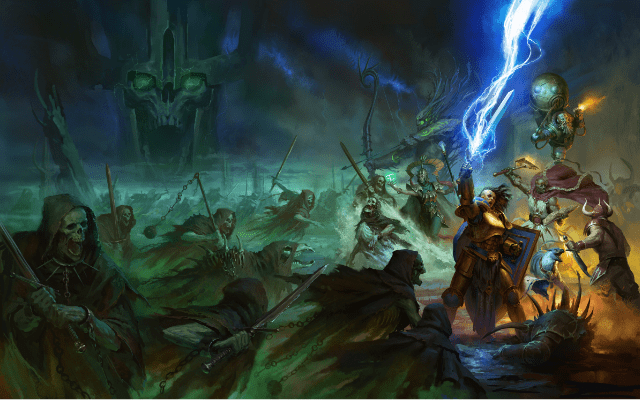 Excited for the Age of Sigmar RPG? Tell us why in the comments!