Ace Trucking Co., Flesh, and MegaCity One hit our tables for roleplaying goodness with the launch of the official Judge Dredd & The Worlds of 2000AD Kickstarter campaign. You can finally play as judge, jury, and executioner roaming the monolithic skyscrapers in Mega-City one, or play as mutant robots, cyborgs, Sov spies, or teenage tax consultants (do not underestimate the last one).

2000 AD is a weekly British science fiction comic magazine that became known for its Dredd line in the eighties, but also features a dozen other shared universes and one-shots. A cohesive stylistic approach and a shared universe with countless stories make this a perfect fit for a tabletop roleplaying game. So here’s a firsthand look at what to expect from this game. 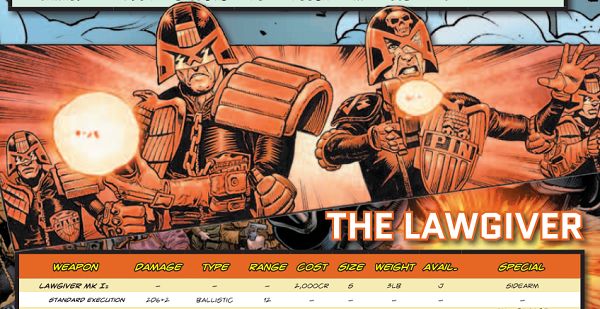 Mega-City One is a huge city-state covering much of what is not the Eastern United States after a nuclear war, and despite its Cursed Earth status, has a far greater population density than any city in present-day. Made up of City Blocks, these huge sprawling sky scrappers can be considered small cities and a citizen can quite literally live their whole lives without leaving their block. Add in some mutants, unregulated capitalism, and Block wars this is the main setting of the core rulebook.

Judge Dredd & The Worlds of 2000 AD focuses on Mega-City One and feels like an old-school eighties RPG through-and-through. It makes sense considering its powered by the What’s Old Is New ( “WOIN” ) system by EN Publishing with a few tweaks, there is a lot to love about the core book. Character creation is a modular plug-and-play based system; starting off as a young human you can choose to be a street rat for a few years, and maybe pick up a few exploits as a thief, before enrolling as a cadet in the Judge Academy and focusing on becoming a Psi-Division Judge.

The game system uses only D6 dice pools to resolve actions in a straight fashion; add in your attribute + skill + a bonus. Roll them all together and add the result. Rather than fiddle with the dice system and over-complicate things, they designers instead play with the dice pool. A young character, no matter how skilled, has their dice pool capped until they get some experience under their belt. This flows right into that Life-Path Career system. Each career or job you pick adds to your character’s age, increasing the various attributes and skills and adding special abilities to you. So it is possible to play the grizzled old-veteran cop paired up with a young rookie dispatching justice in a city block.

The core rulebook starts off immediately with expanded worlds, given you story hooks to play in any part of the universe. It’s markedly different from most RPG layouts that save alternate worlds until the end of the book, but after a full read through I see the point. Between the stats for the vehicles, the exploits, the character creation, different races, different villains and setting description storytellers need a little meat. With all the original artwork (like the one in the picture above, which I love) you’ll never run dry of inspiration as a storyteller. Even picking out your equipment can add history to a character. There’s even one-shot adventures for you to run the fourth chapter.

The layout of the entire product is sliced with original comic book art and fresh dialogue. Even examples of play with game mechanics are done in comic-story format which makes otherwise tedious to read play examples more engaging. There is hardly a page in the core book that doesn’t have easter eggs or little story hooks that allow a fresh GM to run the world.

Giving us a vibrant living setting right at the start, it casts the rest of the book in a whole new light as a viable campaign universe. The Crime Blotter section of the book that is filled with short, one-shot adventure hooks flows right into a full campaign about the old Empire State Building and neatly into stat blocks for all the foes & villains you need. One of the Kickstarter stretch goals is an online character creator and I hope they consider adding some GM tools like NPC generation. After a single read through, I could copy a handful of sheets, grab a stack of D6’s, and run a chronicle about the ABC Warriors in a war on Mars even though the true gritty details for that setting aren’t in this particular book…

Even with career paths, weapons, vehicles, and an awesome d66 method for percentile dice; we still need a campaign. The Robot Wars is a full adventure filled with glorious and awesome original artwork about the robots and their place in Mega-City One. The way they are programmed, how they think, and the rights of robots.

I for one, serve our robot overlords, so robot rights is near-and-dear to my heart.

This campaign centers on a group of Judge characters taking the lead to defend Mega-City One against the inevitable metallic revolution. Call-Me-Kenneth (the lead robot) and his army of machines dare to rise up against their human oppressors and attempt to overthrow all of Mega-City One. Bring down the law upon them for their insolence. Okay, maybe the campaign isn’t so cut-and-dry with a morality which makes for a great long-term story-line that few adventure modules present us within a 150-page adventure and source-book. That also includes tons of options and different types of robot players characters, career paths, exploits, and even flaws and glitches. What robot isn’t character isn’t the same without a malfunction or eight?

What comic-to-movie setting would you want to see come to life? Tell us in the comments!