How Do the RIVERDALE Parents Tie into the Gargoyle King? - Nerdist

How Do the RIVERDALE Parents Tie into the Gargoyle King?

by Lindsey Romain
Riverdale loves to throw audiences for a loop and this week was no exception. Showrunner Roberto Aguirre-Sacasa warned us that season three’s second episode, “Fortune and Men’s Eyes,” would have a doozy of an ending. But we weren’t ready for just how crazy it was going to be.

â€œGâ€ is for you-know-who… New #Riverdale on Wednesday, with the most shocking ending weâ€™ve ever done, and that includes FP carrying Jughead…🔥🎲☠️ pic.twitter.com/2jwnXnpEgc

As Betty and Jughead try to solve the mystery of the Gargoyle King, a mythical creature with ties to a Dungeons & Dragons-style role-playing game, we learn that the Riverdale parents actually know something about this beast. We don’t know exactly what they’re hiding, but we do know that something bad happened in their collective pasts and they’ve been covering it up for all of these years. Something that also ties into the deaths of Dilton Doiley and Ben Button, who drank cyanide-laced blue juice called Fresh Aid in service of this Gargoyle King.The Fresh Aid thing is major; when Hermione Lodge told the other parentsâ€”her husband Hiram, Fred Andrews, Alice Cooper, FP Jones, Penelope Blossom, Sierra McCoy, and Fred Kellerâ€”that Dilton’s body was found with blue lips, they went into a panic. By the sounds of things, something they did might be directly responsible for all of this. 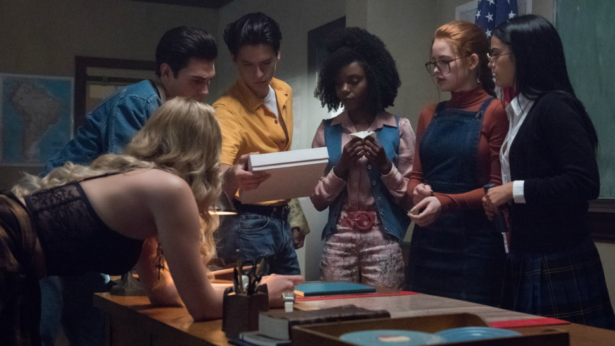 But what did they do? It’s almost impossible to speculate at this point, since we know so little about the Gargoyle King, other than what he looks likeâ€”if that was indeed who Betty and Jughead ran into in the woods: a giant, antlered, bloody-cow-faced monster. (Who bears a striking resemblance toÂ  the creature in Netflix’s The Ritual.)One thing we do know for sure: Riverdale is planning a flashback episode that will follow the parents when they were in high school. (With all of the young actors portraying their parents.) We also know what Aguirre-Sacasa told Entertainment Weekly about this episode:

“One of the things that the kids discover pretty early on is that the murder victims in the present were playing a game calledÂ Gryphons & Gargoyles, which is of course theÂ RivderdaleÂ version ofÂ Dungeons & Dragons.Â And what our kids in the present discover is that their parents, when they were in high school, were also playing this game and there was a similar murder that happened in the past.â€

The episode, titled “The Midnight Club” (a play on The Breakfast Club, no doubt) doesn’t air until November 7, so we have plenty of time to speculate who died and how exactly the Riverdale parents tie into this murder.Have any theories about the Gargoyle King? Let us know in the comments below.