We Have a Crazy Theory About RIVERDALE’s Gargoyle King - Nerdist

We Have a Crazy Theory About RIVERDALE’s Gargoyle King

Riverdale has completely given into its camp-pop gloss this season, forgoing any sense of real-world sanity that might have grounded it in season one. It is now firmly steeped in the sensational, and honestly, itâ€™s better for it; week after week, this is the most insanely fun show to dive into.

On this weekâ€™s episode, â€œThe Great Escape,â€ weâ€™re given even more insight into this seasonâ€™s big bad, which is, in true crazy Riverdale fashion, a mysterious role-playing game, Griffins & Gargoyles. (An obvious riff on Dungeons & Dragons.) People who play the game have a tendency to go mad, as evidenced by the suicides of Dilton Doiley and Ben Button and the almost-suicide of Ethel Muggs, who were all deeply invested in its machinations. The master of G&G is a wood-dwelling monster called the Gargoyle King, whom players must satiate with sacrifice. 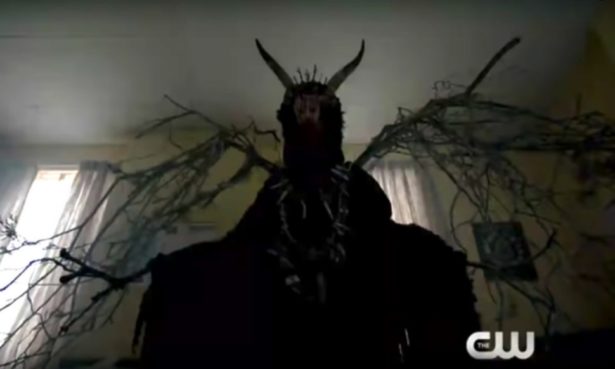 As we learn in â€œThe Great Escape,â€ this King is likely the â€œgame master,â€ or the person who started and is guiding the adventure. In G&G, these events happen in a fictional realm called Eldivare, an anagram for Riverdale, and also, seemingly, an analogue for the town. As Jughead points out, â€œThe game only exists in Riverdale. Thatâ€™s why we couldnâ€™t find it on the web.â€

We see this in action when, later in the episode, a group of the Riverdale teens, led by Veronica, break Archie out of jail. Those events play out while Jughead leads another group in a G&G adventure; what happens in the game happens in real life, with Archieâ€”who is nicknamed the â€œred paladinâ€â€”successfully escaping. This may seem convoluted, but as we learn, the seeds of G&G were planted deep in Archieâ€™s jailbreak. Warden Norton, the man who oversaw Archie and recruited him into an underground fight club, was also playing the game, and branded Archie with a G&G insignia. At the end of â€œThe Great Escape,â€ the warden drinks a cup of blue cyanide from a G&G chalice, killing himself the same way Dilton Doiley did, and in the same manner the Riverdale parents’ principal died in last weekâ€™s flashback episode.

So whatâ€™s going on and who might be involved? We have a theory that may sound totally random, but hear us out:Â What if Pop Tate is the Gargoyle King? 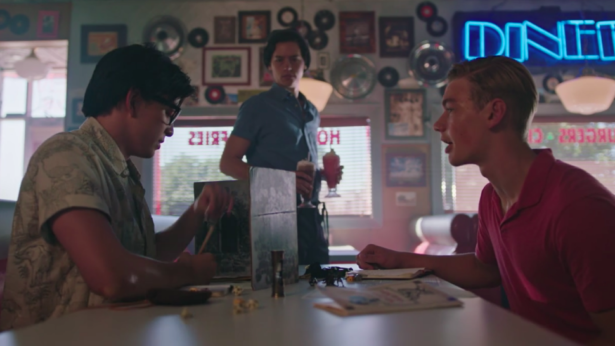 In â€œThe Great Escape,â€ Betty and Jughead theorize that whoeverâ€™s orchestrating the game has been doing it for a long time. Betty posits that it was someone from her parentsâ€™ generation, but Jughead thinks it goes back even further than that. Who do we know in Riverdale whoâ€™s been around longer than the parents?

Pop Tate, owner of Popâ€™s Diner, is a staple in Riverdale history, and the diner was definitely around when the parents were kids; we see a scene take place there in the flashback episode. Pop is a big part of our characterâ€™s lives, and always conveniently around. A lot of big moments and revelations happen in the booths of the diner.

Additionally, weâ€™ve seen that the people playing the game have visions and go slightly mad once they start playing. In the season three premiere episode, â€œLabor Day,â€ Jughead oversees Dilton and Ben playing G&G at Popâ€™s while he’s holding two milkshakes for him and Betty (handed to him directly by Pop). Three episodes later, Dilton and Ben are dead, and Betty and Jughead have both had visions of the Gargoyle King. Is Pop lacing the milkshakes with hallucinogens to bring more and more people into his deadly game?

Maybe this is bogus, but, like we said above, this is also Riverdale. Where trusted fathers are Black Hoods, the woods are full of hippie cults, and nuns perform gay conversion therapy. Even friendly neighborhood diner owners canâ€™t be ruled out.

Do you think Pop Tate could be the Gargoyle King? Or do you have another theory? Let us know below!