We’ve know for while now that RiverdaleÂ was planning to take us back to the parents’ high school days, with the teen cast stepping in to play their characters’ moms and dads. The highly anticipated episode, “The Midnight Club,” finally aired this week and it did not disappoint! In addition to the sheer joy that comes from seeing K.J. Apa doing his best Luke Perry impression, Lili Reinhart in Alice Cooper bad girl mode, and Cole Sprouse looking exceptionally Billy Loomis-esque with his white t-shirts and slicked-back hair, the episode was also chocked full of juicy plot elements. We finally learned what happened the night a game of Gryphons & Gargoyles went awry: the Riverdale parents got high on drugs after sneaking into the school for a round of the role-playing game, and their principal wound up dead after drinking poison from the game’s prop chalice. The group vowed to never tell a soul what really happened that night, and have carried their secrets into the present day.There’s a lot going on in “The Midnight Club,” but it manages to be a total ball on top of all that storytelling. Even better, the 1992-set episode is also loaded with ’80s and ’90s pop culture references that’ll send viewers into a tizzy. Here’s all of the nostalgic Easter Eggs we found in the episode.

The Saved By the Bell-looking logo.

via GIPHYThe episode opens with a trademark Riverdale title card, but this time it has a retro look. The Saved by the Bell comparisons invite themselves. Also fun: The music is the traditional Riverdale intro theme reworked to fit the early ’90s setting.

The Midnight Club = The Breakfast Club

“It was supposed to be one Saturday…” #Riverdale is new TONIGHT at 8/7c on The CW! Stream free tomorrow only on The CW App. pic.twitter.com/QKeK8GJ8cw

We learn that Alice, F.P., Sierra, Fred, Penelope, and Hermione were forced to spend a Saturday in detention together, which is how they first got involved in Gryphons & Gargoyles. That’s the same set-up for John Hughes’ classic 1985 high school film, The Breakfast Club. The marketing for the episode leaned hard into this reference, with a poster that emulates the famous design of the ’80s film version. 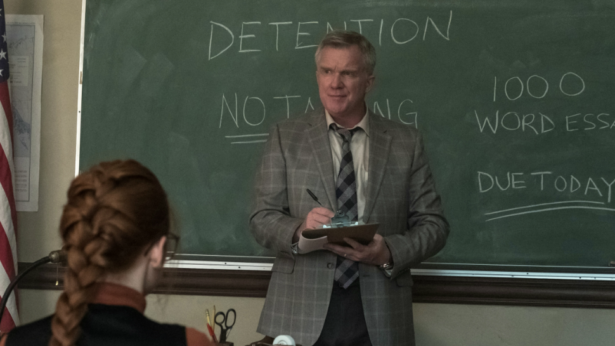 If the episode’s name didn’t give it away, Riverdale worked in an even bigger Breakfast Club reference in the form of Principal Featherhead, played by Anthony Michael Hall. Fans of the Hughes film will instantly recognize Hall, who played Brian Johnson, a.k.a. “the Geek,” in that film.

Early in the episode, Penelope Blossom mentions that distinct social groups shouldn’t intermingle, and when no one reacts to her statement, she asks, “Hasn’t anyone seen Heathers?” AÂ totally appropriate reference, givenÂ Heathers‘ irreverent take onÂ school hierarchies and feuding social groups. Alice also mentions during a voiceover, when describing the era, that “Winona still had her Johnny,” referring to Ryder’s famous romance with herÂ Edward ScissorhandsÂ co-star Johnny Depp. 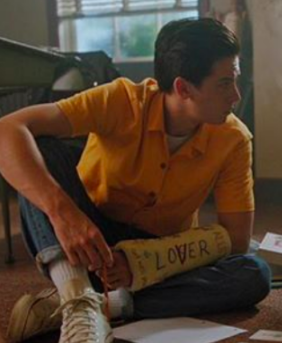 Okay, this isn’t technically from an ’80s movie, but it’s from a movie set in the ’80s. We learn that F.P. Jones was abused by his alcoholic father in the past, and one altercation put F.P. in an arm cast. We later see the cast fully exposed, and it bears the same “Lover/Loser” scrawl that also appear on Eddie’s arm cast in 2017’s horror hit It,Â which takes place in 1988.

At one point, an adult Alice (MÃ¤dchen Amick) refers to F.P. as the “BMOC,” which is short for “big man on campus.” That phrase, which refers to a school’s head honcho cool dude, was used decades before this episode is set, but there was a 1989 film called Big Man on Campus (starring Allan Katz) that re-popularized the saying.

Music plays a huge role in “The Midnight Club,” with songs by Billy Idol, Tears for Fears, and David Bowie peppering the soundtrack. But one of the most direct ’80s references in the episode comes from The Fred Heads, Fred Andrews’ band, who sing “Dream Warriors.” This was a song by Dokken, who recorded it for the 1987 film A Nightmare on Elm Street 3: Dream Warriors. The CW released a music video for the song ahead of the episode. 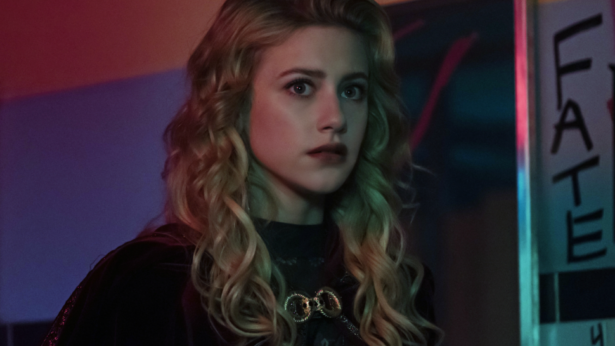 MÃ¤dchen Amick, who plays adult Alice Cooper, famously portrayed Shelly Johnson in David Lynch’s seminal ’90s TV series Twin Peaks. To step into her TV mom’s shoes, Lili Reinhart referred to Shelly’s look from that series to replicate a ’90s-era Alice.Â â€œI do my own makeup on the show this season, and I was definitely looking a lot ofÂ Twin PeaksÂ photo references to make sure that I got the eyebrows right,â€ Reinhart told Vulture earlier this year. “The Mac lip pencil Spice I use, she used back in the day. So, yeah, I did my research!â€Those are all of the major references we caught this episode, but did you spot anything we might have missed? Let us know in the comments below!