Risking Life and Limb with Severed

First-person exploration adventures are often full-bodied gaming experiences, giving you the perspective of the player while—at the same time—providing unique experiences when it comes to puzzle-solving and occasional combat. Myst obviously paved the way years ago, but more recent titles like Legend of Grimrock and Dear Esther have offered more defining examples in the genre.

Soon, Drinkbox Studios—developer of the Metroidvania­-style action game Guacamelee!—will enter the genre with its forthcoming PS Vita game Severed. It combines the thrill of first-person exploration with the combat style of Infinity Blade, only instead of battling heavily armored enemies, you’ll be chopping off the limbs of your enemies. Hence the name Severed.

The game follows in the shoes of a one-armed heroine who finds herself in quite a predicament, needing to find out what happened to her family while simultaneously facing off against a sinister force that are seeking her spiritual sword. What follows is a game that utilizes the exploration effort of previous games, but also introduces combat scenarios where timing is everything.

When it comes to taking a look around the vibrant, colorful (yet danger-filled) world that DrinkBox has created, it’s a matter of simply moving onward through levels, finding new rooms with items to collect, and enemies to face. It’s all done in a cut-frame style, but with added 3D movement to create a surreal, yet familiar, experience to fans of the genre.

As for the combat? That’s something else entirely. When an enemy first appears, he (or she) will have the ability to guard against most general attacks, which are executed with finger swipes on the PS Vita touch screen. When it appears that the enemy is about to attack though, the player can react by swiping in the direction of the limb, deflecting it, and leaving them open to a few quick swipes. 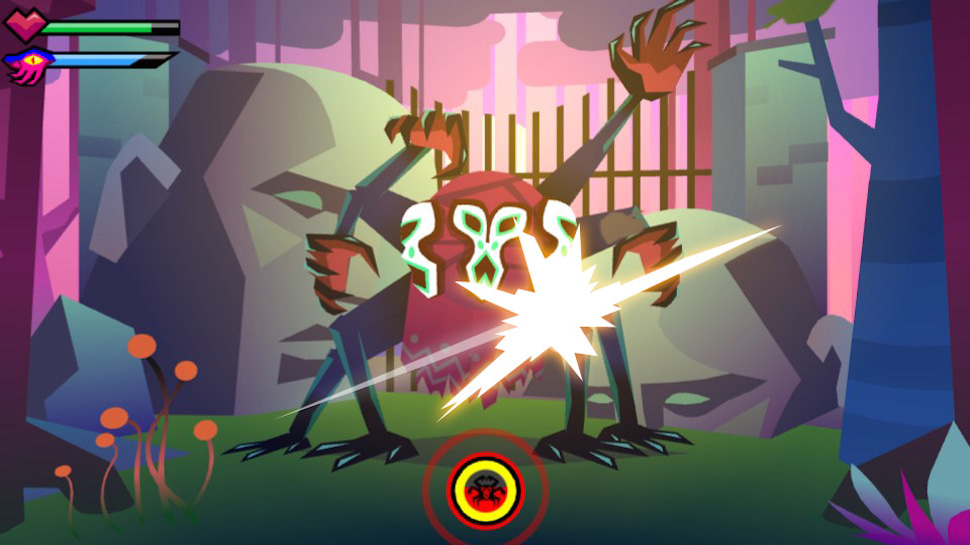 Eventually, once the enemy is worn down enough, the player will be able to finish them off by cutting off their limbs and moving on to the next section of the game—where more challenging enemies await. These range from a sinister eye hiding out amidst a field of glass shards to large colorful beasts (including a purple thing that resembles an evil Grimace from McDonald’s) that require a great deal of damage to bring down.

Your character can evolve over the course of Severed, too, as you have the ability to pick up additional items that can be used—including new upgrades that can be custom built to assist you in battling stronger foes. That helps when you need to face more than one enemy at a time, changing directions quickly to strike at them before they have a chance to hit you.

As you can see from the screen shots, the art style is superb, and on the same level as DrinkBox’s previously released Guacamelee!, with a nod to classic culture. The music is pretty similarly matched, too, mirroring the ambient tone of the surroundings and kicking things up a notch once the battles begin.

The developers are still hard at work on Severed, but there’s a real possibility we’ll see it released later this year. It’s definitely a title worth waiting for—especially if you were one of those players that just couldn’t get enough of the first-person adventure games of old.

Looking forward to Severed? Let us hear it in the comments.