As the masters of magic in Rokugan, the Phoenix Clan are dedicated to peace and harmony, with little interest in warfare. They teach the Tao, work to preserve the harmony between the clans and kami, and maintain the shrines throughout the Empire. Far from weak, they wield immense power. When roused, they will defend themselves and their way of life to the death.

Disciples of the Void is the first clan pack from Fantasy Flight Games for Legend of the Five Rings LCG and it focuses mainly on the Phoenix Clan. If you play another clan, don’t despair, there are new characters for you as well (except the Scorpion) as well as a few unaligned spirits and spells. There are multiple copies of all the cards that you can have extras in your deck, so you don’t need to buy more than one pack to get everything you want. You will still have to do a bit of deckbuilding because there aren’t enough cards to have a full deck while having too many characters in the conflict deck, but I fully expected to do a bit of tinkering. 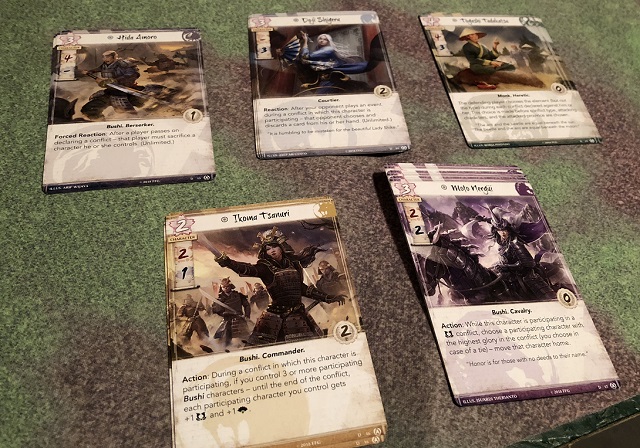 The first thing I did was swap out my core set Stronghold for the new Kyuden Isawa because there were a bunch of new spells to play with and the ability to play them out of my discard pile was too tempting. The loss of 1 strength of the province stung a bit, but I found the ability to be very worth it. I also swapped out an unaligned province card for the new Sanpuku Seido. It’s a fairly week province (1 strength), but the fact that it forces your opponent to use their glory instead of military or political skill seemed interesting. 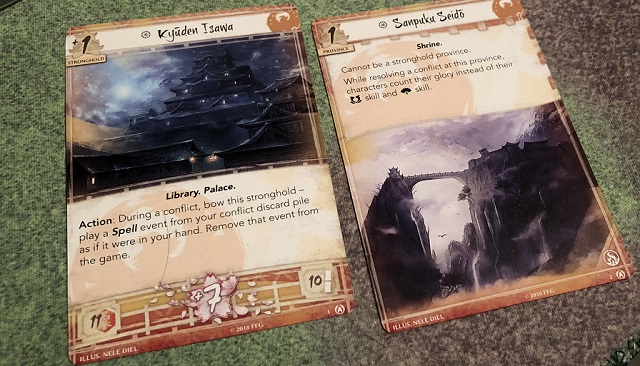 I sat down across from the Scorpion Clan and we got down to business. I noticed right off the bat that Phoenix felt very different from all the other decks I’ve played. There was a lot more paying attention to what ring was being used and having to hold back fate to buy spells. I wasn’t thinking in the first few rounds and didn’t hold back enough fate nor did I bid aggressive enough to cycle new spells into my hand, but that is completely a failing on my part, not the cards.

Once I got the hang of using shugenja and spells, that’s when the deck started working. Sanpuku Seido really tripped up my opponent when it came into play because his deck was very low glory and I could easily hold him at bay. Pacifist Philosopher very much played to the clan because I gained fate for passing on conflict (which I totally used to power my spells when the Scorpion attacked me). I spent most of the end of the game manipulating the elemental ring in play (and switching out my claimed rings), which is a very Phoenix thing to do as they are Elemental masters.

Spells are a huge focus in this pack, which is to be expected. A lot of the characters have abilities tied to using spells, playing very much into the lore of the Phoenix Clan. Warriors and priests live and fight side by side, acknowledging the strengths and bolstering the weaknesses of each other. Following the wisdom of the Kami, the clan’s members serve as the spiritual advisers and protectors of the secrets of the Tao.

One of the things I love about Legend of the Five Rings is all of the lore that goes into the game. Inside the clan pack, there is also the first chapter of a novella about the Phoenix. Characters and places in the novella also happen to appear in the clan pack. Having read the first chapter, it gives me a little more insight into the places I have in my deck, as well as some of the characters. It’s great to see the game come to life in stories and be able to tell my own.

I need to come clean: I did not rise to the glory of the Phoenix Clan. The Scorpion broke through my stronghold and defeated me in battle. It took me too long to get out of the mindset of another clan and into the correct one for the game. By the time I figured out the power of my deck, it was too late. But, like the mighty Phoenix, I will rise from the ashes and build again.

What clan pack are you most excited to see? Show me your clan love in the comments!