Spoiler alert!  This article reveals major plot points that happen in the Game of Thrones series so if you have not read nor watched it (which you definitely should!), reader beware.

A Game of Thrones: The Card Game Second Edition is the newest iteration of the Living Card Game by Fantasy Flight. The game sports eight of the world’s most memorable factions: including the noble and honorable Starks, the beautiful and sadistic Lannisters, and the tenacious and implacable Night’s Watch. Each house has a set of loyal and non-loyal cards. When deckbuilding, you are only allowed to use cards loyal to your chosen house, however you can modify your deck by adding in an agenda. Banner agendas allow you to add in the non-loyal cards of another House, while the fealty agenda makes running a single House more cost effective. For instance you could see what it would be like if Daenerys Targaryen and her dragons came to aid the Wall, or if Theon never betrayed the Starks and brought with him the power of the Greyjoys. 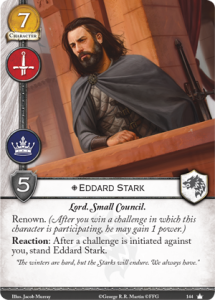 To claim victory over your opponent, you must be the first to gain fifteen power tokens by defeating them in challenges, skirting their defenses unopposed, and claiming dominion over the kingdom by having the largest standing army. There are three types of challenges: Military, Intrigue, and Power. Winning a Military challenge kills off your opponent’s characters, while Intrigue makes them discard cards from their hand, and Power allows you to steal power tokens from their clutches. Each character has icons to represent what types of challenges they can participate in as well as a strength score to indicate how powerful they are. For instance Cersei Lannister is great at playing the game of thrones and creating plots within plots, but isn’t very good at swinging a sword, so while lacking the Military icon, she wields, quite deftly, the Intrigue and Power icons. Eddard Stark on the other hand is a seasoned combat veteran and highly respected member of House Stark, but loathes the games played by those in power, thus he lacks the Intrigue icon but stands firm with a Military and Power icon.

When a player declares a challenge, they will announce which of the three they will be initiating and select any number of their characters (as long as they have the relevant icon) to participate. The defending player will then get a chance to throw in their own characters to try and repel the attack. The side with the higher strength total wins. 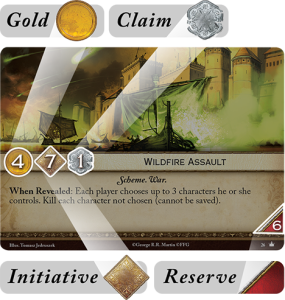 When a character is used to attack or defend it is knelt (turned 90 degrees) and cannot be used to further attack or defend for the rest of the round. It is therefore paramount that each player choose the characters they use wisely. Do you go all out with attacks and leave yourself vulnerable to your opponents retort, or do you hold back so you have a line of defense.

Each challenge phase is made unique by the plot card. Players will craft a deck of seven plot cards along with their deck of sixty player cards to start the game. The plot cards determine how much gold you will receive to play cards, an initiative to see who plays first, a claim value to determine the power of your challenges, and a reserve value (max hand size) for the round. The plot will also have a special ability that will provide a twist for the round, such as ‘The Game of Thrones’ plot card which makes it so that in order to declare a Military or Power challenge, a player must win an Intrigue challenge first. This plot card goes well with the Lannisters and the Tyrells as both of these Houses are infamous for their political intrigue. 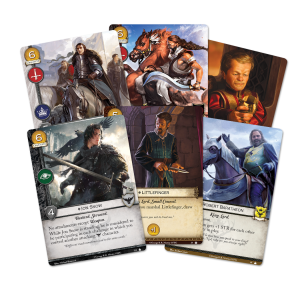 A Game of Thrones: The Card Game Second Edition delivers in bloody heads on spikes when it comes creating the feeling of the series. The houses are flavorful and play very differently; the Lannisters are cunning, devious, and fabulously wealthy, while the Starks are no nonsense and straightforward with some very powerful characters. The Targaryens will burn you down and the Night’s Watch will sit on their Wall, repelling attacks left and right. To enjoy the full experience of deckbuilding, you’ll have to shell out the cash for three core sets. That’s not to say that one core set doesn’t provide hours of fun and entertainment, it’s just that you will definitely want to invest more in this game when you play it. It’s that good.