RESIDENT EVIL 2: THE BOARD GAME Faithfully Embodies The Video Game

As a longtime fan of the survival horror genre and the Resident Evil games in particular, I was thrilled to learn that there would be an adaptation coming to tabletop. The Resident Evil brand has changed over the years from slow-moving thematic gameplay, and some cringe-worthy dialog to a more action focused series of games.

Twenty years after the release of Resident Evil 2, the team over at Steamforged Games is bringing this beloved title to a tactical board game. But how could, what is basically a board game dungeon crawler, capture that same claustrophobia and sense of dread that kept fans of the series coming back? While we had a chance to get our hands on a pre-production version of the game last year, I had a chance to sit down at Gen Con 2018 with the lead designer Sherman Matthews to answer that exact question with the final version of the game. Spoiler alert, it’s pretty good.

Residient Evil 2: The Board Game is a cooperative tabletop game of survival horror for 1 to 4 players. You play as one of the characters from the game, Leon Kennedy, Claire Redfield, Ada Wong or even Robert Kendo who we last saw being eaten alive by zombies. It would seem that Kendo is more resilient than previously thought. 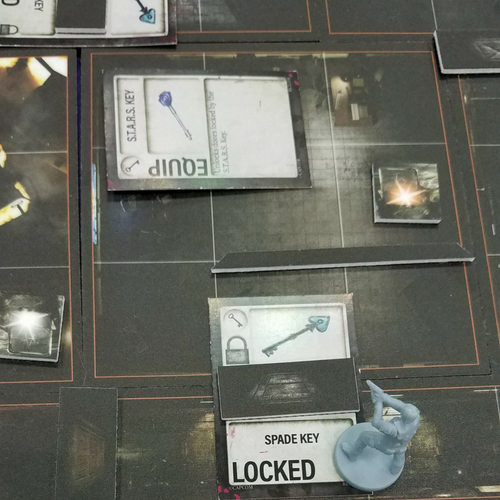 Matthews’ love of the source material shows from the moment you sit down at the game. The characters have a heartbeat meter for a health bar, your inventory spaces are limited, and how you interact with the environment and other players all just felt right. We played a prototype of the second scenario, The S.T.A.R.S Office at the Raccoon City Police Department. Our objective was to safely make it to the S.T.A.R.S. office on the second floor, but first we needed to split up and find the correct key to open the locked door.  Although, many of the puzzle elements of the Resident Evil series didn’t make it into the final cut of the board game, many of these ‘find one item to unlock an area to find another item’ did. It works, and is immediately familiar.

Knowing full well that they had two major audiences to please, veteran tabletop gamers and fans of the video game series, Steamforged approached the design of Resident Evil 2: The Board Game very deliberately. They wanted it to be intuitive for newcomers, but not boring for more experienced players. To do this, the game’s mechanics roll out several scenarios, increasing the game’s complexity without being overly intimidating. 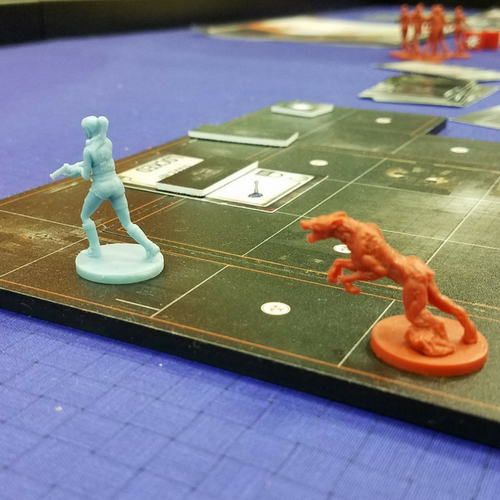 Each player has 4 actions on their turn that they can use to move a space, attack, and search. Opening doors also costs an action but so does closing it behind you. This action economy becomes incredibly important as you find yourself needing to decide between fighting a zombie and trying to escape from the room. The undead on the board will only activate if they are in the same tile as a player or if doors are left open between them and a player’s character. Therefore, leaving some doors open can make it easier to backtrack when needed but it can also come back to bite you.

Actions that involve players interacting with zombies, either to avoid or attack them use the game’s dice. And these are some unforgiving dice. Each board space can fit four regular sized models in it. Some enemy models have larger bases and this scenario definitely has one of those. But typically you’ll find yourself in a space with one regular zombie. To avoid a single zombie is a fairly simple task, with the exception of Kendo all other characters roll 2 dice to avoid. Each dice has 3 dodge results, but they are contingent on the number of zombies you are trying to avoid. If you find yourself in the same space as 2 zombies your successful results reduce from 3 die faces to 2. Dodging means your move action succeeds and you can continue on your way. Failure means that you take some damage, but you’ll be able to shove one of the zombies to an adjacent space allowing for your next attempt to be easier. 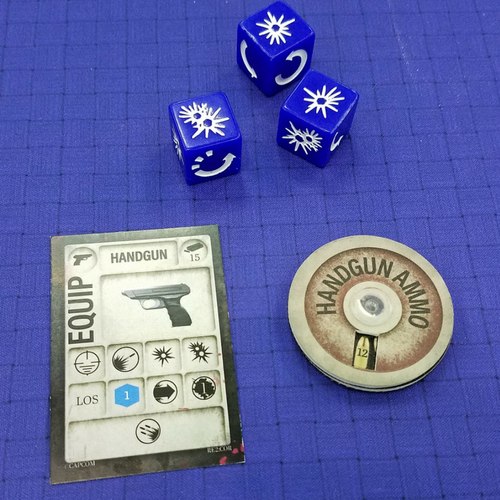 Combat is similarly stressful as your ammunition is at a premium. Each shot with your pistol rolls one die and you can fire up to three bullets in a single attack. Much like avoiding, attacking has varying levels of success. Most likely you’ll just push  basic zombies back a space, but if you’re lucky one of these shots will strike true and kill it. Firing your weapons in a room full of zombies will also attract unwanted attention and your desire to dish out some punishment may find you suddenly cornered.

After each player’s turn, they will draw from the Tension Deck to reveal an all clear or some horrible event taking place that the players will need to deal with. The deck of Tension cards acts as a timer in some scenarios as the player will lose if the deck runs out. Fans of the series will recognize the art on the back of these cards as the iconic opening door image that separated rooms keeping players on edge not knowing what they would find. Each of these cards comes with some atmospheric flavor text (that I encourage everyone to read in their creepiest voice) and the more severe ones will spawn zombies or create lingering effects. 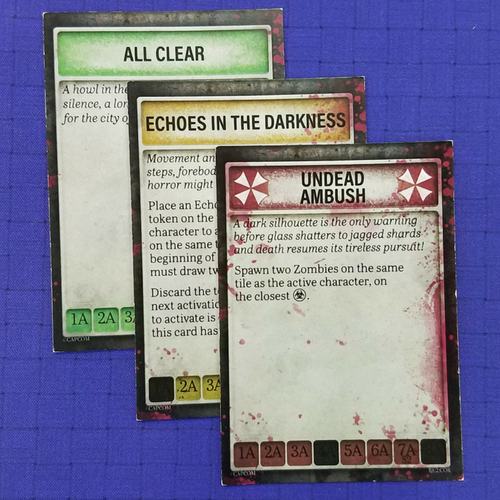 Ultimately Resident Evil 2: The Board Game gave me everything I had hoped for as a fan of the series. The low key sense of dread was present from the first turn as I stared down a narrow hallway at a pair of zombies. The decision points of do I fight this zombie or do I try to run past it harkened straight back to the source material. Playing solo for the traditional feel or teaming up with others was just as enjoyable and the boss fights break up the standard game with exciting new challenges.

The game comes with eight scenarios to start but with expansions, there will be more than 20. Not to mention the loads of additional characters and enemies you’ll be able to add to your games including a really neat retro pack that replaces the art on the game components with the classic imagery from the video game.

Steamforged Games launched the Resident Evil 2: The Board Game Kickstarter nearly a year ago and backers should be getting their copies in the next month or so with a wider release in early 2019.

What video game do you hope to get adapted for the tabletop? Tell us in the comments below!