Red Velvet Cinnamon Roll Guts Will Fill You Up with Deliciousness

Morning breakfast shouldnâ€™t be disgusting, unless itâ€™s Halloween time then all bets are off. Chris Rachael of Kitchen Overlord has taken sweet, gooey cinnamon rolls to a whole new level of grossness by turning them into Red Velvet Cinnamon Roll Guts, and itâ€™s delightfully spooky.Itâ€™s one of those things that you know itâ€™s tasty but something about the intestine-like realism is almost too much for your eyes to communicate to your stomach. Is it the twists and turns of the faux-innards thatâ€™s too much, or perhaps the oozy, slime-like glaze that finishes it off? Itâ€™s hard to say. 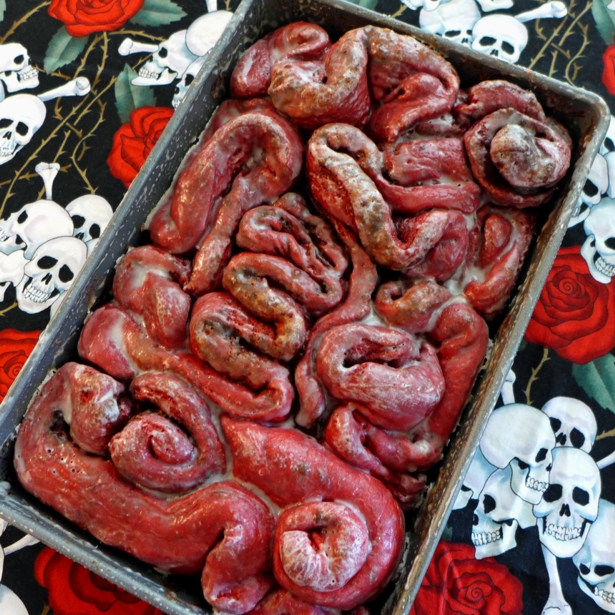 The concept is simple, regular cinnamon rolls are imbued with a red velvet hue but arenâ€™t sliced, instead the dough is unrolled and laid into a pan in a ghastly manner. Who knew that something so delicious could become absolutely vile. When theyâ€™re baked they puff up even more, rising up like a bloated mass of sickeningly sweet internal organs. Ah, dessert. Thereâ€™s nothing quite like it.These Red Velvet Cinnamon Roll Guts would be a fabulous addition to the dessert table at your Halloween party. Imagining the guests carving into the pan for a bite is almost too much.If youâ€™re looking for more gore-met Halloween eats, Kitchen Overlord offers up over 69 (Editor’s note: nice) bloody awesome recipes in her Dead Delicious Horror Cookbook. Even more terrifying, a few of the recipes are Paleo, Gluten-Free, and Vegan. Itâ€™s enough to send a shiver down your spine.Get the full recipe for Red Velvet Cinnamon Roll Guts on kitchenoverlord.com.Would you be able to stomach cinnamon roll guts for Halloween? Let us know in the comments and tag @nerdist and @justjennrecipes on instagram to show us your spookiest Halloween treats!

Get further into Halloween with our discussion of Halloween!

Get a Taste of Halloween with This Monster Cereal Tiki Milks...

The Worlds of STAR WARS and More as Architectural Renderings

Craft Your Own Pokémon Pompoms with This DIY Book