Red Hood and the Outlaws is one of the few DC Comics from the original New 52 launch that is still around. Batman’s second Robin, Jason Todd, has had a pretty extensive arc. He sought redemption to right past wrongs after a villainous turn following his famous resurrection. But over the summer, original writer Scott Lobdell stepped away from the project, wrapping his run at #50. In Red Hood #51, Todd no longer has the Outlaws as his family or Artemis as his girlfriend. He has a new story, a new creative team, and a two-part final arc for the character before DC’s Future State event drops. 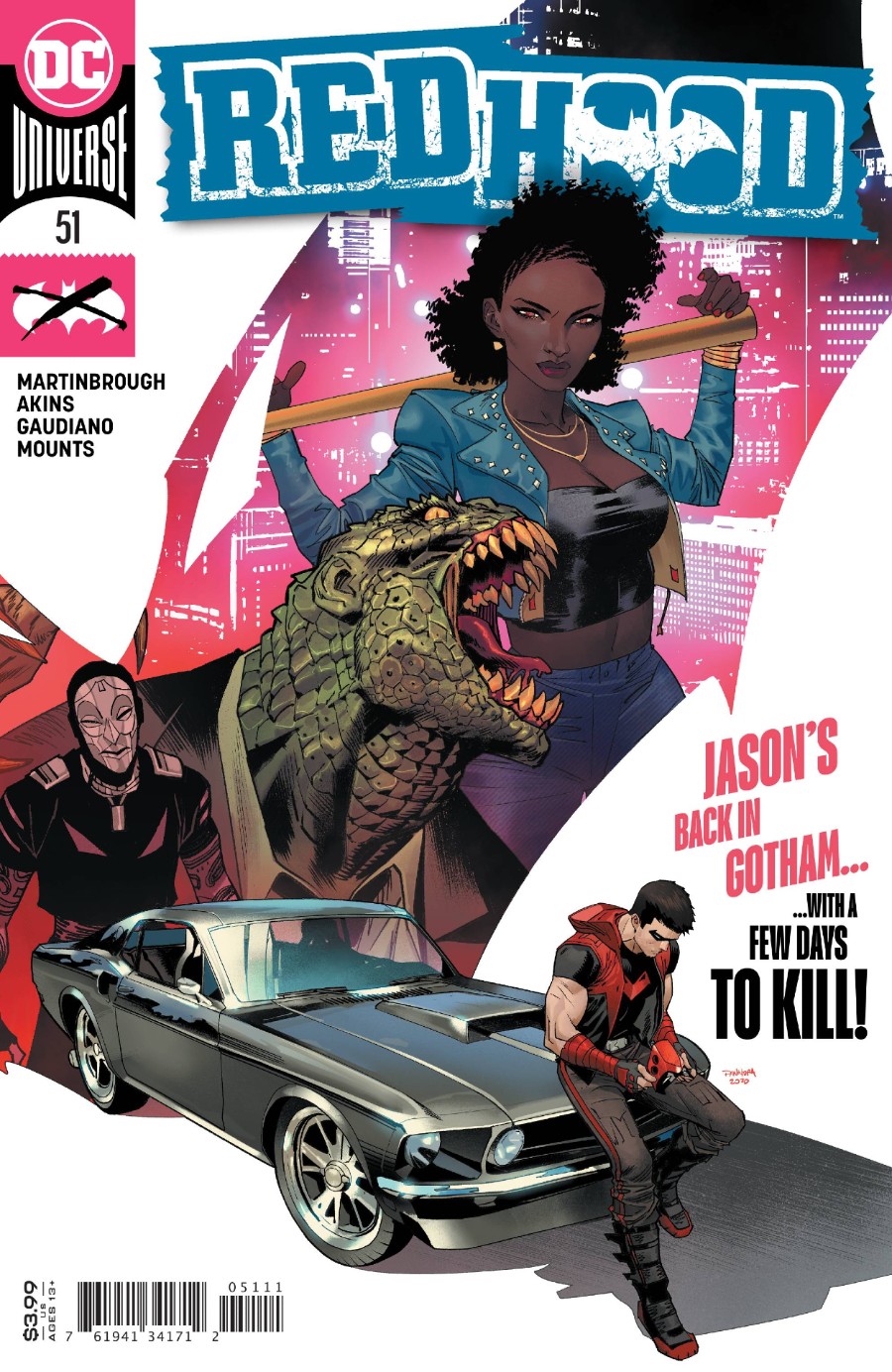 Writer Shawn Martinbrough (Thief of Thieves, Prométhée 13:13) and artist Tony Akins (Wonder Woman, Manifest) bring Todd back to Gotham for a little R&R in Red Hood #51 post-Joker War. While the caped crusaders were off trying to keep the Joker’s Lieutenants from blowing the city off the map, the Hill section of Gotham had to fend for itself. The Watch, a group of neighborhood vigilantes led by the new blue-clad Strike, have come together to defend the hood from terrorists and a new breed of gentrification-funded villains. It’s old baddies vs. new with the neighborhood caught the middle—and the Hill is fighting back.

Todd is trying to find his footing in a neighborhood he no longer recognizes. So newer characters get more panel time in this issue. “After everything Jason has been through, it seemed important to just let the character ‘breathe’ and experience what he might have been missing all of these decades,” Martinbrough said.

Dana Harlowe, an old friend of Todd’s and a new character, was looking after his secret Hill apartment. (If you squint, you will see the family resemblance to her newscaster sister Denise from the opening pages.) She catches Todd up on everything that has happened in the Hill in the past twelve years. 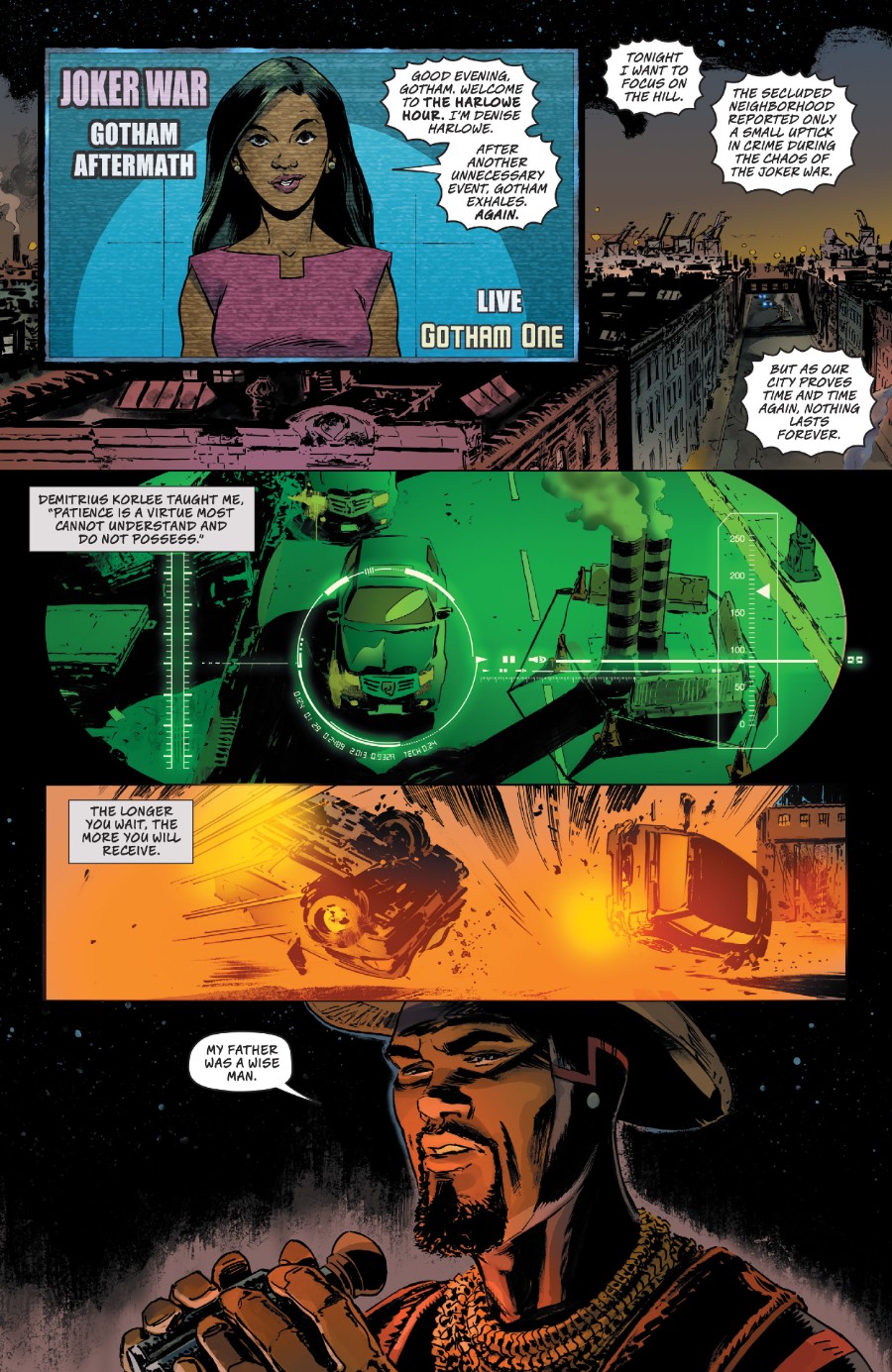 Originally asked to illustrate this mini-arc, Martinbrough was too busy to draw due to his prior commitment to The Heavy (Abrams). Offering to write instead, DC Comics Editor Ben Abernathy agreed to let him pitch. “We had a hilarious hour-long phone call where Ben got me up to speed on the past 50 issues of the Red Hood and the major events in Jason’s life,” Martinbrough’s said. “After seeing how strained Jason’s relationship has been with Bruce in the animated films, I developed a good angle for the story.”

There is history here. Martinbrough happens to be the first African-American to draw an ongoing Detective Comics run ( starting with #742 with Greg Rucka). He was also the artist on the Batman: The Hill (2000) one-shot where the neighborhood was first created by writer Christopher Priest 20 years ago.

If Gotham is DC’s version of New York City, then “The Hill” is its version of Harlem. But unlike Nightwing’s “Bludhaven” or Batgirl’s “Burnside,” Red Hood #51 is only the second time The Hill neighborhood or its characters have been seen in the comics. “Tony Akins and I reimagined what The Hill would be twenty years later as prime Gotham real estate. All this created an interesting new ecosystem to drop Jason Todd into,” Martinbrough said. “New character Demetrius Korlee Jr. is the son of the criminal figure Demetrius Karlee, who was the main nemesis in the original story.” 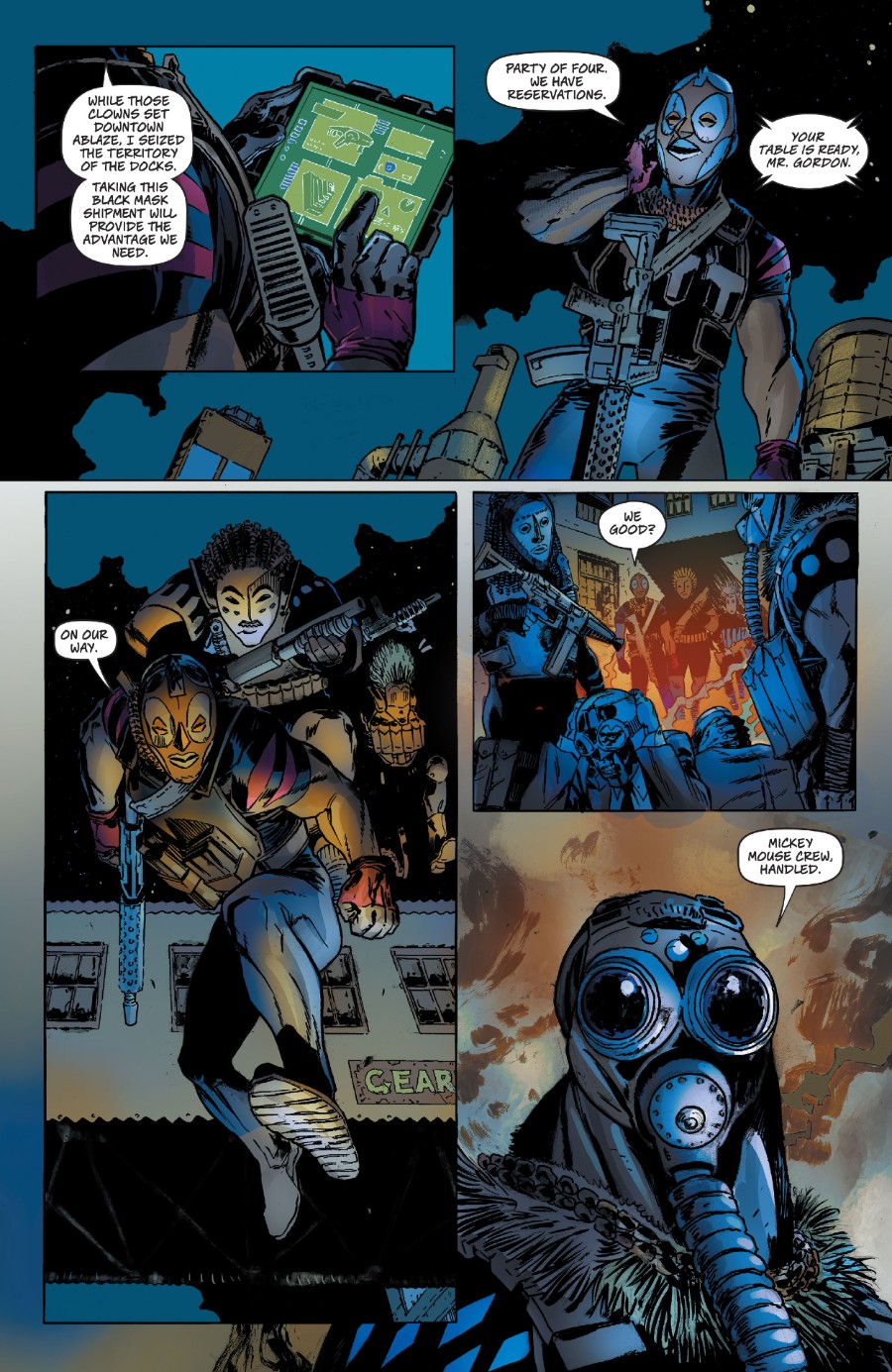 Sartorial supervillain Thomas Misell is another big baddie in this arc. By day, a streetwear designer, Misell, is what you get if Supreme and Off-White created a villains line and their top tailor exploded people in his off-hours.

The other cameo that will make fans happy is Killer Croc. (In a bespoke SUIT no less!) But the reptilian villain wasn’t Martinbrough’s first choice. “Initially, I pitched Clayface for this story. However, in current Batman continuity, Clayface is living life on the straight and narrow. So Abernathy suggested using Killer Croc,” Martinbrough said. ”Getting Killer Croc out of Arkham Asylum…would allow the character to be available for Future State or any future DCU storylines.”

Bringing on Martinbrough as a writer meant finding a new artist. Over the summer, Abernathy reached out to illustrator Tony Akins, who agreed to come on board. “I liked what Abernathy told me about Shawn’s direction for the two issues: new characters of color and to get Mr. Todd back to street level action in Gotham City,” Akins said. 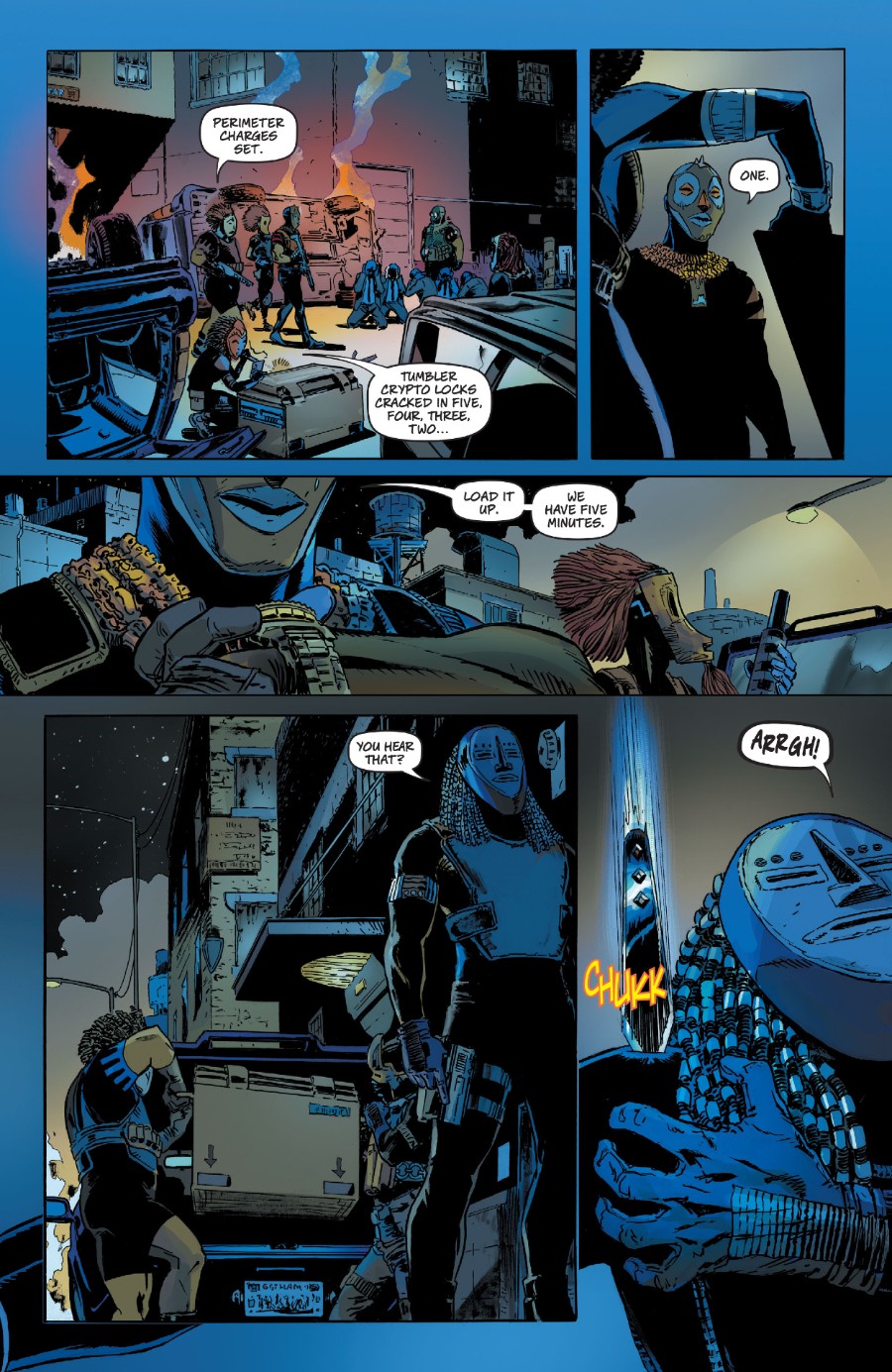 “Mr. Todd” actually gets so many panels as a civilian in this issue you almost forget that he’s a vigilante himself. (Only one page features him in full Red Hood regalia.) Akins’ realistic and practical approach to the Watch and “Korlee crew” designs is also refreshing. A cobbled-together mix of football, hockey, and firemen’s gear, plus a few museum masks thrown in for effect. It’s a believable look at what a neighborhood squad defending themselves against villains would look like.

Getting two artists to agree on the layout can be tricky, and this new team is no exception.“We bumped heads constantly,” Akins said. “I had a strong sense that staying directly on script would keep the process rolling smoothly.” Growing pains aside, the team definitely felt that they ended up with some strong work that fans will enjoy, including a few Easter eggs and callbacks.

“There’s a nod to the classic GIJOE : Silent Interlude issue by writer/artist Larry Hama and inker Steve Leialoha in the first issue,” Martinbrough said. “Tony, inker Stefano Guadiana, letterer Troy Peteri and colorist Paul Mounts did their thing and they all killed it.” Akins’ favorite panel can be found on Page 19 of the first issue. “There’s a pole-dancer with a hornpipe clenched in her teeth. [I gave her] a scar, and when Shawn asked whether it was a knife wound or a bad C-section, my reply was, ‘It’s Gotham City: two-for-one.’”

Red Hood #51 does find Todd being a bit judgmental of other vigilantes, though. Especially when he and Dana chat about who is best-suited to defend civilians. Is Todd the Batman of this story? “Ha! After 50 issues of the Red Hood bringing criminals to justice, seeing others pursuing this path of vigilantism is a bit of a revelation for Jason.” Martinbrough agrees.”Observing these actions, no matter how justified, may give Jason a bit of insight into Bruce Wayne’s perspective after all of these years.” 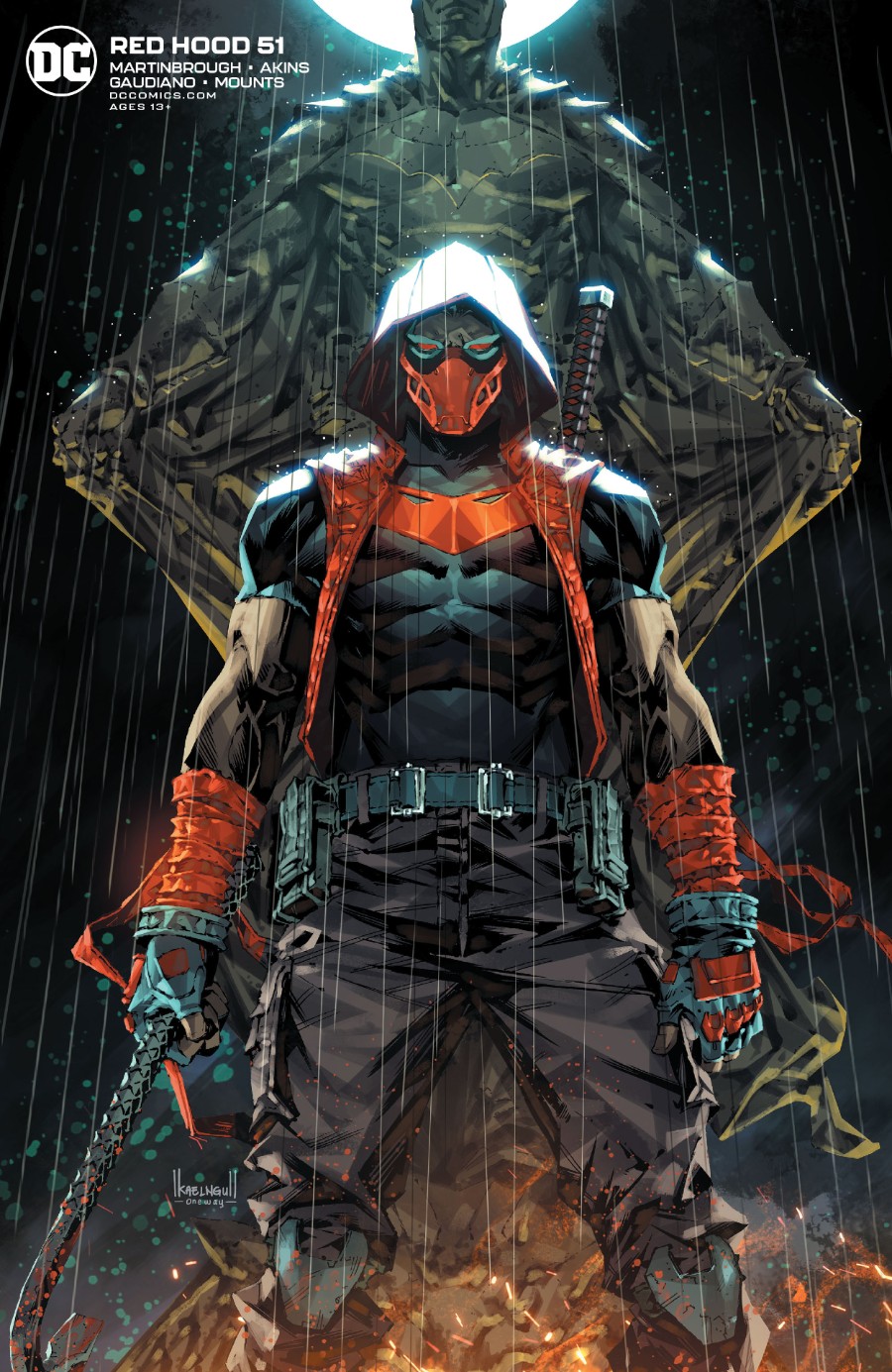 The ensemble feeling of Red Hood #51 allows Jason Todd to be more of a good guy. And dare I say “happy” and less “broody and batty” than previous issues, which is a good look for the character. And although Martinbrough, Akins, Gaudiano and Mounts all built a strong foundation for a new team for the Red Hood, sadly, that is not the case. “Red Hood won’t be joining Strike and her team of vigilantes. Strike and her team serve as a mirror for Jason to see vigilantism from a distance. Whether or not the readers will see more of Strike and company in the future is up to the powers that be at DC Comics.”