After years of anticipation, Rockstar Games’ Red Dead Redemption 2 is riding out to consoles on October 26. But in the lead up to one of this year’s biggest releases, some of the most heated topics of conversation are the video game industry’s infamous “crunch time” and horse testicles. Yes, that’s right. Horse testicles. How could these topics possibly be related? Today’s Nerdist News is circling the wagons to bring you the answers![brightcove video_id=”5850068795001″ brightcove_account_id=”3653334524001″ brightcove_player_id=”rJs2ZD8x”]Join the outlaw Jessica Chobot as she walks us through the recent remarks made by Rockstar’s co-founder Dan Houser, who also served as a lead writer on Red Dead Redemption 2. While speaking with Vulture, Houser indicated that some members of the team had been putting in 100 hour weeks to get the game finished on time. Considering that’s over twice a normal work week, even casual fans were taken aback by the idea of forcing employees to suffer through that ordeal for a game. 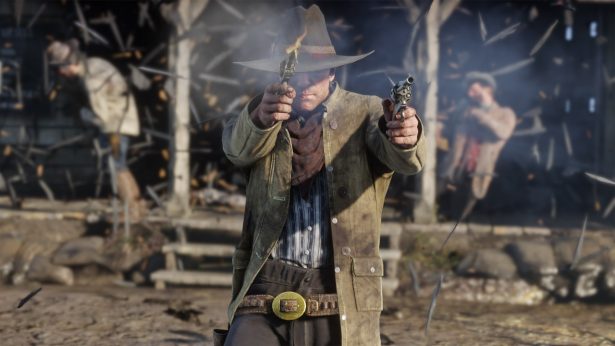 Adding to Rockstar’s misfortune was the odd reveal that the game’s programmers had even thought to include horse testicles that will change size depending on the heat or the cold of the weather. That bit of info was used as a way to further roast Rockstar’s apparent disregard for their employees’ health.

The dude that programmed the balls from the horses in Red Dead Depeption 2 gonna be like ,,THIS MUST BE READY FOR THE NEXT TRAILER, EVEN IF IT COST 100 HOURS A WEEK!!”

There are a lot more horse bit jokes where that came from, although that was one of our favorites.Â Houser eventually clarified his “100 hours” remark by stating it was only something that he and the senior writing team were voluntarily doing to finish their project. That’s still a bit unsettling, even if it was their choice. But at least the rest of their team will get the chance to rest and spend time with their families. We hope.What do you think about Red Dead Redemption 2‘s frozen horse bits feature? And is any video game worth a 100 hour work week? Let us know in the comment section below.