Radiant Offline Battle Arena is the Ultimate MOBA for your Tabletop

Each week here at Geek & Sundry we’re taking a look at new and upcoming exciting titles on Kickstarter! This week’s Kickstarter of the week is  Radiant: Offline Battle Arena, a head-to-head card game that brings the exciting action and strategic challenge of Multiplayer-Online-Battle-Arena video games to the tabletop! The Kickstarter has exceeded its $14,797 (€13,000) funding goal and is past $18K in funding as of this writing.

Radiant: Offline Battle Arena (ROBA) isn’t the first MOBA-inspired card game to hit the market, but its streamlined rules, intuitive gameplay, and beautiful art make it stand out compared to others in the genre. This will be a great game to bring out at game night for any friends who play League of Legends, DOTA 2, and Heroes of the Storm, with instantly recognizable terminology and concepts. Over the course of the game, you will level up your heroes, equip them with powerful items, harness their skills and talents, and battle against your enemy’s heroes, all while trying to protect the three conduits that power and protect your deity. Sound familiar? 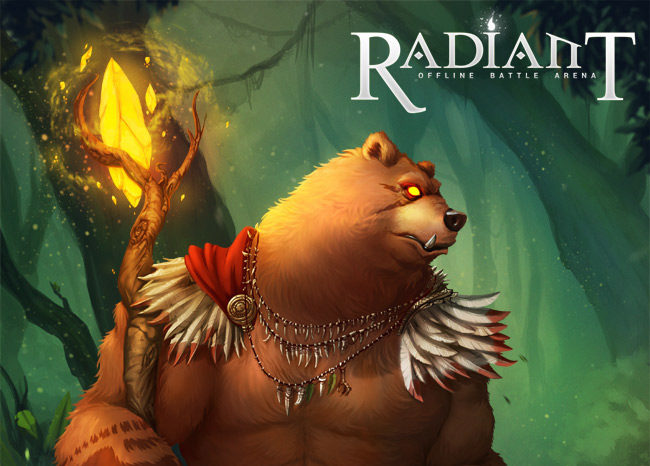 Currently on Kickstarter, the core set contains a full set of cards, which is enough for two players to begin playing right away. Players have nine heroes they can choose from, from but the real fun comes from drafting your roster—what combination of Warriors, Tanks, and Supports will you unleash against your opponent, and how will they work together in the lanes?

Your deck is formed of your three heroes’ skill cards, which represent their unique powers and abilities. The colorful, stylized art is reminiscent of video game art, and the graphic design of the cards makes them easy to read and reference at the table. Parallel characteristics across card types means you aren’t trying to remember a ton of different stats—attack, armor, and health cover most of what you need.

The genesis of the game is rooted in games academia, but not in the way you’d expect. The creator of the game, Jack Murray, was pursuing a PhD in Games when he attended GDC in 2015. When discussing his line of research, he quickly came up against various reactions from confusion to bemusement—people didn’t realize that games were even a field in academia. “Perhaps the biggest surprise to me (at that time) was just how obscure the stuff I had been reading and doing for the past two years really was,” Murray explained. He felt crushed, as though he’d wasted his time studying something that nobody cared about. “But it was also kind of liberating—all the Narratologist/Ludologist stuff I’d been drowning in suddenly didn’t matter!” When he got home, he felt challenged to try something new, and he returned to making games. What started as a sanctuary from his Ph.D. work soon overtook it.

As ROBA became more and more streamlined and polished, and Murray gained more experience in the industry, a funny thing happened: he rediscovered the relevance of his critical background and research. The time he spent away from the abstract theory gave him the clarity to design a game that was mechanically sound, from the ground up. ROBA has nothing to do with Jack’s gaming research, almost by design. The game was meant to be a break from his research, but it ended up being the culmination of what he’d learned of game design. 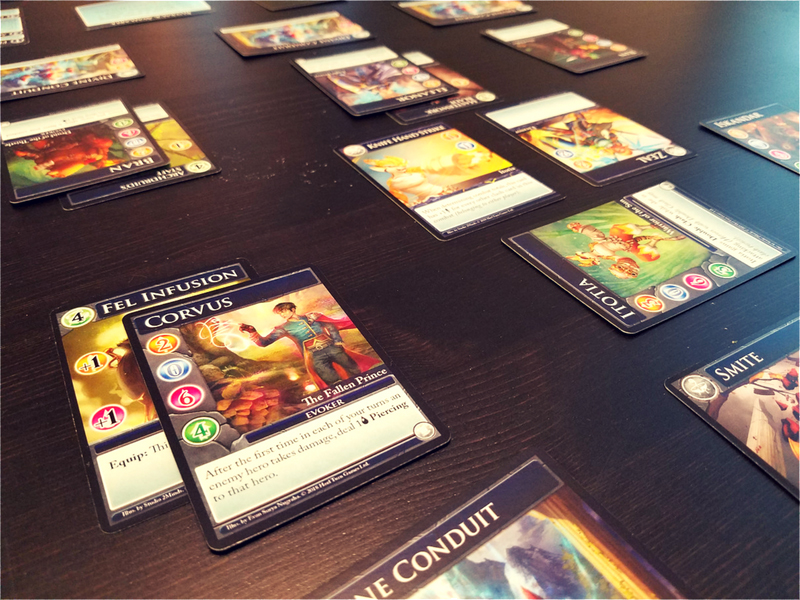 Murray’s background in games shows, albeit subtly. The gameplay feels like a MOBA, with the simple mechanics falling away in favor of a richly thematic, fun experience. The game begins with the crucial decision of assigning heroes to a lane. An elegant and simple action system covers most game abilities in a single step, with each player spending actions to attack, heal, change lanes, level up, or use a power (known as talents). If your heroes are KO’d, you can buy one back once for a price, but you’ll have to use cards or abilities to be able to return them to the battlefield again. A player can use a mass resurrection to bring back their entire team—if they’re willing and able to sacrifice one of their conduits. Before the round ends, the players have a chance to visit the shop and purchase upgrades for their heroes from a list of items chosen in secret by the player at the beginning of the game. Then, the cycle repeats.

Matches are fast-paced, lasting 30 to 45 minutes, with plenty of tactical decisions to be made each round. Do you leave your conduits undefended so that you can stage an all-out attack with your heroes? Your conduits can fight back against enemy attackers—for a time.  Do you risk ignoring the enemies’ heroes in an attempt to destroy their conduits, or do you fight them head on, not knowing for sure which skills they’ll bring to bear in the clash? Finally, with the power you’ve gained defeating heroes and desecrating the enemies’ conduits, you must choose whether to equip your heroes with powerful weapons and artifacts, or have your heroes learn from experience. Once all three enemy conduits have been broken by a player, the enemy’s deity manifests, unleashing a final withering blow to the player. It’s a race to see who can slay the enemy’s deity first. ROBA is one of those games that’s easy to learn but hard to master.

If you’re interested in trying out the game right away, you can participate in the ROBA Open Beta. Simply print off the cards from DriveThruCards for free, and get started using the Learn-to-Play Booklet.

You can get in on the core set on Kickstarter, as well as score yourself some of the very first “skins” for the different heroes. In addition to ordering the base game, backers can add UltraPro game playmats to their order to represent their favorite hero at the table. You have until August 24th to enter the arena!

What are your favorite tabletop MOBA games? Tell us in the comments!

Note: A free preview copy was supplied to the author for review purposes.

Play RPGs from Your Phone at Your Own Pace with RoleGate