Finding the right webcomic can be tricky with all of the stories floating around the internet ether. But luckily you have trusty friends like us to to make glowing recommendations! Something I’m obsessed with is Questionable Content by Jeph Jacques. It’s a romantic-ish, slice-of-life comic that’s been going for a whopping twelve years, featuring a headstrong talking robot. What’s not to love?

You first get introduced to Marten, a young but jaded office-slave who’s into the indie-rock scene (prepare to learn the names of lots of obscure bands). You’ll also meet his roommate Faye, an employee at Coffee of Doom, the same shop that Marten’s ex-girlfriend Dora, a metal-loving bisexual goth, operates. There’s a host of supporting characters of course, but the one you need to hear about right now is Pintsize, the aforementioned talking robot. He’s Marten’s mischievous AnthroPC who loves cake batter and making crude jokes at the (affectionate) expense of others. Pintsize’s dialogue is nice and snappy, and his dry humor really characterizes the series. 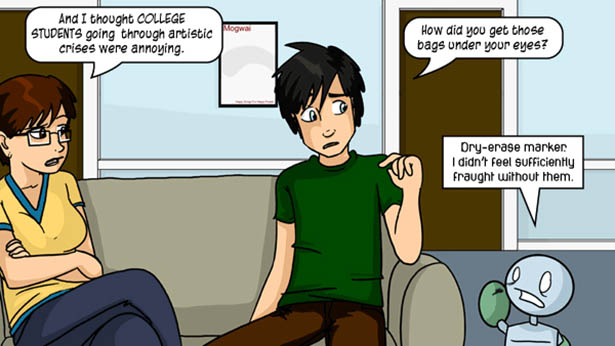 As the comic progresses, the art becomes more varied and expressive. For me, that was rewarding to witness as a reader. It sounds corny to say, but because there are over 3000 strips now, tracking it’s growth is kind of cool. He even writes a few notes under each strip about his overall creative process, the god-awful stress and exhilaration of updating it five days a week, or something specific about that comic he wrote that day. He’s also not afraid to mention problems he had with the characters or the art, which make the notes section one of the most unique parts of the comic.

On the character front, it’s entertaining and frequently hilarious to experience the evolution of Marten. He started off depressed and lonely, but you’ve got to push through those times, I swear. He becomes much more complex and well-rounded as the comic quickly finds it’s footing. I personally love how he relates to women, and so does Pintsize. That little dude consistently shoots off hysterical dialogue that feels like an unofficial commentary to Marten’s up-and-down, zig-zaggy love life.

If you’re looking for a new webcomic that’s about people talking to each other, look no further than Questionable Content. Because of it’s straight-forward plot structure, it’s super easy to pick up and dive right in, no matter where you fall in the comics-reading spectrum.

Are you going to start this comic over the holidays? Do you already read it? Reach out on Twitter, or sound off in the comments below.