Protect The City Of Aegis From The 'Edge Of Darkness' - Nerdist

Protect The City Of Aegis From The ‘Edge Of Darkness’

Each week here at Geek & Sundry we’re taking a look at new and upcoming exciting titles on Kickstarter! This week’s Kickstarter of the week is  Edge of Darkness by Alderac Entertainment Group (AEG) which has exceeded its funding goal of $50K and is currently funded for over $250K as of this writing.

If you’ve played Mystic Vale, you’ll have some experience with AEG’s new card-crafting system, which lets you adapt the very cards that you’re playing with, making each game a little different. You might not know that before making Mystic Vale, designer John D. Clair had much bigger plans for the card-crafting mechanic. As with Dominion introducing the world to deck-building, it was decided that Mystic Vale would be published first to introduce people to card-crafting. Now the world has been deemed ready for what card-crafting was meant for: Edge of Darkness. 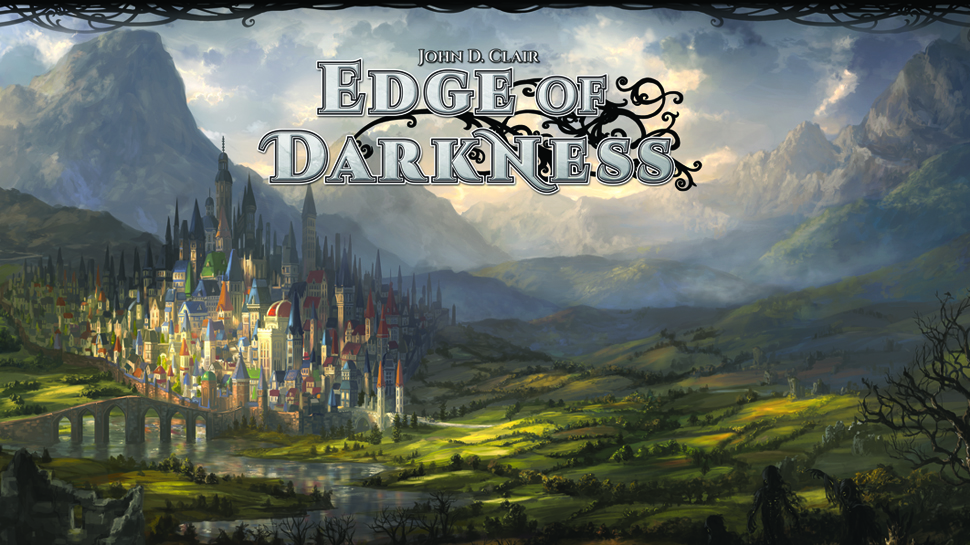 Currently on Kickstarter, Edge of Darkness casts each player as the leader of a Guild tasked with defending the city of Aegis, which is built next to a growing army of monsters known as the Blight. When Blight attacks, the Guilds are expected to defend the city, but while the Blight lies in wait, the Guilds are vying for political, economic, and military control of the city. 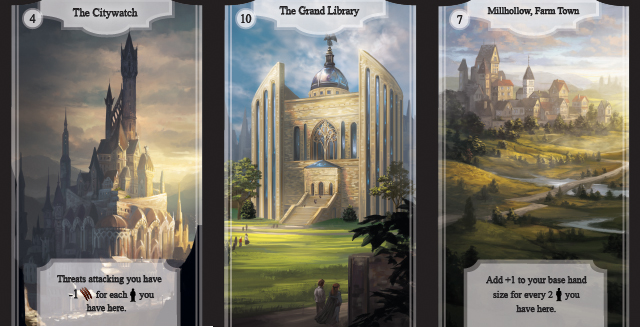 This is done through the card-crafting mechanic I’ve been talking about. Each turn, players will be able to take one of ten advancements, which are tied to specific locations, and slot them into the plastic sleeves that hold the cards. From now on, the card has an extra ability that can be used by whoever draws it. And yes, anyone might draw that card because the deck that you use is shared.

You might think this sounds simple, just build up the cards with the best advancements, but there’s something else to consider. Each card is double sided, and on the backs of the cards are the monsters that you’ll need to face. If a card is fully advanced it will have three different monsters you’ll have to face if it comes after you, which brings us to another of Edge of Darkness’ unique features: the Threat Tower.

Every turn players will be dropping randomly selected cubes (matching the colors of the players) into the Threat Tower. These will drop into three different trays corresponding to the three monsters that are waiting to attack. If your color comes up the most, they’re gunning for you. Of course, if you can handle it, you might want to take the fight to them, which could earn you even greater glory.

Besides the tight mechanics, the components themselves are just fun to play with. Card-crafting is a great idea and it makes every game feel unique. The Threat Tower is wonderfully nerve-wracking as cubes fall in and you pray that yours don’t end up in front of that one strong monster. The different locations are all beautifully painted, and with the Kickstarter smashing through its stretch goals, there will be over thirty different ones to choose between when you start your game.

Edge of Darkness comes together to make a surprisingly unique gaming experience. Even though you’re bitter rivals, it’ll almost feel like you’re working together with your opponents, everything you do making the shared deck stronger. Sure you have to pay to use their cards, but we’re all in this together right? Saving the town from the Blight? What’s that, you’ve played me this entire time and now you rule the city? Ah…I see what you did there. Want to try again?

You can secure a copy of Edge of Darkness by backing the (already funded) Kickstarter, but you’ll have to hurry as you only have until March 23.