Does a '70s Educational Video Hold the Key to POWERS OF X? - Nerdist

Does a ’70s Educational Video Hold the Key to POWERS OF X?

The long-awaited new X-Men line has hit shelves and fans are falling over themselves with praise for the two flagship titles House of X and Powers of X (pronounced “powers of 10”). With art from Pepe Larraz on House of X, R.B Silva and Adriano Di Benedeto on Powers of X, colors by Marte Gracia, letters by Clayton Cowles, and unifying graphic design by Tom Muller and writer Jonathan Hickman, the first two number ones have been widely well-received. As fans are enjoying deciphering the design-heavy comic trying to unlock its secrets, we’ve uncovered a surreal and strange video from 1977 that might’ve been a huge influence on Powers of X, which hits comic bookshelves today.

If you’ve ever studied graphic design, fine art, architecture, or furniture design, you may well have been shown this video made by iconic chair designers Charles and Ray Eames. The video, which is called Powers of Ten (sound familiar?), is a trippy exercise in the design idea of the titular power of 10. The Eames’ website describes the theory and video thusly:

“Powers of Ten illustrates the universe as an arena of both continuity and change, of everyday picnics and cosmic mystery. It begins with a close-up shot of a man sleeping near the lakeside in Chicago, viewed from one meter away. The landscape steadily moves out until it reveals the edge of the known universe. Then, at a rate of 10-to-the-tenth meters per second, the film takes us towards Earth again, continuing back to the sleeping man’s hand and eventually down to the level of a carbon atom.”

So what does this have to do with Powers of X aside from the obvious reference in the name? Well, the framing of the first issue is actually centered entirely around the concept from the educational video. The idea of “adding a zero” or moving through time/space at the power of 10 is referenced in the opening as we see a page split by four horizontal panels, each of which showcases a different era from the apparently revised X-timeline. And if you notice, each panel and era goes up by the power of 10, beginning with X-Men Year One, followed by X-Men Year Ten, the X-Men Year One Hundred, and finally X-Men Year One Thousand. 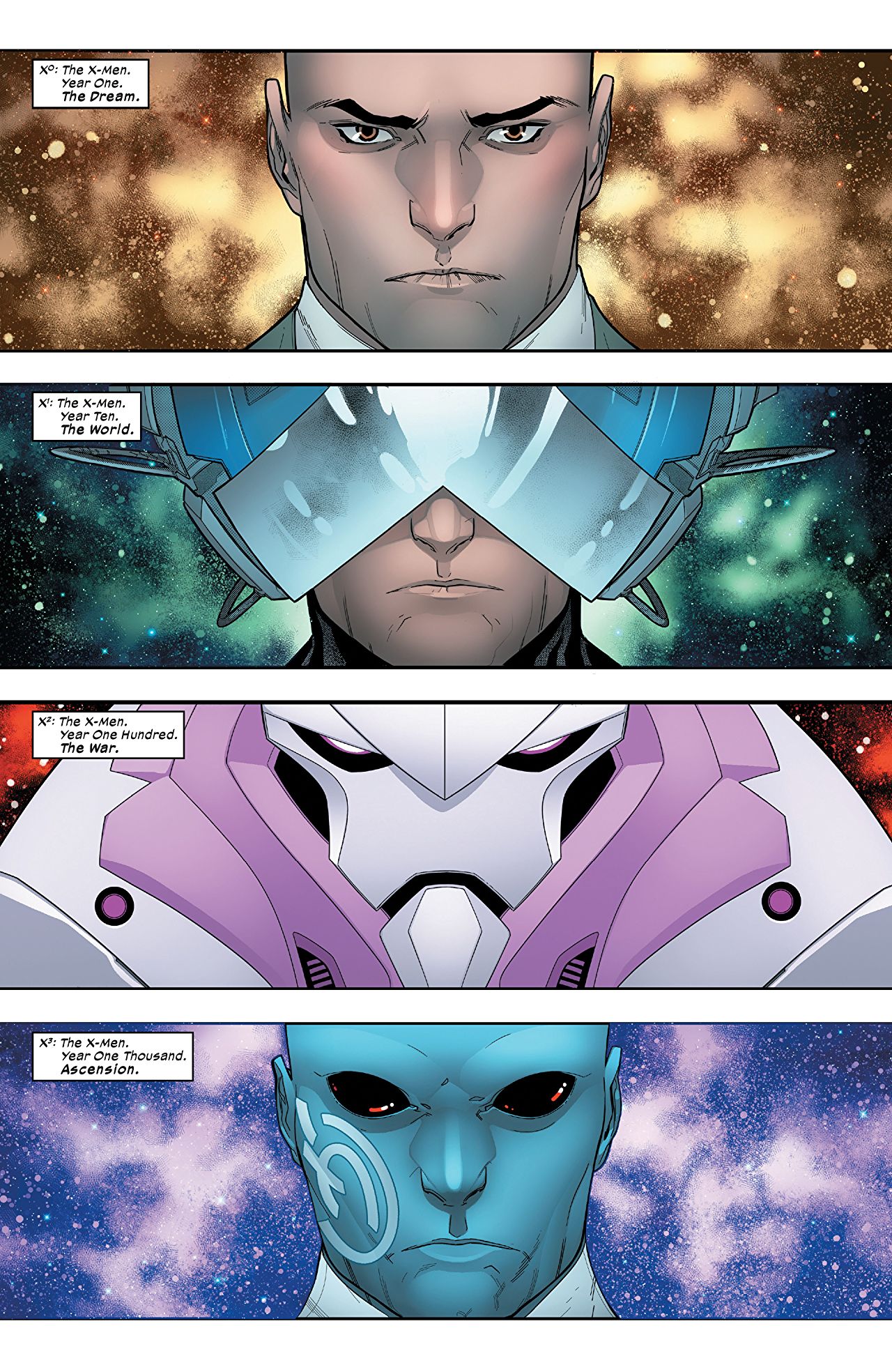 Writer Jonathan Hickman has a background in graphic design and so he’s likely seen this video many times throughout his education and career. He’s also known for creating immersive infographics and graphs, which populate both of the debut issues. So what else can the Powers of Ten video tell us about the potential future of the six-issue X-Men series? Well, the expansive space storytelling of the first issue echoes the first section of the video, which uses the power of 10 to expand the viewer’s vision into the wild epic landscape of space.

So it’s pretty likely that the second issue might revert that, either using the same technique to go even further into the past or perhaps, just like the video, inside the bodies and inner workings of the mutants at the center of the story, especially with the mysterious medicines that Xavier has created as a way to get humankind to recognize the sovereignty of Krakoa and the mutants.

We’ll have to wait until the series is done to truly find out the impact. But for now, have fun watching the Eames’ masterpiece and dissecting just what it could mean for the X-Men.