Poncho Makes a Huge Leap Into a Desolate Future - Nerdist

Poncho Makes a Huge Leap Into a Desolate Future

Most of the time, when an apocalyptic game presents itself, it’s dark and decadent with a kind of “fight for survival” setting where the lead character struggles for even the slightest glimmer of hope towards a brighter tomorrow. However, things are a little bit different with Delve Interactive’s Poncho, which releases later this month for consoles and PC.

In the game, a quiet robot named Poncho finds himself in the wake of a nuclear apocalypse, where everything has collapsed around a large, mysterious tower looming in the distance. In order to try and create a worthwhile dystopia–and maybe bring a personal piece of mind to himself–Poncho will have to venture into dangerous lands, using platform jumping to get around while solving occasional puzzles and doing things for others.

It’s a classic structure of old-school platforming, with more of a reliance on skill-based play rather than using complex combos to defeat enemies. In fact, Poncho is built around non-violent situations, with the cute little robot able to jump back and forth between three different platforms, controlled by pressing triggers on top of the control pad. This ability comes in handy quite often, especially when Poncho hits a brick wall that he can’t get around, or tries to collect more energy icons located in an out-of-reach space.

At first, the platforming technique is easy to learn, but as the Poncho journey continues, players will see more interesting challenges arise. For instance, in some cases, a magnetic field will be activated, forcing Poncho to find another way around instead of simply jumping to the next platform (since he’s blocked). In others, moving platforms will be introduced, and he’ll have to figure a way around them without falling off or getting “crunched” in order to get to the next area. 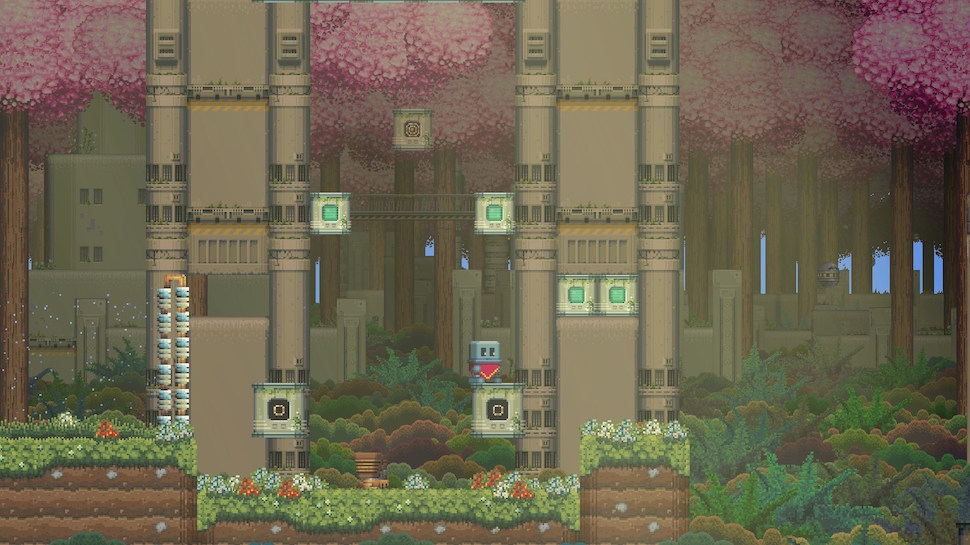 While challenging, the game isn’t impossible, as players will have unlimited lives to work with so they can simply try again if they succumb to something in the world. It also presents an interesting exploration angle, as Poncho will occasionally need to find keys to get through doors, as well as activate other robots throughout his journey. Other characters appear as well, with simple yet interesting statements that remind you that, yep, you’re smack dab in the middle of the apocalypse.

With charming Super Nintendo-style visuals (with the neat warp tripping event each time you jump across a platform) and a charming musical score, Poncho definitely captures an old-school vibe, and the platforming has its fair amount of challenges as well, particularly in the later stages of the game. It all ties together into a beautiful world, filled with a mixture of desecrated junkyards, lush forests and more. In Poncho‘s case, the journey is just as important as the destination.

Players will be able to discover this wondrous (albeit slightly haunting) place for themselves when the game releases in October.