Polymorph Your Friends Into Critters With These Essential Episodes - Nerdist

Polymorph Your Friends Into Critters With These Essential Episodes

It’s only natural to want to share your love of Critical Role with your friends. But with over 60 episodes clocking in around four hours each, telling them, “You’ve got to watch this show. Just start at the beginning!” might make them quit before they’ve started.

If they’re giving you just a few episodes to convince them, here are five picks for action-packed, humor-filled episodes with some of Vox Machina’s greatest adventures to hook them.

Pick one episode, or all of them, and invite your friends over for a long evening. They’ll transform into Critters right before your eyes.

The Story of Vox Machina

While it’s not the typical Critical Role experience, starting with the origin of Vox Machina can save you a lot of time answering, “Who’s that guy?” This gorgeously illustrated recap, narrated by our favorite nerdy-ass voice actors, tells the story of the group’s first adventures before they took over Twitch every Thursday night.

If you haven’t watched it recently, or you missed it during your own Critical Role binge-watch, take the time to sit with your friends and watch “The Story of Vox Machina.” You might learn something new about your favorite adventurers too.

Within the first few minutes of this episode, Scanlan makes his mark on the floor of the temple where Pike is staying. Trust me, your friends will immediately get to know Mr. Shorthalt.

Vox Machina has arrived in Vasselheim for the first time, and before they get very far into the city, Grog rushes to fight in the arena. With an incredibly brutal hand-to-hand fight in the pit, followed by an impulsive battle that will have repercussions for the group later, pick this episode if your friends are the type who appreciate more action than role-playing. 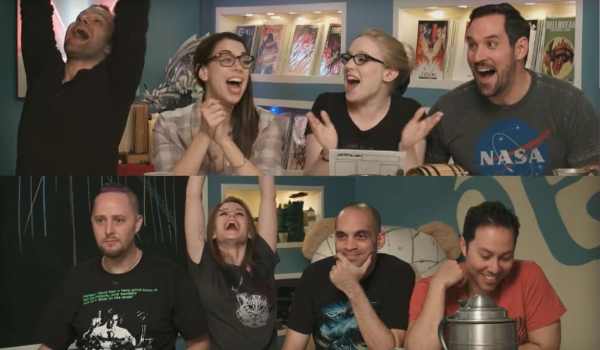 It’s Vox Machina against the wicked Briarwoods for the first time in this tense episode. Vax’ildan has been captured by Lord and Lady Briarwood, and as the episode opens, he faces them alone. If that doesn’t ensnare your friends’ attention, Matt Mercer’s glorious narration and Vax’s thoughts during the suspenseful fight showcase the incredible role-playing the group is known for. Later, official Critical Role artist Kit Buss joins in the fray, and the group finds themselves in another fight that will have significant consequences.

Race to the Ziggurat

Vox Machina is in the town of Whitestone to finish the Briarwoods once and for all. The adventurers head down into the depths of the tunnels beneath the city where they come across a mysterious room that blocks their path. As the story progresses, Percy and his storied background shine in this episode. If your friends are more the type who enjoy role-playing and puzzles that require more than swinging a sword, you’ll be yelling, “Break the gem!” at the screen together in no time.

Later, the final showdown with the Briarwoods will leave everyone on the edge of their seats. Role-playing, puzzles, and action combine to make this one of the best Critical Role episodes ever.

For longtime Critters, all I have to say is “Feel the Gern,” and you’ll immediately remember what this episode is all about. Vox Machina comes across Gern Blanston, a hapless Dragonborn wizard, on their quest to defeat the dragons of the Chroma Conclave. If your friends love to laugh (and who doesn’t), guest Chris Hardwick will have them rolling in no time.

While this episode is a relatively quick adventure to close a rift to the Elemental Plane of Fire, Vex’ahlia also makes a decision that has lasting repercussions on her character.

Now that your friends are convinced that Critical Role is their favorite new show, don’t forget to send them over to the excellent New Viewers Guide on Reddit for more help on the road to full-fledged Critter-dom.

What are your must-see episodes when introducing friends to Critical Role? Share them in the comments!