Playing Point Salad on your next family game night is much easier than nagging your kids to eat their veggies! This quick and fun card drafting game is for two to six players and plays in about thirty minutes. With over 100 ways to score points, you’ll have to think and plan ahead to make the perfect salad of points to win it all. 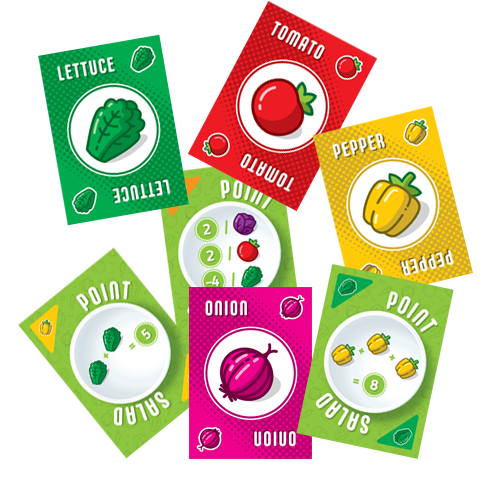 Setup is based on the number of players sitting around the table. The cards are shuffled and placed into three draw piles with the point combination sides up. (Point cards show different combinations to choose from to earn points, like two lettuce cards are worth five points, three peppers are worth eight, and so on.) Then flip over two cards from each draw pile veggie side up to make the market, and play begins!

Let Becca Scott show you how to set up the game table and start on your veggie venture in this episode of How to Play.

On their turn, the player will either draw one card from the points deck or choose two veggies from the market to add to the tableau of cards in front of them. The player can also choose to turn a points card into a veggie card, but not vice-versa. Restock the market, and play continues with the next turn. Players will have to think fast to cultivate a crop of the most points before all the cards from the decks and market are drawn.

At the end of the game, calculate points based on the scoring of the points cards you collected and the veggies in front of you. The same veggie can be used in more than one point calculation, so the points can really add up if you draft your cards right.

Point Salad is easy to learn and can be played practically anywhere, but that doesn’t mean it’s light on strategy. Plant the seeds of your bumper crop of points early and you might just win it all! Look for the game this month from Alderac Games.