Play the Detective In CITY OF MIST’s New Campaign Supplements

Two years ago,  City of Mist burst onto Kickstarter with an intriguing mix of modern game mechanics and classic noir storytelling. Son of Oak Game Studio returns to Kickstarter this year to reveal a little more about this mysterious city and the powerful people within by way of their fully-funded City of Mist: Nights of Payne Town project. Fans of the original game will find a lot of new information in the new books of this campaign. Gamers new to City of Mist will find a new format for the core rules that makes hitting the streets even easier.

City of Mist is a game that mixes the mundane lives of normal people with legendary powers. Players create characters called Rifts made up of four themes filled up with character tags. If your character is hot-headed, that tag will give them a bonus to the roll of two six-sided dice to any moves where having a temper would be beneficial, like getting into a fist fight or intimidating a bad guy. But if that tag would interfere with a roll, such as keeping cool when being dressed down by a superior or staying put when seeing a friend double-cross a plan in secret, that becomes a negative modifier to the roll. Fans of indie game systems like Apocalypse World and Fate Core will recognize a lot of elements in City of Mist, but they’ve been remixed and put together in different ways to make an intriguing system on its own. 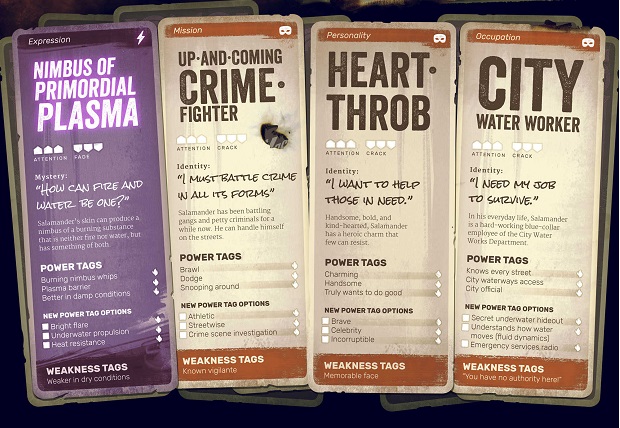 Each theme is devoted to a question of identity or mystery. The questions drive play as characters strive to discover the answers to their mysteries or resolve challenges to their identities. The balance between identity and mystery also shapes the strange powers each character gains. Characters have awakened to powers taken from legendary sources such as gods, monsters and even fictional characters like Red Riding Hood or Captain Hook. The more mysterious themes a character has, the more powers they have access to. A crime boss that’s connected to a legendary dragon might be able to fly and breathe fire.

On their identity side, they might have access to a lot of wealth and a crime family to do their bidding. Characters don’t stay static; they either have to resolve their questions or watch as their themes drift away. When that happens, the theme flips to the other kind. That encourages players to deal with both the mystic and mundane side of their stories. If they choose to stick with one over the other, they can lose their mystic side altogether…or become the living embodiment of their legend and forget the mortal world entirely for a time. 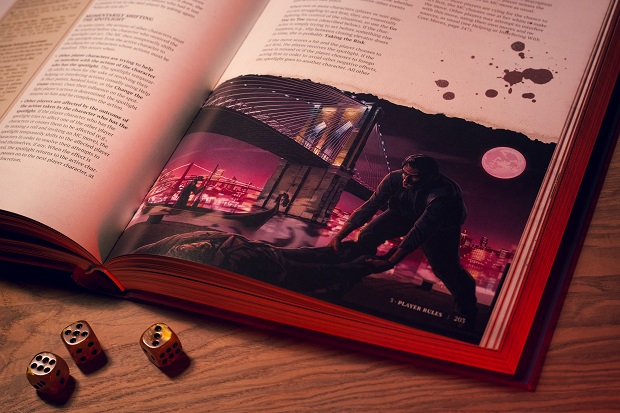 The original City of Mist was released in a massive 500-page purple tome full of gorgeous art, tons of advice and plenty of player options. A book that size can be a little intimidating to new players or even experienced players curious to see what’s going on in a game. There’s a downloadable Starter Set for anyone that wants to try it out, but Son of Oak listened to customer feedback and opted to split the new printing into two smaller books; one for players and another for MCs (GMs). Fans of the game or anyone who wants to see the full depth of the mechanics can pick up these books as part of several levels of Kickstarter pledges.

For returning citizens of the City of Mist, two new books created by the Kickstarter contain the answers to the mysteries of the city. The first, Nights of Payne Town, is the first campaign book for City of Mist. Each of the 10 cases included can be run individually or they can add-on to a massive story pitting the players against a mysterious Avatar trying to claim the city as their own. The second is the Shadows and Showdowns Campaign Book, full of additional information on the city, such as the more unusual parts of town, information on the mysterious Gatekeepers who keep the peace between the Rifts and a potential future disaster the players might cause…or help to avoid.

Nights of Payne Town is on Kickstarter through August 31st. Fans who backed the original will get PDF copies of the books created for this run and a discount on any book orders as a thank you for helping City of Mist getting made in the first place. The time has come to shake off the rain, pick up Mjolnir and head into the neon noir streets of the City one more time.

Which RPG campaign settings do you love? Tell us in the comments!